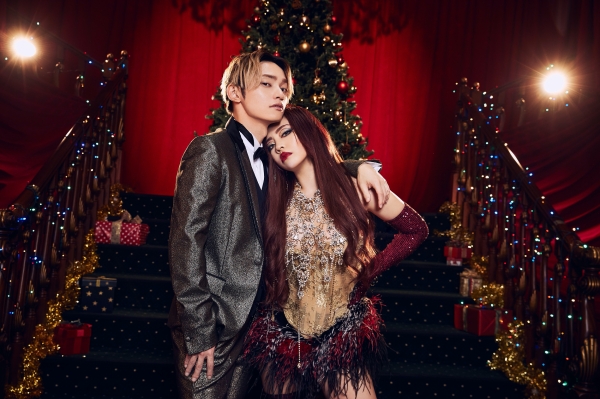 Hello everyone! Or no one. At this point, not many know about this blog compared to my K-pop blog, so I’m effectively talking to myself for now. Yes, I also write about K-pop – tremendously like an idiot, but I try. If you’re interested in K-pop, I’d recommend checking out the site ~here~ If you’re from my K-pop blog, welcome! I hope I will be able to deliver the J-poppy content you deserve!

Starting with weekly reviews. But, disclaimer: J-pop is waaay harder to keep track of in terms of weekly releases, at least compared to K-pop. Hell, the K-pop subreddit has a neat little “This Week in K-pop” section that lists weekly releases, top posts, top live performances, and the like. The J-pop subreddit…is a bit of a disgrace in comparison.

So thank GOD, a good YouTuber, Mr. or Ms. theDX3, seems to be putting out weekly J-pop roundups, so I will just review the ones that come out of that channel. Let’s hope it lasts. Now, onwards. Let’s see if we can discover new J-pop content together!

For the first ever song of this roundup, of my Japanese roundup (you can tell I’m excited, right?), this one’s actually kinda meh. She definitely has a unique voice, but the song isn’t quite there.

Jr.EXILE – WAY TO THE GLORY

Junior EXILE? I got a confession – I’m not familiar with typical J-pop groups so this will be a learning experience for me too. EXILE I think I’ve heard of, though. This song is…incredible but not in the good kinda way. I think it was the music video but I did want to laugh all of a sudden. Their goofy smiles don’t help.

Well, I find this one better than the last song by a longshot. I would say this is an above average song. Wouldn’t mind listening to this again.

Oh, I just looked this group up and apparently these guys were in the Japanese version of “Produce 101.” Incredible. For those that don’t know, Produce 101 is a competition show based in South Korea where new and old idol hopefuls aim to get a spot in the group set to debut through the show. Don’t know if the Japanese show was riddled with the proven accusations of rigging like the Korean counterpart was, but hey, this group is still around unlike X1, so I guess not?

You probably figured that out by watching the video, so you now that this is a song for the fans and anyone whose familiar with fan songs in K-pop knows that they tend to be way too sappy for non-fans. At least this one is more upbeat and “genki” than most K-pop fan songs. Enjoy, JAMs.

Getting introduced to J-pop boy groups is a fascinating process.

Wait, scratch that, apparently this is just a collaboration and more members may or may not join. Thanks, Kprofiles, for clearing that up. Song isn’t that stellar though.

Woah, how did you sneak into this list, TVXQ?? I didn’t even know it was them until I clicked the video. Hmm, technically I should quick them off, but I’ll keep them in, I guess.

He sings acoustically for the first 50 seconds but he launches into an actual song so don’t worry unless you tapped out already. Despite the somewhat lackluster start, the song feels like one I’d listen to while laying in bed staring at the ceiling, so not too shabby. Kinda creepy at the end though with the woman’s eye staring at you.

Only Japan can do animations like this. Ugh, so good. As for the song, it’s alright. Definitely fits the music video but I more interested in what this is for. Though a comment said the girl looks like an older version of Uraraka and the boy looks like a younger version of Midoriya (both for Boku no Hero Academia) and…I can see it.

This song is actually not bad. Gives me some feel good vibes that I need right now by just the melody alone.

Normally I wouldn’t put songs that have no music video (at least on my K-pop blog) but I decided to give it a try on here for the time being just to see if there’s any treasures to be found. This one is okay. I think I’d like the instrumental better of some parts of the song.

I recently got into Polkadot Stingray this year. Literally, three of their songs was on my top 5 songs of Spotify’s 2020 playlist. I’d love to get their new album coming out in a few days but I’m broke. I do plan on to create a dedication post to them though so stay tuned for that.

Song is nice, by the way.

More guitar in this one and my appreciation is great. As the song started to pick up, I found myself nodding along to it. Still, it’s lacking a little something something for me to fully rock out to. Like the chorus though.

Oh my lord, I wasn’t expecting the singer’s voice to come out the way it did when she started singing. Not sure if I like it or not. The song is okay.

Oh my, this is something. What is this for – some twisted otome game or what? Weirdly, it reminds me of the songs that have come out of Hazbin Hotel. Even stranger, I don’t hate the song but it’s a grower for sure.

Warning: Video starts of with the dude eating and slurping food so if you ain’t about that life, I’d suggest just skipping the video cause the song is so-so.

Hey, I’ve heard of these guys…they must’ve done an anime opening or ending or something. The song is meh but I appreciate them dancing.

Within the first 20 seconds, I knew this wasn’t it for me. Pass.

Our first Christmas song of the list. It’s just a still image throughout so docking major points from that. Song isn’t anything special either.

This song would’ve been okay if it wasn’t for the weird “doo dooo” organ pipe-like sound that permeates the song here and there. Actually, I think it’s quite lackluster. Her cuteness can’t save this song for me.

So, this is the main vocalist of Asian Kung-fu Generation, a band I used to listen to a lot back in my grade school days. Not so much anymore but I get a nostalgia trip diving through their oldies but goodies. This song isn’t hitting me AKFG’s good songs though.

Well, you’d be hardpressed to find this sound in K-pop so I appreciate listening to harder stuff like this. With that said, I’m not completely feeling the song but I’ll definitely give it another listen.

Didn’t we just have an EXILE group? Song has those future bass pop vibes especially in the chorus. A genre I tend to like but with these guys, not so much.

NEWS…I think I’ve heard of them. Though just like the boy groups before them – pretty meh material they’re giving us here. Oh, they’re from Johnny’s…that controversial company that even I’ve heard about. Says a lot.

Well, this one kinda slaps you from the start compared to the drag that was the previous song. I think the use of putting those random phrases in different languages makes the song a bit awkward sounding especially the “bueno bueno bueno” part but I can’t hate this song for some reason. It’s just stupidly funny.

Another Christmas song. Out of the K-pop and J-pop Christmas releases I’ve reviewed this week, this one is my favourite just because it’s not the usual sentimental sad sad ballad or contrived sappy sugary vibes a lot of theses songs tend to lean to in song and video. It’s kinda dumb but I like stupid fun like this.

It’s kinda mesmerizing at first. Not too into it once it takes off though.

Again with the animations – gonna seduce me into giving it a better review. Yet, I won’t be swayed. The song isn’t as whimsical as the music video is. Oddly, I felt like the song doesn’t quite match the video? Probably just me.

Well, that’s it for this week. I hope that this series becomes a long-running thing but if not, I hope those who read until the very end enjoyed it at the least. Maybe you even found a song you liked? Stay tuned for the next installment of this series because this will probably not be the usual day I put these reviews up.