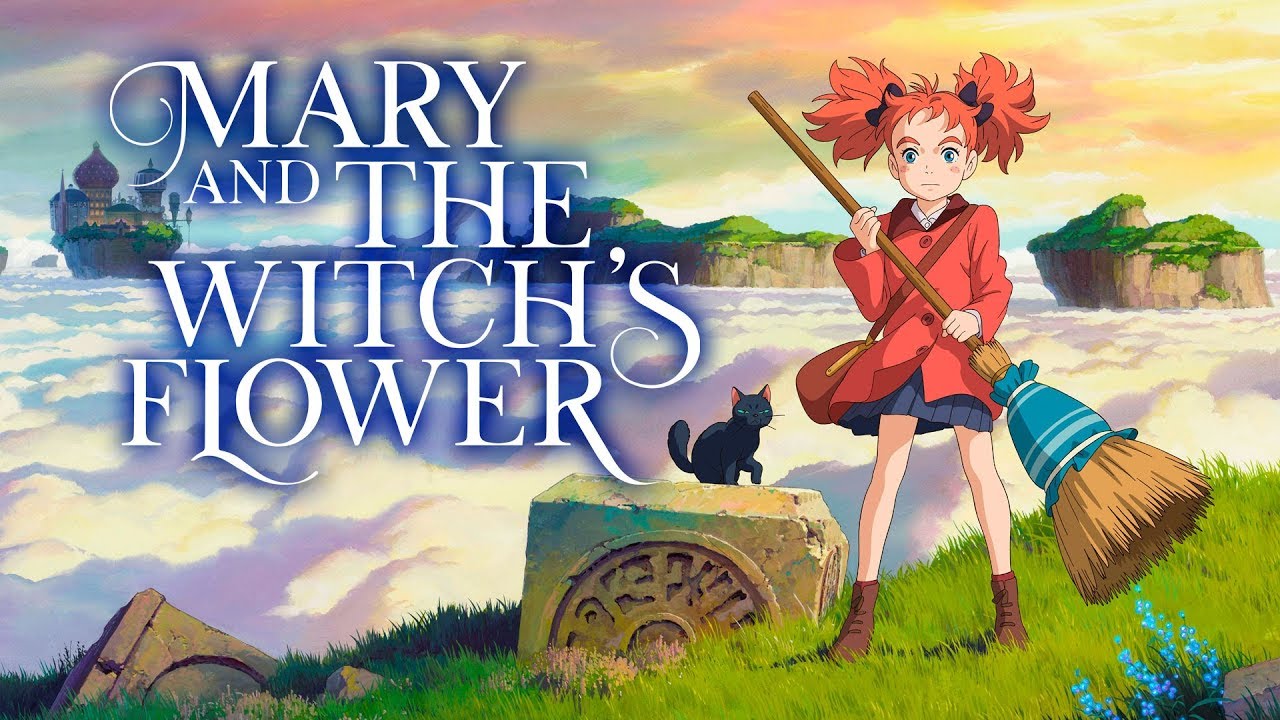 Movie Thoughts, Opinions2 Comments on The Magical Story of Mary and the Witch’s Flower

The other night, I rewatched the debut film of Studio Ponoc called Mary and the Witch’s Flower. It came out back in 2017, but I hadn’t watched it since then and felt the sudden urge to watch it again this week.

Disclaimer: Of course, I’m not a professional reviewer. I only have two semesters of screenwriting under my belt and with that knowledge, I shall commence my review.

P.S. Spoilers for this movie, of course.

I. The New Studio Ghibli?

If you’re squinting at the poster saying: the artwork looks familiar…

Then you’re not wrong because if you didn’t know, Studio Ponoc was founded by former Studio Ghibli lead film producer, Yoshiaki Nishimura, along with director and lead animator Hiromasa Yonebayashi also from Studio Ghibli.

Apparently, about 80% of the staff that worked on this movie, previously worked at Studio Ghibli. So then, how did the new animation studio fare with this movie, their first after branching off from the critically acclaimed and world renowned studio?

II. Quick Stats for Mary and the Witch’s Flower

Not too bad, honestly.

Now, I do realize even before I read a couple reviews about the movie that Mary and the Witch’s Flower is not a very new concept. Hell, the movie staff knew that it would be heavily compared to Kiki’s Delivery Service, a Studio Ghibli gem that after almost 4 decades still remains popular and loved in the hearts of many across the world.

While yes, both protagonist are witches with black familiars, I would say to any that loved Kiki or who just love the witches genre to give Mary a chance.

Both are great witches in their own right.

They basically started anew when they began Mary and the Witch’s Flower with just a handful of people before growing into the hundreds. I personally would say as a first attempt, it’s real good. Mary Smith also holds up as her own character. If you want to compare her to Kiki, then go ahead, but they are distinct enough where Mary doesn’t feel like a Kiki copycat. I liked Mary and I believe for most she can be an affable character.

In the beginning, we see an 11-year-old Mary trying to adjust to her new home and preparing for her first day at her new school as “the transfer student.” The movie wastes no time in showing us her character as being eager to help others in order to boost her own sense of self and confidence. Unfortunately, she is rather clumsy and all her little attempts fall short. Mary wants to change who she is, from her red hair which she hates, to being more capable of helping herself and others.

That lowered self-esteem is boosted when she finds the Fly-by-Night aka the Witch’s flower and finds herself at a place called Endor College, a magical institute where only the finest of witches and wizards are educated. The headmistress of the establishment, Madam Mumblechook, takes a particular interest in Mary as she claims the child is a prodigy. From her red hair, black cat familiar, great broom skills, and her affinity for magic – she has all the signs of a master witch.

Of course, Madam Mumblechook along with a Doctor Dee are our antagonists of the movie as both prove to be obsessed with the Witch’s flower and use Mary to get to them. Even kidnapping a poor boy named Peter to get it.

I don’t want to give too much of the plot away in case anyone proves to be interested in watching this. I will say that being influenced by Studio Ghibli and being a kids movie (for adults, too!), there is a happy ending. Though I will say how we get to that ending is a bit too easy, I’d say?

Okay, I will spoil the ending a bit, so stop reading if you want the ending to be a surprise.

So, you know how I said Peter gets kidnapped by Mumblechook and Dee? Well, they subject him to this transformation experiment that is visually beautiful but messed up in order to make this ideal being of theirs. Mary saves him by using a undo spell that removes the transformation magic and restores Peter to what he was.

V. Conclusion and My Thoughts

The problem, which I admit may be a bit nitpicky, is that they have used the same spell before to free some transformed animals that Doctor Dee had experimented on in this stronghold prison of sorts. I suppose with how climactic the need to save Peter was building up to, I wanted Mary to seek out a different solution or use a different spell to free Peter. Better yet, why not try to figure out a way to free him without using magic?

Though I admit, that last suggestion may have been more difficult to write out without seeming contrived in the movie. I only suggest such a thing because I read that at one point in the book, Mary forgoes using magic to solve a problem no matter how long it took.

Again, not sure how plausible that would have been in the movie. Yet, if they had gone that way then it would have set itself apart from other witch movies out there. In addition, it would have provided a rather inspirational message of being content with the power you possess now even if you find yourself lacking.

On the other hand, I will give the movie props for ending with Mary not relying on the flower’s magic in the end to save Peter, a solution she was going for at first. However, besides that and Mary’s broomstick conveniently gaining back energy to fly at seemingly opportune times, I didn’t have too much issue with the overall story.

The characters were alright as well. I said before I liked Mary, and of course, I found the cats adorable. As for other characters, I feel like the least memorable ones were the gardener, Zebedee, and the maid who worked for Mary’s Great Aunt Charlotte, who I found a pretty sweet old lady. Neither have a huge role in the movie but I still believe that even minor characters in Studio Ghibli films tend to have some marking trait that helps you recall them even after the movie. Or is it just me?

Overall, I’d say give Mary and the Witch’s Flower a watch, even if it’s just once in your life. It’s not a bad movie and is very reminiscent of Studio Ghibli, but still manages to show the potential Studio Ponoc has and will continue to show us in the future. I have hope that they will be able to continue improving their craft and establish themselves as a respectable animation studio in the future.

If you want to read more of my movie reviews, check out my “Whisker Away” review which I also made into a video essay if that’s more your style!