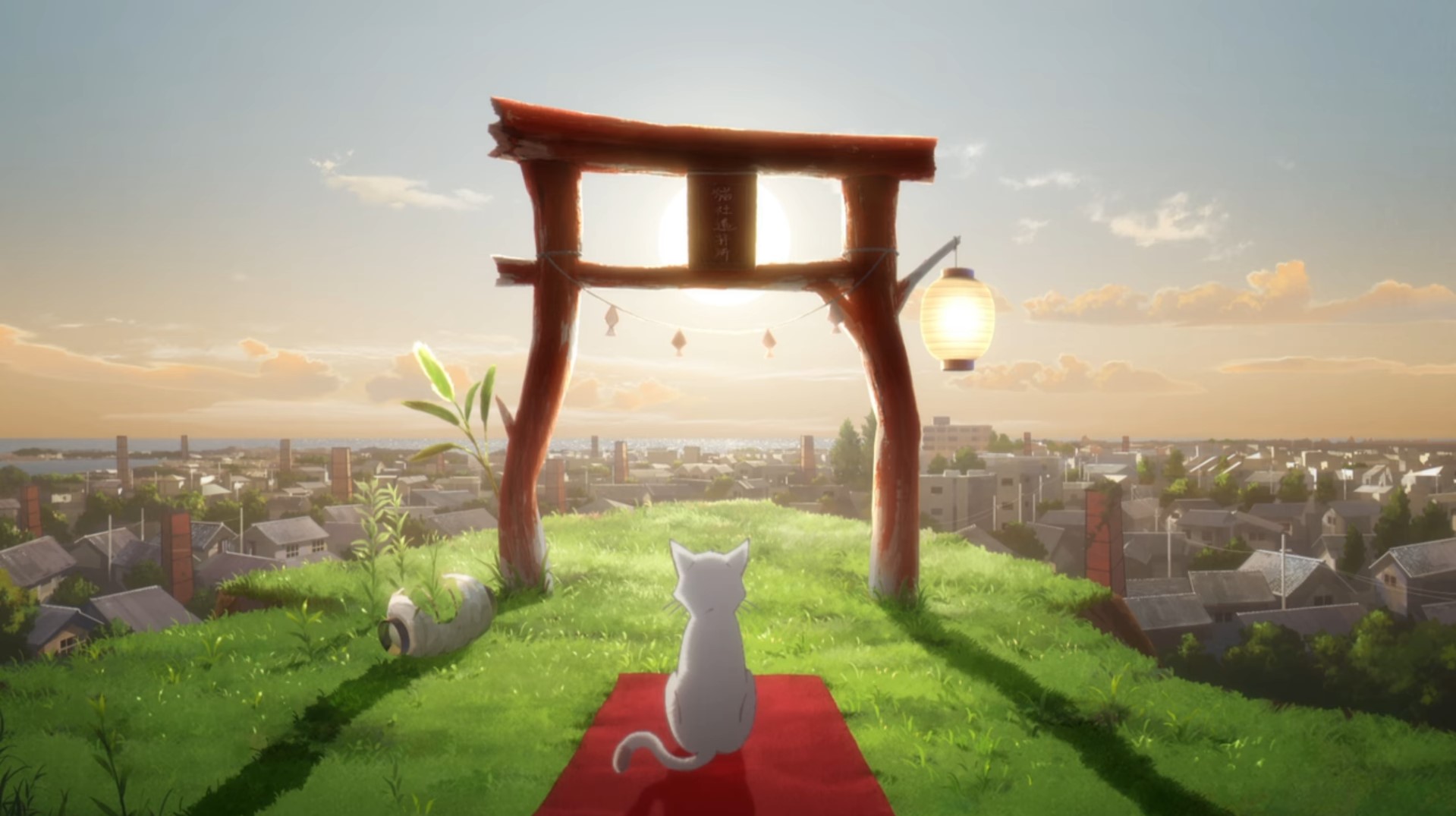 “ Hinode Sunrise is when the sun rises over the horizon and warms my soul.”

WARNING: This review will contain spoilers for ‘A Whisker Away.’ If you’ve already seen the movie or don’t care, then by all means, read on!

A Whisker Away tells the story of a lovestruck young teen by the name of Miyo Sasaki though she is better known as Muge. She adores a boy in her class named Kento Hinode who acts rather cool and indifferent to her advances. In order to get closer to her love interest, Muge dons a cat mask to transform into an adorable white kitten named Taro, who becomes well acquainted with Hinode. Just how long can Muge keep up this double act while balancing issues at home and the possibility of turning into a cat forever?

This thoughtful review has been in my mind to write up since the movie came out in June. I still have sentiments upon sentiments about this movie stored in the notes app of my phone and they’re finally going to be poured out here on this blog. I gave a basic plot summary up above, so I’ll just get straight to what I think about the movie starting from the beginning. I took a lot of notes, so I’ll try to modify them into coherent sentences.

Let’s start with the story.

I. The Story of the Stalker and the Sun

I will be honest, I wasn’t really vibing with Miyo’s character at first. She just seemed a bit too much for me personally. Her Hinode Sunrise Attack just seemed like harassment of poor Hinode amd when her friend literally called her a stalker in response to Muge saying she is “special” for being the only girl that’s closest to Hinode. She honestly reminded me of those deluded sasaengs who follow around their K-pop oppars and unnirs and think they’re “special” because they’ve gotten close to their fave whereas others haven’t. Muge also seemed to be too dependent on Hinode for that happiness fix as well which again, is similar to those stalker fans.

This would have been a major stitch in the storyline and would have turned me off to the movie if this hadn’t been explored as to why that is in later scenes (in a satisfying way, of course). I still think her behavior in the beginning is a bit iffy, but you pretty much have to understand that these kids are still in middle school and who hasn’t done some dumb stuff back then that doesn’t come back to haunt them in the middle of the night years later?

For his part, Hinode seemed at best indifferent to her advances and at worst, annoyed. The boy had incredible patience, so let’s give him that at least because I think most boys would’ve snapped at Muge after a certain point.

Muge’s only way to get closer to Hinode is to don a traditional Japanese Noh mask in the style of a cat that allows her to change into the rather adorable white cat named Taro. Where did she get the mask? From this fat cat who apparently sells masks to humans who want to be cats. It sounds weird, but it is what it is. Her name Taro (or Tarou) came from Hinode who named her after his dog that passed away sometime before the start of the movie. As a cat, Muge’s relationship with Hinode is way more closer and warmer, but that’s because she’s a cat…it’s easy to enter the hearts of people when you’re an adorable fluff ball.

So then, that conflict is established, right? Muge uses the facade of Taro to learn more about Hinode to get closer to him as Muge but it evidently does not seem to be working. On top of that, Muge’s character is further deepened by exploring her relationship with her family. From the very start of the movie, we see that Muge is not on good terms with her mother who wishes Muge would live with her and not her father and step-mother; although, Muge seems reluctant to do so. This is in spite of the fact that she is at odds with her father and step-mother who she especially works hard at keeping up a friendly persona around.

On the other hand, Hinode is also facing his own external and internal conflict. He must decided rather to follow his dreams as a pottery maker like his dear old grandad or cram hard to be accepted into a good high school in order to become a viable breadwinner for the family (Hinode does not have a father as far as we see in the movie). His conflict doesn’t have as much screen time, but I think it’s enough to establish the problems he faces.

With that said, I feel like the story was a rather adequate one. It’s not perfect by any means but it is an entertaining one and kinda a relatable one. Like, am I the only one who has wished she could’ve been a cat lazing around in the sun at one point in my lifetime? I’d be tempted to put on that cat mask too, if only for the peace of mind it would momentarily give me in this crazy world we live in. Then again, I’d have to risk turning into a cat forever…but would that be so awful?

So, we’ve already established the point of conflict in the movie, then what’s next? Even though I did warn this review will spoil the movie, I still know someone reading this may have not watched it and to be honest, I would suggest watching it. You may not like Muge at all, even by the end of the movie but I do believe the writer of the screenplay, Ms. Okada, did her best to portray Muge as a sympathetic character or at least one who you understand why she is motivated to do the things she does.

Muge is 3D. At first, she seems like this annoyingly persistent girl who doesn’t know what “no” means. That is, until you realise she feels abandoned by her own mother and ostracized by her father, step-mother, and classmates. Muge itself is translated as, “Miss Ultra Gaga and Enigmatic.” It’s a name she’s had since she was in elementary school all because the kids starting picking fun at her after her mother left her…as kids do.

She acts out like this because to hide how deeply hurt she actually is. She says so herself at the end of the movie that she closed off her heart to the people closest to her (i.e. her mother, father, step-mother, etc.) then Hinode came along and brightened up her life – her sun. Hinode in Japanese actually does have the Kanji for sun in it, so his name is fitting indeed. Hence also why she executes that infamous ‘Hinode Sunrise Attack,’ the meaning of which is explained in a quote in the beginning of this review. Yet, when Hinode turns against her, what or who really, is she to live for?

It’s better in context. I think the artists her worked on this scene were great in showing Muge’s expression in response to Hinode. Seeing her break down, is rather heartbreaking. You can tell how the others respond that seeing her like that is a novelty. I honestly believe no one especially Hinode thought she’d react like that considering she’s always so bright, cheery, and dense to rejection.

This is the climax of the movie, by the way. After this, we enter the final act. However, I won’t ruin that. I would say with all it’s eccentricities and weirdness, ‘A Whisker Away,’ is more complex and holds some themes that are less shallow then originally thought. Even after the first viewing, I thought it was okay, if not weird. On second viewing, I realised that if you sit and think about it, there is something more to gain from this story. I do feel the themes is more tied to watching Muge and Hinode grow throughout the movie than you taking it to apply to your own life. But then I saw this and couldn’t help but laugh:

So basically, stay true to yourself even towards your crush because if he/she/they are the right one for you, then yes, you’ll accepted at your worse.

III. Wanting to Cry, I Pretend to be a Cat

The heading of this section is actually the original Japanese title of the movie, and I kind of wished they’d kept it. It is by far more impactful than ‘A Whisker Away’ and is more in tune with the message the movie was trying to convey. It sounds like whoever approved the title wanted to liken it to Studio Ghibli’s acclaimed film, ‘Spirited Away,’ but I wished they would let these movies stand on their own and not be compared to other movies like that. It then leads to unnecessary accusations of this movie trying to be that movie and rendering the “copycat” a tryhard failed attempt at grabbing audiences like the OG movie. Very similar to what I said in my review of ‘Mary and the Witch’s Flower.’

Anyways, I think I’ve rambled to much. I’m not sure I came across as very coherent which is bad considering I’m going to turn this into a video but I will do my best when the time comes.

I’ll finish this review by saying for the hundredth time, yes, watch the movie if you got this far in the review and all that sounds interesting enough to watch how it turns out. I left out in order to keep this review short and to not spoil too much. I did want to share this image that is in the final act of the movie because it’s so pretty too me and would make good desktop wallpaper if that’s you’re kinda thing:

And finally, I feel like if you want to go deeper into the feels of this movie, I would recommend checking out Yorushika who did both theme and ending song for the movie. I’ll leave one of the songs, ‘Hana ni Bourei’ or ‘Ghost in the Flower’ which was the ending song. Take your pick of the official music video or the lyric video depending on if you wanna know what she’s singing about, but the feels may only work if you pick the lyrical version.

One thought on “Movie Thoughts: A Whisker Away (泣きたい私は猫をかぶる）”