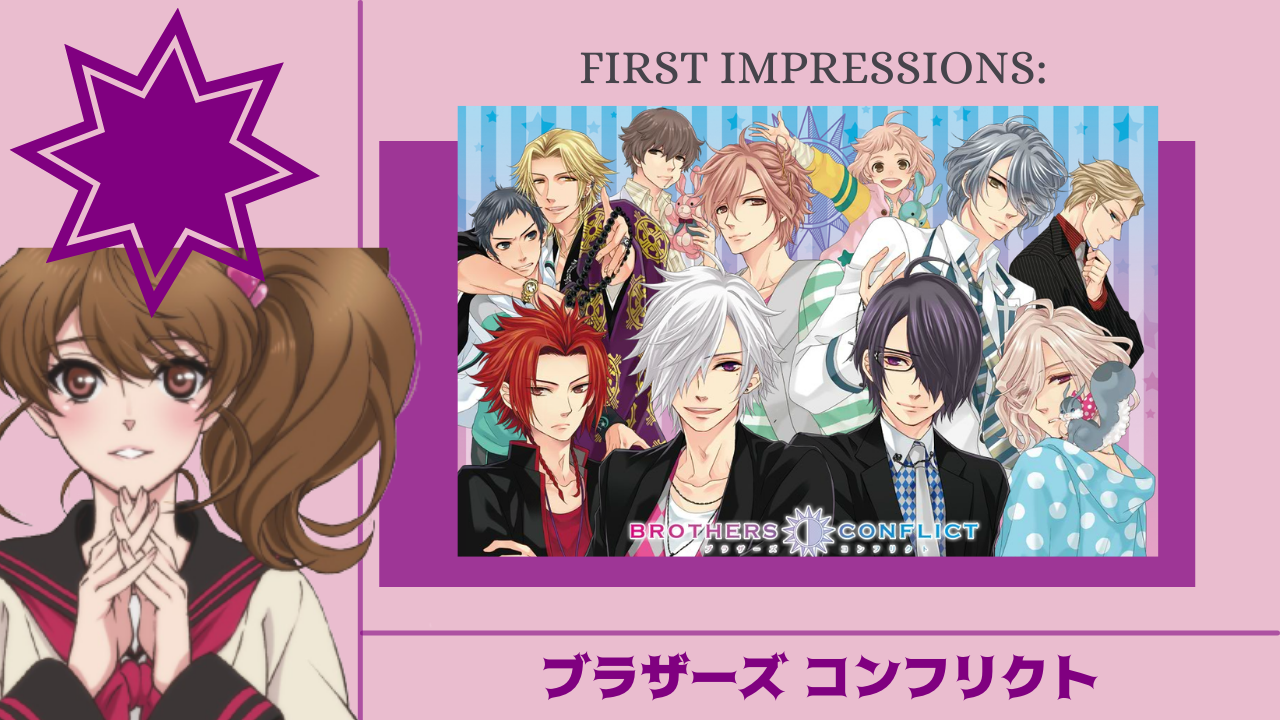 What happens when a girl suddenly gains 13 brothers after her father marries their mother? Well, just what you think. Love. Pushing aside morals and societal expectations, let’s venture into this reverse harem to see how our young heroine fares in a den of wolves.

However, let me preface by saying I never watch harem anime in general, whether that be reverse, normal, or whatever. I have seen some snippets here and there of Brothers Conflict thanks to some questionable YouTube edits and became really curious to watch it. And oh boy, it’s…not as bad as I thought it would be. So far.

But my god, this is like Hakuoki all over again. This is worse because I’m only a few episodes in and there are 13 brothers with the last one just being introduced in the 3rd episode. To not make this a mess of a post, I will just organize everything by episode – characters, story, and other details. So, episode 1 is going to be a doozy. Please bare with me.

The episode begins with Ema Hinata, now Ema Asahina, travelling to her new home where she will be living with her new brothers. She is accompanied by her inexplicably talking squirrel named Juli who is the only one that seems to be fairly alarmed at their new living situation.

The first two that she meets outside of the house are Masaomi and Wataru. Masaomi is the oldest and is a pediatrician while Wataru is the youngest. Both are fairly harmless, so no worries here.

The two are fairly harmless, of course, especially Wataru. In the middle of unpacking, Juli is once again reminding Ema, who he calls Chii, to be careful and that he will watch after her, but only to realize she has disappeared. Upon searching for her, he encounters two other brothers, Subaru (the 9th son) and Kaname (the 3rd son). Another brother, Iori (the 10th son), joins the others in the elevator up to the apartment.

Here, Juli graciously provides us with some exposition on the boys. He is all knowing apparently.

Subaru and Iori are both students though Subaru is in college while Iori is still in high school. Both are apparently all-rounders in school with Subaru especially exceling a both sports, basketball specifically, and his studies. Kaname appears to work as a Buddhist monk despite his womanizing charms.

Once they arrive back at the apartment, Juli finds Ema greeting another set of brothers with one, Tsubaki (5th son), giving her a rather intimate welcome hug. He is promptly punched in the back of his head by his twin, Azusa (6th son). I’m sorry I couldn’t capture that moment but I ask you to watch the episode yourself for the glorious moment.

Then yet another brother, Ukyo (2nd son), enters with a serving cart. He appears to be the mom-bro-dad of the group. We learn that he is a lawyer.

Are you keeping up? This will be on the quiz later, so make sure to keep up!

Continuing on, the meeting is interrupted by a fiery red-haired boy, Yusuke (the 11th son), who instantly rejects the idea of Ema being his sister, mainly because she is his classmate from school.

At this point, Kaname comes back down all decked out in Buddhist gear and wastes no time in greeting Ema with a kiss on the hand. He is promptly swiped in the face by Juli who hit him earlier as well. Sadly another moment you have to watch the anime for because I didn’t capture it. I swear, it’s worth watching alone just to see Juli assault these boys.

They all chill on the couch afterwards to have a nice chat together where Ema learns a bit more about some of her other brothers who are absent at the moment. This includes Fuuto, stage name: Asakura, who is apparently a famous idol away on tour at the moment. He will be introduced as soon as the next episode so don’t worry.

Suddenly, Ema faints from a fever brought on by the exertion of moving and from all the excitement of meeting the brothers. She is brought to her room by Ukyo, Kaname and Masaomi who treats her since he’s the doctor of the family. A new face enters, Louis, who is a hair stylist and a rather slow talker. He appears to meet Ema and to check on her as well. So far, I have to say, he also seems rather harmless and might be one of my favorites.

As Ema starts to rest, we get a little of her backstory where it is revealed that she’s mostly been living alone this whole time and having a big bustling family now makes her feel happier than ever. I got to admit, that is a rather sweet sentiment and I can’t believe I’m saying this, but I do feel happy for her if that’s how she really feels. Still, how is she this calm?

Later, Kaname visits her with treats and doesn’t let her get away with calling him “Kaname-san.” It’s “onii-chan” now, ma’am. Afterwards, he gives her a kiss on the cheek as a good night, but Ema sees it as teasing her and stands up for herself.

And then this happens:

These brothers really waste no time, do they? It’s only the first night and already the romantic antics have started. Still, maybe it’s nothing? Perhaps it’s just him being overly friendly as a welcome to his new adorable sister, right? Right?

Then, this girl still has the guts to go out to use the bath, but of course, finds one of them, Subaru, wearing nothing but a towel which eventually flusters them both. Ema quickly retreats only to overhear Tsubaki confessing his love to Azusa…his brother, his twin. Taken aback and quite overwhelmed with emotions, Ema passionately gives her support of their “relationship” to the giddy amusement of Tsubaki especially who plays into it a little more before the twins including Subaru reveal that the twins are seiyuus (voice actors) just reading over a script. Oh, what a silly misunderstanding~

With that, the episode ends with a thoughtful Ema laying in bed basically wondering what kind of world has she stepping into?

Overall, it’s not a bad start. I was expecting worse from these harem anime since the ones I’ve seen glimpses of (*cough* Diabolik Lovers *cough*) tend to go down the deep end in ways that make no sense, are just plain stupid, or/and borderline emotionally and physically abusive. Of course, this is only the first episode, so I’m still holding my breath to see what the next 11 episodes bring for me. While I do feel a bit conflicted with the whole argument of “Is it okay to love your stepsister/brother?” I also really do feel for the poor souls who are indeed in love with their step sibling related not in blood but in bonds.

It is fairly clear that one brother, Yusuke, is in the midst of such complicated feelings if the post credit scene is any indication.

Well, I certainly will continue watching. I will probably be back for a review of the whole series after I finish watching the last episode so stay tuned for that. By then, hopefully I will have a bit more to say as I become more familiar with the characters and the unraveling story. However, for someone with such a poor memory, I wonder if I will even remember all of the brothers’ names even.

I got to say though, I believe Ema is way to chill about this whole situation. I appreciate that she isn’t a overexcited mess that thirsts over the fact that she will be living with 13 different boys (and remember, one is barely 10 it seems) since I have also seen quite a bit of that in other stories. It can turn me off to a heroine real quick. Still, she’s not totally stoic as we saw in a couple scenes with Kaname and Tsubaki especially. Ema is just a bit special in her own way. Let’s root for her to navigate this crazy new life she’s been dropped in.

By the way, since I do not believe I will be writing a post for each episode like I originally had planned, I do want to at least introduce the remaining brothers in this post. By the time I have finished typing this up, I have watched up to episode 5 and I have a better grasp on the brothers and story miraculously. The remaining brothers are as followed:

Fuuto is first because he pops up right in the next episode and we quickly realize that he is rather rude and snarky towards Ema. Of course, that perfect little idol image is just an image. He calls her stupid, leads her on when she changes her appearance but takes back his words, and makes her rent films he couldn’t because she blew his cover. He’s not that great of a person, but after an evening of watching a film together and Ema showing support for his dreams of acting and breaking the stigma of his idol image, his tune towards her changes a bit. We’ll see if it lasts.

I actually don’t know too much about Hikaru besides the fact that he cross-dresses a lot. According to the Wikipedia page for this show, he’s a novelist and the 4th son of the family, but because I tried not to read too much in case of spoilers, I don’t know much else. I do know that he seems in the rather harmless category with Waturu and Masaomi. He also seems to be more of an observer of his brothers’ activities and happenings with Ema as he pops up in the kitchen one day to tease Ukyo over subtlety being flustered over helping Ema make dinner.

The 7th son and one of the ones who doesn’t live with the rest of the family. He is actually the fraternal triplet of Azusa and Tsubaki (I know, crazy, right?). He works at a video game company who develops one of Ema’s favorite video game series so he kindly gives her pre-release copies of the game to play. Natsume is the last brother to be introduced at the wedding of Ema’s father and the boys’ mother. He appears to have a strained relationship with Subaru, particularly over Subaru’s basketball career, and once it’s clear that Subaru holds feelings for Ema, their relationship hits another rock in the road. To be honest, I don’t know if Natsume holds feelings towards Ema quite yet. His concern over the two may just be him being worried over Subaru and he may think Ema is distracting the basketball player (since an incident with Ema caused Subaru to lose a little focus over the sport), but I mean, I have to remember the anime I’m watching. I guess I’ll see as I watch on.