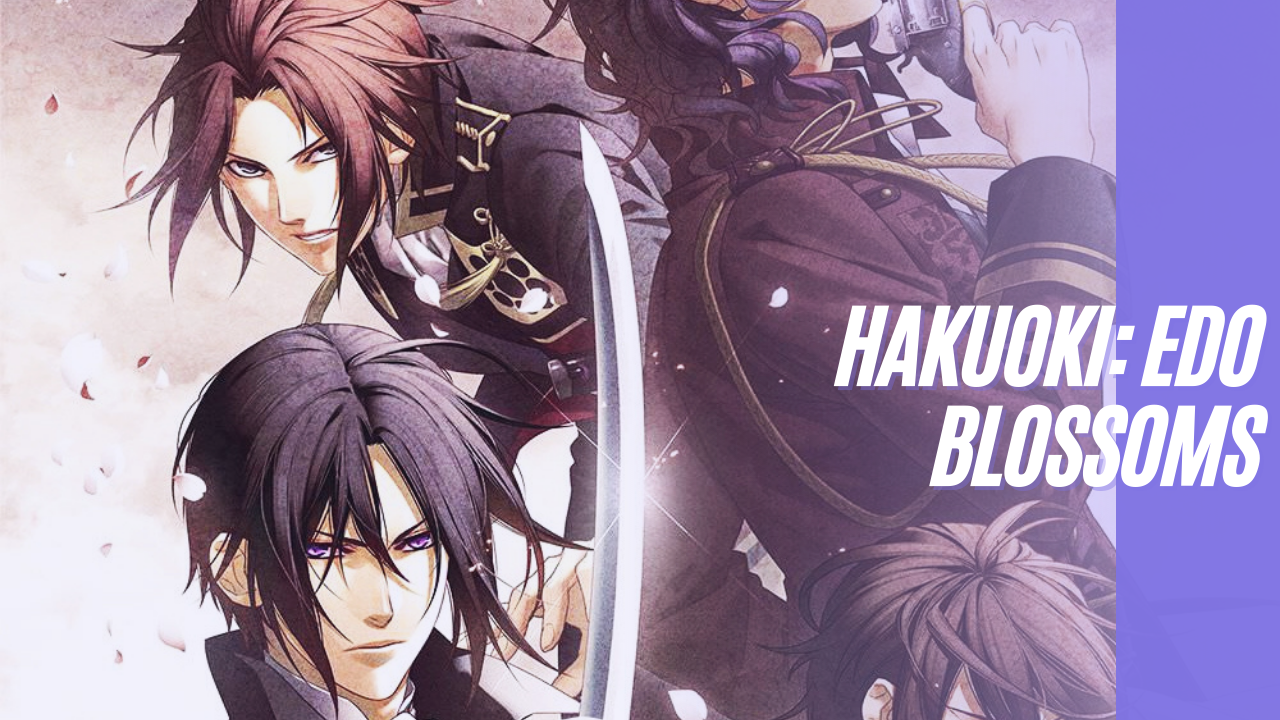 I’m finally back! I bet you thought I was joking when I said I would come back to review of Hakuoki: Edo Blossoms, but if I wasted part of my precious waking hours doing 12 whole routes again, I’m definitely going to write up my thoughts.

This “review” is for the sequel to Kyoto Winds, the first remastered Hakuoki game released on Steam. If you haven’t already, I would suggest playing that game yourself or peruse my own review to get a basic grasp of the series and the foundation for Edo Blossoms. Do you need to do either? Not necessarily.

Each route begins with a quick summary outlining the major points of what happened in Kyoto Winds, but I wouldn’t recommend just jumping right into the sequel. You do miss a lot. Kyoto Winds introduces you to the characters, the love interests most importantly, and the major story points that will follow you into Edo.

The story of Edo Blossoms starts in 1868 after the unfortunate war against the Toba-Fushimi where the Shinsengumi and shogunate forces were forced to retreat back to Edo after Kyoto ended up being a lost cause. Depending on whose route you choose once you boot up the game, our dear Chizuru may be right in the thick of it or on the peripheral watching what happens to her cherished Shinsengumi men.

Due to the fact that stories can greatly differ depending on characters, I won’t get into details. Just know that unlike the first game that spans across 4 years, Edo Blossoms only takes place for about a year. What does remain the same across the 12 routes is the failed attack on Kofu castle, Imperial Furies are now a thing to reckon with, the fall of the Shinsengumi that culminates in Ezo (modern day Hokkaido) where the remaining vestiges of the warrior group surrender to the Imperial army.

What Edo Blossoms proves at the end of pretty much every route; however, is the fact that the amount of bittersweet turmoil you will experience is enough to make you wonder why you let yourself suffer like this. Not one route is safe from the emotional labor you will have to muster to get that promised happy end with your man. Prepare yourself well, my friends.

There are new OSTs in Edo Blossoms that are just as good, if not, better than the soundtracks found in Kyoto Winds. I can’t really find a better playlist than this one since I don’t believe this is an extensive playlist for Edo Blossoms (but for Kyoto Winds, it’s perfect). I say this because a couple of pieces I really like aren’t on there. Shame. Doesn’t take away from the fact that the music is a great match for the game and the story it tells.

I did a more detailed character profile of Chizuru in my first review of Kyoto Winds, so I won’t repeat all of that again. But look at her – all spiffy in her new Western outfit. Sadly, she is only gifted this outfit in some routes, not all. Imagine my immense disappoint after getting it in Iba’s route, my first route, and realizing I was just lucky.

Side note: I do believe Chizuru does act according to the route so her character and personality is slightly different depending on who you’re with. For instance, she’ll play the strong snappy housewife in Kazama’s route, but be a crybaby in Hijikata’s route. I’m only half-joking here. Yet, I still love her anyway. Call me simple.

The antagonists are the same in this game as they were in the last game so I won’t make a whole big detailed section on them this time around. If you want more info, then please visit my first review on Hakuoki: Kyoto Winds.

For this section, I will just list the antagonist and tell you which routes they appear in. I will expand on their respective roles once we get to the 12 bachelors. If the name is bolded, it means they were a main antagonist in that route, not just a side character.

*Of course, in Kazama’s route, the other two appear in his route as allies.

NOTE: Some of the routes have not been finished yet. There will be real soon though so hang tight! This is indicated by the “Don’t Click” subtitles.

This section will be a bit different from my original post. After playing Edo Blossoms and seeing how long each route was, I felt writing a little blurb or two for each wouldn’t do them justice especially considering I have quite a lot to say about some routes.

I will list the routes in the order I did them so click on the picture of your 2D husbando to take you to their page. Some characters share a page since I didn’t have it in me to make 12 separate pages so please forgive me on that front.

As always, I didn’t consult any guides for suggested route order so please don’t use my order as a reference. With that said, since each route follows a more unique story since in Edo Blossoms, you choose from the start whose route to do, the overarching story will be the same, but with slight differences in favor of your love.

If you do Sakamoto or Kazama’s route, specifically the latter’s route, you will hear the Shinsengumi’s movements secondhand and won’t meet up with many, if any of the Shinsengumi. Iba’s route is also included in this, but to a lesser extent, so please be aware of that.

The New Guys – Coming to Steal Your Heart

The “I Love Being a Fury but it Hurts” Routes

All in all, I had a ton of fun with Hakuoki and spent many nights turned mornings speedrunning through routes. I know, not necessarily proud of that. Yet, I understand why the franchise is as extensive as it is and will definitely be diving more into it when I got the time. I mean, there’s manga, movies, anime, and even stage plays of Hakuoki to consume if you, like me, want more of these 12 handsome fellows.

My only complaint would be not having some of the side characters be routes. Come on, I can’t be the only one who kind of wanting to romance Shiranui especially after Harada’s route (I’m so sorry Harada, my man). Heck, give me Sen or/and Kimigiku, too. I’d love a female route and I’m straight as an arrow.

All in all, I’d urge you to pick up a copy of Hakuoki the remastered versions on Steam if you can. I can’t say anything about the original game nor can make any judgements for OG players on if this is worth getting if you’ve played the original. Yet, I can say if you haven’t delved into Hakuoki, then you’re missing some sweet sweet romance with a good amount of history (if that’s your thing).

Truly, a rollercoaster of an experience through hot versions of historical figures that I wouldn’t take back. Ever.