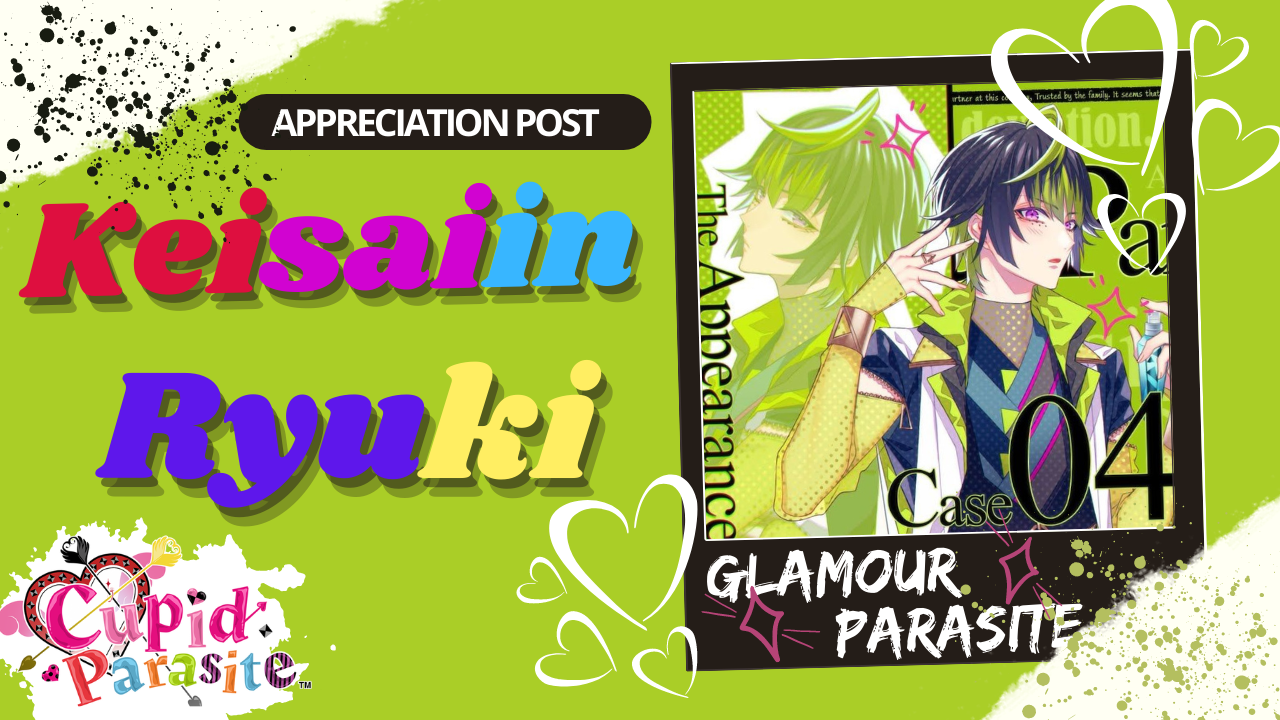 My second otome appreciation post is on the sharp-tongued Glamour Parasite, Ryuki F. Keiisain from Cupid Parasite. Yes, a bit of an odd choice to say the least especially after I had tweeted this after falling into his route:

I assume those reading this know all about Cupid Parasite, if not at least Ryuki, so I won’t waste time explaining who he is but here’s some basic info:

Now, onwards to showcasing how despite being a parasite, he was actually not that bad. Note: It’s probably obvious but there will be spoilers so proceed at your own risk.

Reasons This Parasite Really Grew On Me:

1. I’m now interested in learning about fashion and makeup

These are outfits I wish I could rock (and afford for that matter), but my chubby whale self could never. Both of these outfits are from a Pinterest folder of mine labelled “Fashion Ideas.” I haven’t added anything new for like 14 weeks though. Shame.

Still, despite being acerbic about people’s sense of fashion and lack of care for themselves, Ryuki did make some points that made me stop and think about how much I wanted to improve my own style.

I’ve also never been one for makeup, but I did want to try a couple years ago. Then the pandemic happened and I sort of forget about it until recently. Thanks to Cupid Parasite, I really want to try it again.

For those that didn’t play the game and are reading this for some reason, you may not know what synesthesia is. To put it simply, synesthesia is when you experience when sense through another. Sounds a bit confusing but here’s some examples:

Ryuki has a form on synesthesia that allows him to see the colors of people. Lynette’s color for instance is #da536e which is a red-pinkish color resembling a camellia. Most people appear as terribly ugly colors to Ryuki though. It’s so bad that he actually blocks out the more “unsightly” folk so he actually can’t see them or notice their presence. It’s a concerning yet fascinating condition in Ryuki’s regard.

I also learned just now that another form of synesthesia is called misophonia which I have suspected I may have for months now so yay for having the less pleasing side of synesthesia.

3. To be honest, his acerbic tone and comments were appreciated

The examples above are nothing compared to some of the things he says to people throughout the game (looking at you Melanie). Yet, even as a crybaby I appreciated his scathing comments and opinions because 1. Honesty and 2. It was kind of funny ngl.

I know in real life, I’d lowkey hate him for it since I’m sensitive as hell. However, I never got the sense Ryuki was being malicious in his bluntness. It was more like he was being honest, if not brutally honest. Sometimes it’s refreshing seeing someone so honest even if it does come across as just rude.

Ryuki’s voice actor or seiyuu is Junya Enoki. I believe in the anime world he is most noted for voicing Yuji Itadori from Jujutsu Kaisen and Pannacotta Fugo from Jojo’s Bizarre Adventure.

I’m familiar with both characters as a Jujutsu and a Jojo fan (high recommend for both series). I also really like both characters, too. But that also means I will never see these two the same way and I’m not sure how to feel about that…

That aside, Enoki’s voice is really growing on me and even though I haven’t heard him in a lot of roles, I gotta have him up there as a seiyuu I look forward to seeing hearing in the future.

5. He is surprisingly cute (and shy)

Under that condescending acerbic exterior is actually a rather shy and awkward boy. As the youngest love interest in the game, Ryuki doesn’t really act his age and even appears more mature than some of the others. So it is a bit of a surprising turnaround of personality when his feelings for Lynette blossom.

When he realizes he is in love with her, his initial reaction is confusion and fear (more on why will be explained later). Even when he comes to terms with his love for Lynette, he still acts rather hesitant since the feelings aren’t reciprocated yet.

On the other hand, Ryuki has a bit of a possessive streak as he really doesn’t want to share Lynette once he is sure of his love for her. I was surprised to say the least but in a way that side of him was kind of cute too as long as he didn’t push it (which he didn’t thankfully).

6. His backstory explains pretty well why he is the way he is

I appreciated learning about Ryuki’s backstory here and there as I played through the route. I can’t explain his whole backstory, of course, but I will give some highlights.

As his name suggests, Ryuki is the only Japanese Parasite of the group and even then he isn’t fully Japanese. His mother is a Japanese violinist who travels the world while his father is American model.

As a “hafu” Ryuki, who was born and raised in Japan, faced some ostracization from his society and his peers at school. Hafu in Japanese refers to someone who is only half-Japanese. If you didn’t know, hafu in Japan are discriminated against to a visible degree and sometimes feel like foreigners in their own country so Ryuki’s struggle of fitting in feels real.

It doesn;t help that he also came from a prominent designer family who had been famous for decades. People who heard that he was a Keisaiin held preconceived notions of him that was very pressuring and bothersome.

Even within his own family, he was a bit of an outcast as most of his family disapproved of his mother’s decision to not only marry an American man and NOT a prominent member of Japanese family, but she also didn’t take over the KeiSai:In! brand like she was supposed to. As a result, she was disowned by most of the family except by her mother, Ryuki’s grandmother.

It is the grandmother that Ryuki really wants to impress and seek approval from. He aims to take over the KeiSai:In! brand as well as incorporate his own brand, rYUKI. Yet, his grandmother, who take him in at a young age to train him to be a top fashion designer, doesn’t speak to him. It seemed like no matter what he presented to his grandmother, nothing got her approval. Not to mention thanks to jealous relatives, Ryuki, who had a passionate interest in designing women’s clothes turned to designing only for men as it was more appropriate.

Honestly, that’s only the surface of seem of his issues. Basically, there is real depth here that I was pretty impressed to relate to to a degree. It also helped me understand Ryuki a lot more. My initial trepidation and dread towards his character gradually faded. He really grew on me as a character and person.

7. CGs were on point

Since the last section was way longer than it should have been. I will keep this one short by saying that I just really liked the CGs in his route. That’s all I can say.

(Bonus: He proposed in the snow. Snow is one of my weaknesses.)

And that’s it for this time. This was longer than my other appreciation post for Enomoto but hopefully it was just as entertaining. Ryuki is my first ~possible~ husbando who is on the more younger side. Usually I don’t do younger guys but Ryuki can be an exception.

Looking forward to who can capture my heart next. Stay tuned~