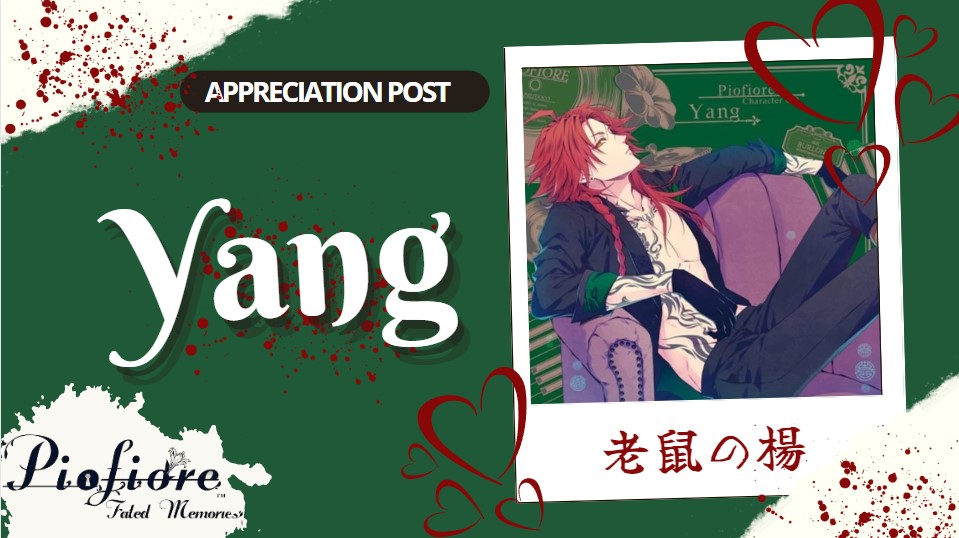 Yeah, those that know me will see this as surprising. If you take a look at my other appreciation posts, all the guys are on the more, uh, soft side. Not only that, two of them, Ryuki and Orlock, are on the younger side (which is a surprise to me, too) and both are pure in their own ways.

That’s why the title is slightly different. This man is trash. He sucks. He’s a jerk and a bastardo who horribly goaded and tried to drag my boy Orlock to his level. He also kills best boy in one of the routes in Piofiore and kind of desecrates his body by repeatedly stabbing him even after he dies.

That wasn’t funny. What’s funny is how weird my brain works, but here we are. Yang is the first morally bankrupt love interest I have a thing for. But why? Well, that’s what this post is for. But to be honest, I ask myself that question every day…

As always, first his profile and then let’s move on to the actual heart of the post (spoilers as always especially CGs!).

Of course, I have to owe it to the seiyuu of Yang, Okamoto Nobuhiko. I mentioned this in my Orlock post, but I believe the seiyuu really brings to life a character in their own unique way and Yang is no different.

Actually, learning that Okamoto voices Yang really had me wondering the process a seiyuu goes through trying to come up with a specific tone and voice for a character because so far Yang is quite different from other Okamoto characters I’ve heard.

And even those two are drastically different. Bakugo is…angry while Rin is just cute. Okay, there’s more to them than that. For instance, Rin is the son of Satan himself. Yes, Lucifer, the Devil, the Lord of Darkness, whatever you want to call him.

And yet, Yang acts more devilish than adorable Rin up there. Even Bakugo, who lowkey seems like a villain to me sometimes (just the feeling he gives), pales in comparison to Yang. All three…don’t really sound alike, but I still heard Bakugo in Yang – guess my ears are built different, I don’t know.

So the first route I ended up on was Nicola’s route. He was a great guy who is very sweet to Lili even if part of it was an act in the beginning. I also think he looks the most “aesthetically” pleasing with Lili. As in, because they look similar, they look like a picture perfect couple and CGs with them were lovely to look at.

But Nicola is meh for me. He actually kind of annoyed me in Dante’s route. I know I know. I know why he was doing what he did in Dante’s route, but it still rubbed me the wrong way for some reason.

This reminds me of a Twitter thread I saw a while back about why people like Yang. One comment mentioned how unlike the other guys who “butter up Lili,” during their respective routes, Yang is more blunt, straightforward, and honest which is a take.

No, I mean, I agree to an extent. Call me biased, but while I do agree that the Falzone men are like that with Nicola even calling himself out for it (so give him that), the others are a bit different. Gilbert is Gilbert. He stays consistent for the most part. Orlock is the same.

Yang is also the same, if not more vexing in other routes. Yet, I will say I appreciated his upfrontness more than the others specifically the Falzone boys.

3. Yeah, Lili Would Not Survive His Route

I’d like to think canonically Lili would not last in Yang’s route. The CG above is when Yang surprises Dante by throwing Lili at him at one last ditch effort to kill the young Falzone capo. And he succeeds obviously.

Using the girl he was oh-so-romantically leading on as a sacrifice to not only take down an enemy but to successfully get away after his whole Family was obliterated. Woah.

In all seriousness though, I’m not saying it’s on Lili for not being able to keep up with Yang and entertain him at the same time. No, this is on Yang. I just find it more harder to believe that Yang would grow a heart bigger than the Grinch’s on Christmas to accommodate a woman like Lili given his lifestyle and tastes.

Granted, I know the female lead is supposed to be different depending on the route but the canonical personality I have in my mind for Lili is at best a lady who’s going to get Yang’s Tragic Ending. Maybe Good Ending but Best? Probably not.

But Lili and Yang not ending up together gives us some great tragic CGs.

While it does feel like he sucks 99% of the time, Yang does have his moments where he is a bit on the nicer sider. Granted, this doesn’t mean he is nice for the sake of being nice – it just means his actions and words can be perceived as being kind to others.

Also, Yang being Yang – he gets bored easily. So, he does things to entertain himself. Yes, it’s not just blood slaughter and cleaning up trash in Veleno, he does more innocuous things as well.

Namely in the lead up to the Tragic Love Ending, he plays a Romeo to Lili’s Juliet as the latter gets captured by the Falzone’s. Sweet Yang ends up visiting Lili a couple nights in the dark of night apparently just to see her and stake out the place despite being in enemy territory.

Despite it being a farce, I’m not going to lie, I did enjoy Yang being the romantic type. Also, I have to give him credit where it’s due. Even if he was doing it to stave off boredom, he doesn’t half-ass it despite the effort he had to exert to keep up the act (even reading

Not only that, but see how kind he is to give Lili a little history lesson in Gilbert’s route. Truly, a man of compassion.

5. Helped Me Rediscover My Love for Sfogliatelle

Years back, there was a time my parents went to these restaurant depot store and bought these box of frozen Italian pastries. I remember liking them a lot at the time but their were kinda hard to eat. They were a tough chew but lovely to eat. I couldn’t remember what they were called…until I played Yang’s route.

The twins, Lan and Fei, who act as Lili’s bodyguards while she stayed was imprisoned by Yang really enjoyed Lili’s dolce particularly sfogliatelle. All that talk about the Italian pastry sparked long buried memories of the treat and made me actually look up if there was an Italian bakery in my area.

Thankfully, there was and I was able to have some sweet sweet sfogliatella again while almost breaking my teeth in the process (okay, I exaggerate, but still…).

6. Yang’s Explanation of the Holy Relic of Burlone is a Jojo Reference

Before I became a fan of Jojo’s Bizarre Adventure, I had heard the fandom makes everything a Jojo reference even the most far removed things from Jojo. But after becoming a fan, I totally understand! Hell, ever since I started playing otome games, there have been a number of surprising “Jojo references” I’ve discovered.

Okay, it’s more like certain things and people remind me of Jojo. For instance, at the end of Dante’s route, Yang finally explains what the holy relic of Burlone is and as he explained all I could think of was this: “Oh my God, this is the plot to Part 7 of Jojo…”

Even before Yang revealed the true identity of the relic, I made a joke about relic, a guess that turned out to be right. I was deceased.

I’m not going to reveal what the relic is but if you’ve read Part 7 of Jojo’s Bizarre Adventure, if you know, you know.

7. Yang is my Villain Awakening

It can be said that Yang is definitely a villain. My first impressions of him were based on his actions and words in Nicola’s route. And as you may know, Yang is one of the ones that causes Nicola a whole load of trouble in the latter half of his route. Not great.

Yet, I ended up not liking Nicola like that anyway so it’s all good lol.

Okay, but seriously, I find myself enjoying Yang’s antagonistic ways and had to wonder what it was like to just cast aside being the nice guy for once and being a complete selfish jerk to those around me. Must be a nice feeling. Everything you do or say is for self-satisfaction and for your own pleasure.

Why would that not be appealing? I guess using others as stepping stones may not be as nice or cruelly toying with maiden’s hearts is upsetting to some, but it’s tempting to play the villain for once in my dingy life.

I guess watching Yang is a bit cathartic. Plus, seeing him covered in the blood of a drug addict is also kind of hot, I guess. Oh, and his tattoos~

Wow, and that’s it, folks. I still question myself on what kind of man I have grown to like. If you don’t like him, I really can’t blame you. I have seen enough memes and discussion threads of how Yang is one of the “finest of trash man” out there.

And I appreciate every single one cause where is the lie. Looking forward to Episodio 1926 to see what more insane fun Yang will provide us.