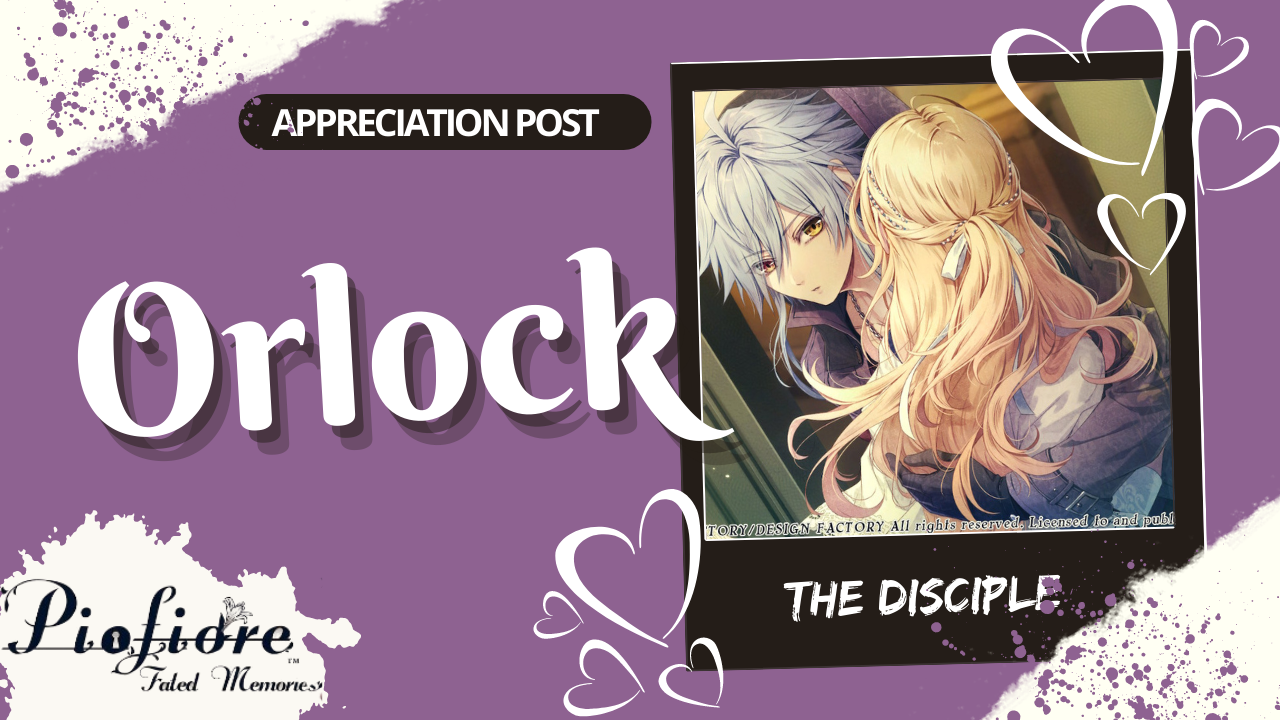 Finally, my third otome appreciation post and this will be about the character Orlok from Piofiore. My boy doesn’t seem to get a lot of appreciation unlike the other love interests especially Yang (despite being…Yang) or the Falzone men. Thus, I wanted to write a little posts on the best boy of Piofiore.

Here’s a bit more on Orlok for those who aren’t as familiar with this quiet killer (of hearts~):

Reasons I Love This Boy:

We have to start with the voice actor! The past couple of appreciation posts I’ve done have included the seiyuu but not as number one which is a faux pas on my part. A voice actor really brings a lot to the character and so it’s really important to highlight the seiyuu, too!

I’m not familiar with Toyonaga yet, but looking through his filmography, I’ve encountered him before here and there but it’s truly with Orlok that’s caused me to really notice him.

Side note, I recently started Dairoku: Agents of Sakuratani, another otome game and he voices Semi, the “main” love interest it seems in that game. Very different character and personality than Orlok though. I haven’t even cleared the common route yet, so I can’t say much. Oh, and Toyonaga also sings the opening song for that game, too.

Which means, Orlok can sing~

2. His Appearance (Heterochromia is Hot)

Okay, I have a slight weakness towards those with heterochromia. I guess because it’s different and usually it’s either hot or cute on a character. Orlok is one of them. I know, he is the baby of the love interests, too, and usually I do like my husbando characters a lot, but just like Ryuki I can make an exception for Orlok, too.

3. He is a Precious Bean that Protecs, but Needs to be Protecced, too

This is just how Orlok is. In a game like Piofiore, his personality is a bit refreshing since the other love interests are 3 mafia bosses and 1 underboss. Since Orlok is the outsider of the group, he definitely can feel a bit relieving or boring depending on how you look at it.

Considering he is a bonafide church boy, he might not vibe with some people, but it contrasts with his role as a informant and assassin (no joke, this kid is a master at fighting).

Still, despite worshipping Lili a bit too much in the beginning as “The Chosen One,” he mellows out a bit especially when he realizes that his whole life in the Church was built on lies…

4. His Back Story SUCKS, and Pulls at the Heart Strings

I’m not a complete sucker when it comes to sad back stories. (Okay, I lie. I’m too compassionate). But, I mean, you play enough otome games and you realize all these men have some sort of emotional baggage or trauma that the female lead usually miraculously heals in some way, shape, or form. That’s not a bad thing at all.

Yet, sometimes you come across back stories in games that really hit you hard. For me, Orlok’s story did that and it’s terrible how bad in can devolve by the end of his route.

I won’t go into details, so I don’t spoil too much. I will say that this poor boy was basically groomed by “His Excellency,” a Bishop Rosberg, to be a weapon to use to do his dirty work. Orlok is honestly too pure and blind to see how messed up his situation is (For God’s sake, the boy doesn’t even have a proper home and sleeps on the floor of this ramshackle of a place with raggedy blankets – what?).

Not to mention that due to a mix of misunderstandings, raging vengeance, and terrible mistakes, all the other love interests in the game really really want Orlok and Lili dead especially Dante (oh God, Dante…).

5. His CGs are Honestly the Purest and Cutest in the Game

What else can I say here besides just look! Look at him.

6. His Route is the First in My Otome History to Make Me Cry

And the epilogue to Orlok’s Tragic Ending actually made me cry. I’m a very sensitive person but surprisingly, I don’t cry easily playing sad events in games like this. I’m a bit embarrassed to admit it though.

I’m not saying anything else about Orlok’s Tragic Ending except that I hate Dante.

That will be all for Orlok’s appreciation post. A bit shorter but that’s how I wanted it to be. I hope this brings even an ounce more of appreciation for this cutie on the internet. I say this despite the fact that I plan to do an appreciation post for one of the more popular husbandos in Piofiore. Shame on me.

But please show Orlok some love too! He deserves it (arguably more than some of the other love interests, but that’s just my personal opinion).