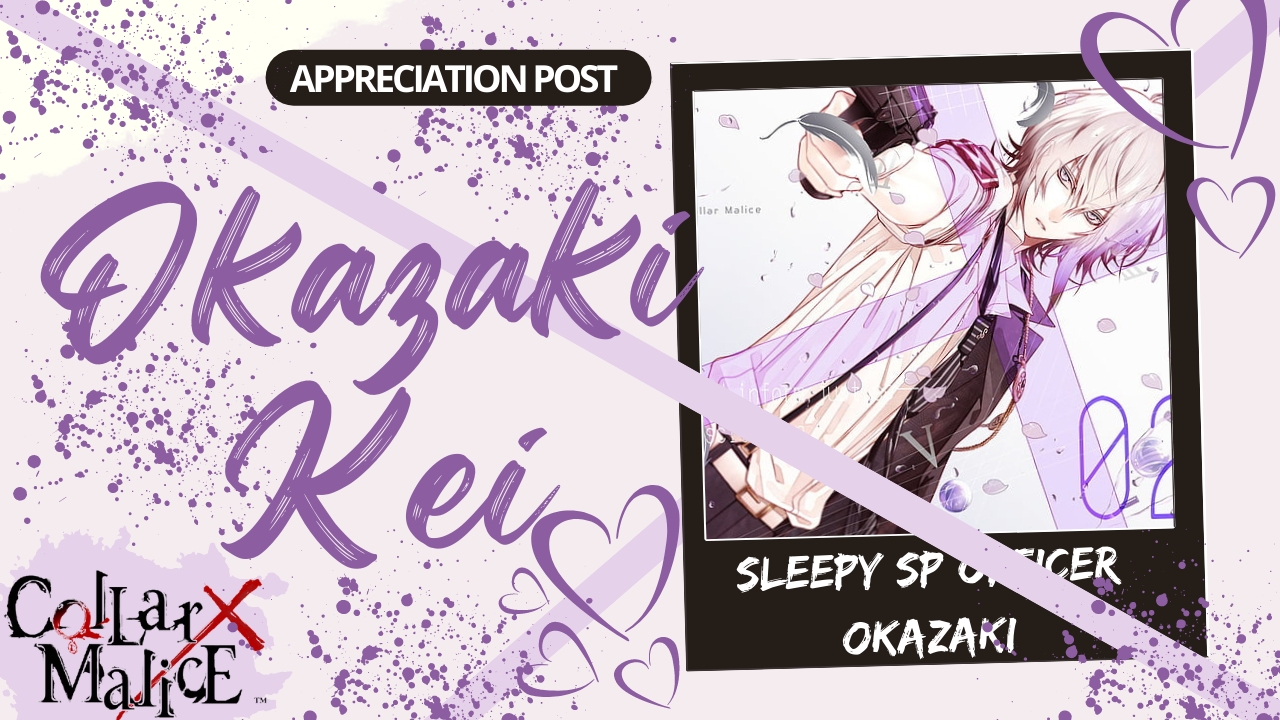 I’m finally back with another appreciation post! This is my second Collar x Malice appreciation post focusing on Okazaki and will be part of a series since I plan to write up one for all the boys.

Some basic info on Okazaki:

I actually just finished playing through Collar x Malice on stream the other day, and already wrote up a “review” post on it. So what I say may be redundant but please bare with me! I’ll try to add something new.

Reasons why I love this man:

Like I’ve said before, the seiyuu (voice actor/actress) makes the character who they are. Never underestimate how a seiyuu can influence how we like and perceive a character. Mr. Kaji Yuki is freaking everywhere in Japanese media and for good reason. This man has such ridiculous range, it’s jaw-dropping. Think I’m kidding? Watch the video below.

Okazaki has a soft and gentle feel to his voice that makes him sound a bit like he’s in his own little world at times. It’s cute and I love listening to him talk every time he’s on screen.

He’s also the only one to jump at calling Ichika by her first name instead of Hoshino and for some reason it makes my heart flutter a little each time.

I’ve said again and again that sleepy bois are best bois. I don’t know what it is about them that I like so much, but I do. Guess sleepy voices and expressions are just something I find cute. Don’t judge me too hard…okay, judge me all you want.

3. His Bizarre Interests in Food is…Concerning, but Interesting

This combo is the most normal mix of snacks you’ll find in those two eating in this game.

But not much else to say here. Okazaki just loves eating weird stuff and I honestly find myself being curious about how some of it tastes. I’ll pass on horsemeat ice cream though. Strawberry potato chips on the other hand sounds like it would be a delight to try at least. And yes, those are all foods they mentioned in the game.

4. He is Sadly Sadly Very Relatable…

When Okazaki opens up to Ichika about the past events that led to his lack of will to live, it really hit me. As someone who wonders why I’m still here on this earth when others who had so much more promise than me have prematurely left, I relate to Okazaki a lot. I’m in a better state of mind than I usually am as I type this but it’s still an uphill battle that will probably last a lifetime.

I’m glad he was able to find some peace in his route and even in others, specifically in Yanagi’s. As someone who can empathize on how he feels, I wouldn’t want any to feel the way I do.

5. He is a Ghost and I Love How He Just Pops Up Out of Nowhere

I mean, enough said. Okazaki just pops into the scene when nobody asked. Most of the time there is literally no warning and suddenly he’s there trying to tag along with the others or wondering what’s up. Heck, he even catches Zero, the leader of Adonis, off guard at one point.

6. Okazaki Just Wants to be Friends with Everyone

Okay, this is just lowkey saying he is overly persistent in his pursuit to befriend Yangai and co. which includes Ichika. The others are less than thrilled in offering even a sliver of friendship though. Poor Okazaki. The poor dude is just stuck outside the office day in and day out with only Yoshinari for company most of the time. Can’t he have some love, too?

I really do think Okazaki’s attempts at friendship are genuine. Although, I do worry it is mostly to fulfill his wish. Regardless, depending on whose route you’re on, Okazaki faces varying degrees of sucess.

7. Apparently, I’m Just that Compatible with Him

I played Collar x Malice blind all the way through (with exception of the very last of Yanagi’s route cause I was a bit lost). I didn’t know anything about the games mechanics or how raising love worked. Not to mention, I suck at choosing choices in otome games cause I ALWAYS second guess myself.

So color me surprise when I went back to look at Okazaki’s trust and affection meters and saw they were full. He was the only one I managed to maxed out on both meters. Yanagi was close with full trust but I sadly didn’t get full affection (so what does that say?).

But I was just thrilled I got through Okazaki’s route cleanly (well, I died to that bunny girl, Hana).

8. How He Texts is Just too Cute

Honestly can’t believe I nearly forgot about this one. The way Okazaki texts is just really adorable and funny to me. Like Ichika, I was surprised at first that he used little emoticons when he texted but I’m not complaining. Just look at that text exchange above and say that isn’t cute. I guess some people may find it a bit cringe unfortunately.

For me though, I just find it endearing and it had me loving him more.

Well, that is it! Hope this was able to convince you that Okazaki is at least not half bad as a love interest. Right? Right??

Anyways, please love this sleepy boi, but if not that’s okay. There are still plenty of Collar x Malice husbandos to go around. To me, they’re all top quality in their own ways.