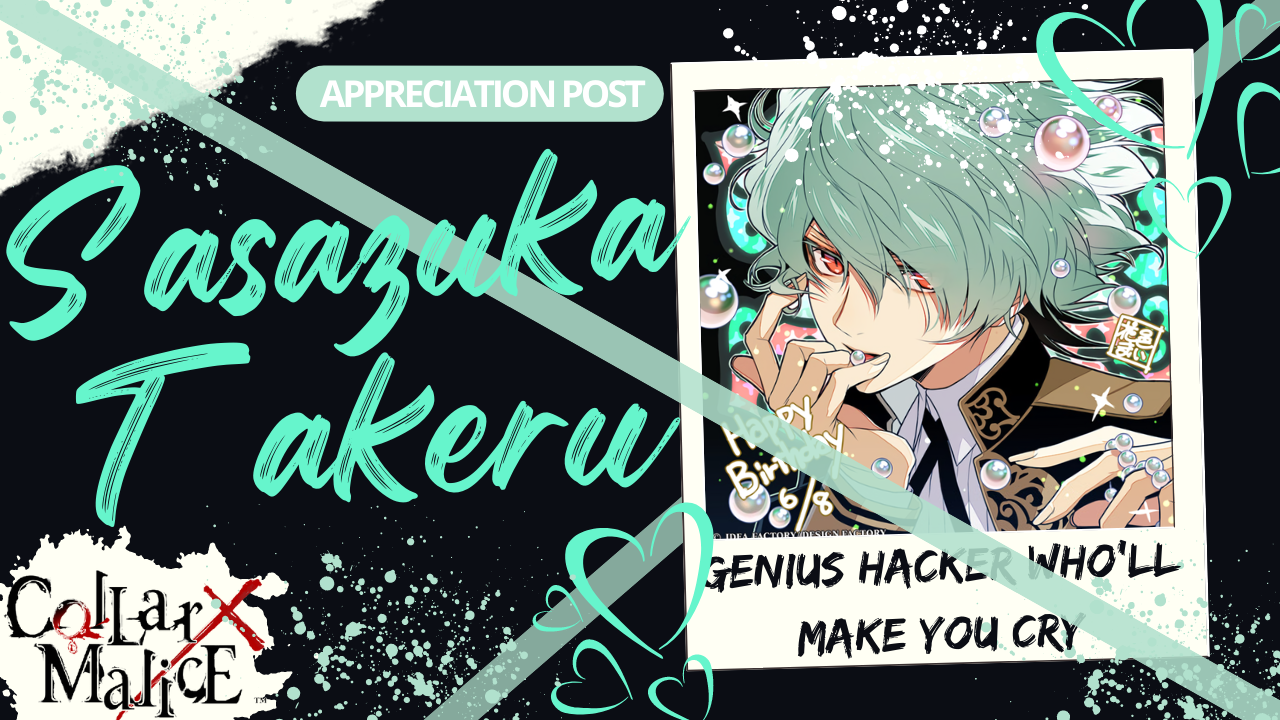 This is the third post in my Collar x Malice appreciation series for the lovely husbandos of the game. Of course, this one is about our acerbic donut-loving tsundere, Sasazuka. I know, I’m surprised myself that a sensitive softie like me would love a guy like him. But then I like a literal walking and talking red flag like Yang from Piofiore, so Sasazuka is really nothing in comparison.

If you want to check out my other Collar x Malice appreciation posts, just click the name you want.

Some basic info on Sasazuka:

Reasons this tsun isn’t so bad:

Again, we gotta start with the voice. I still can’t believe he is voiced by Namikawa Daisuke. Why? For me, the very first role I ever head him in was in Hetalia where he voices Italy.

He sounds way too cute, adorable and, dare I say, wimpy but to tell me that my dear Italy has the same voice as Sasazuka who has a biting tongue and insults for days? Unbelievable. Although, in the same anime, Namikawa also voices Romano, aka Italy’s brother, who is a bit more boorish and more in line with Sasazuka in personality. Still, the range of a seiyuu is once again just incredible.

I can’t lie, while Sasazuka is smol, I find him somewhat adorable especially when we see his donut-eating sprite. I’m sure he’d kill me for calling him cute/adorable, but he is. I guess I may be influenced because I’ve seen a lot of chibis of Sasazuka. Also, I just really love the mint green theme he has going on. It’s a very pretty color even if Enomoto mocks Sasazuka for having seaweed hair.

3. His Insults are Just the Best

Okay, I’m not a meanie myself, but I revel in some of Sasazuka’s insults especially when it comes to his bickering with Enomoto (I’m so sorry, Mineo! I still love you, too!). I also wish I had that amount of confidence and nonchalant (read: I don’t give a shit) attitude he has because I would be a better person for it.

He also never really lets that part of his personality go towards Ichika even when they get together (though of course, he’s softer) which is good.

4. The Fanart for this Man…Y’all be Wildin’

I have seen a lot of Sasazuka fanart drop onto my Twitter timeline especially from the artist above. And boy, oh boy, the love you have for this man is really outmatched. I love you all for it and for spicing up my timeline. I tend to like the softer art, but seeing the more mature art is alright, too.

Still, I am a bit more of a chibi fan I would say. Is it cause Sasazuka is more smol (lol)?

Of course, Ichika has to prove to him that she could actually even deign to work with him before that, but he does get better. When Ichika was beside herself with worry over her little brother, Kazuki’s, connection with Adonis, Sasazuka did his best to comfort her. He even held her in an embrace to help her feel better.

Once the two also suspected Akito of being linked to Adonis, Sasazuka invited himself to Ichika’s place to help her talk to Akito so she didn’t have to do it alone. On a side note, it was so funny to see the interactions between Sasazuka and Kazuki considering it was a clash of similar personalities. Dinner was interesting that night.

But more importantly, right after that dinner confrontation with Akito, Ichika was feeling quite down and out again and even started crying in front of Sasazuka. So what does he do? He kisses her…yes, he just straight up kisses her to my everlasting surprise. Mind you, this kiss came out of nowhere and was perhaps the earliest kiss I had seen in a route. And from all people, it was from Sasazuka. Wow.

6. His Gun Trauma and How He Handles It

Sasazuka hates guns. If you were hoping to see him have a gun-holding sprite like some of the others then I’m sorry to be the bearer of bad news. To explain, Sasazuka spent a number of years in America with his mother. One day, they went out shopping and while out, an man began shooting at innocent bystanders, Sasazuka’s mom included. She died in Sasazuka’s arms.

Due to that, Sasazuka ended up moving back to Japan and entering the police force as a hacker before he left due to personal differences. His goal to reinstate the swords and guns appeal law is his driving force in solving the X-Day cases as he strongly detests the fact that ordinary citizens can walk around carrying guns.

I actually ended up failing the Trigger mode (gun shooting mini game) in Sasazuka’s route and ended up seeing a dying Ichika being held by an uncharacteristically distraught Sasazuka. I’m not going to lie, in that moment I found it interesting to see Sasazuka like that because it was so different from his usual demeanor. This was before he had opened up about his mother and his past experience with guns. I felt so bad for feeling that way especially after I found out.

Regardless, even if you succeed in the Trigger Mode, Sasazuka shows some signs of PTSD or mental trauma as he clings onto Ichika grateful that she didn’t die on him and that he didn’t lose her “again.” It’s pretty heartbreaking seeing him that way. If Ichika had indeed died right in front of him, I’d be highly concerned what would become of Sasazuka.

It’s also possible that he’d join Adonis (which does happen in one of the bad endings).

I wanted to end on a higher note since the last point was pretty sad. I just think this man would be pretty fun to have around as a boyfriend. He’d definitely keep me on my toes with his endearing insults and possibly give me diabetes with the amount of donuts and other sweets we’d eat. Yet, that doesn’t sound half bad at all.

And that is it for our lovely tsundere. I really appreciated his character in the game and it was pretty refreshing being insulted for once (did I mention I may be a bit of a masochist?). Give this mint-haired brusque tsuntsun a try because he definitely has a more caring and adorable side that’s worth all the trouble.