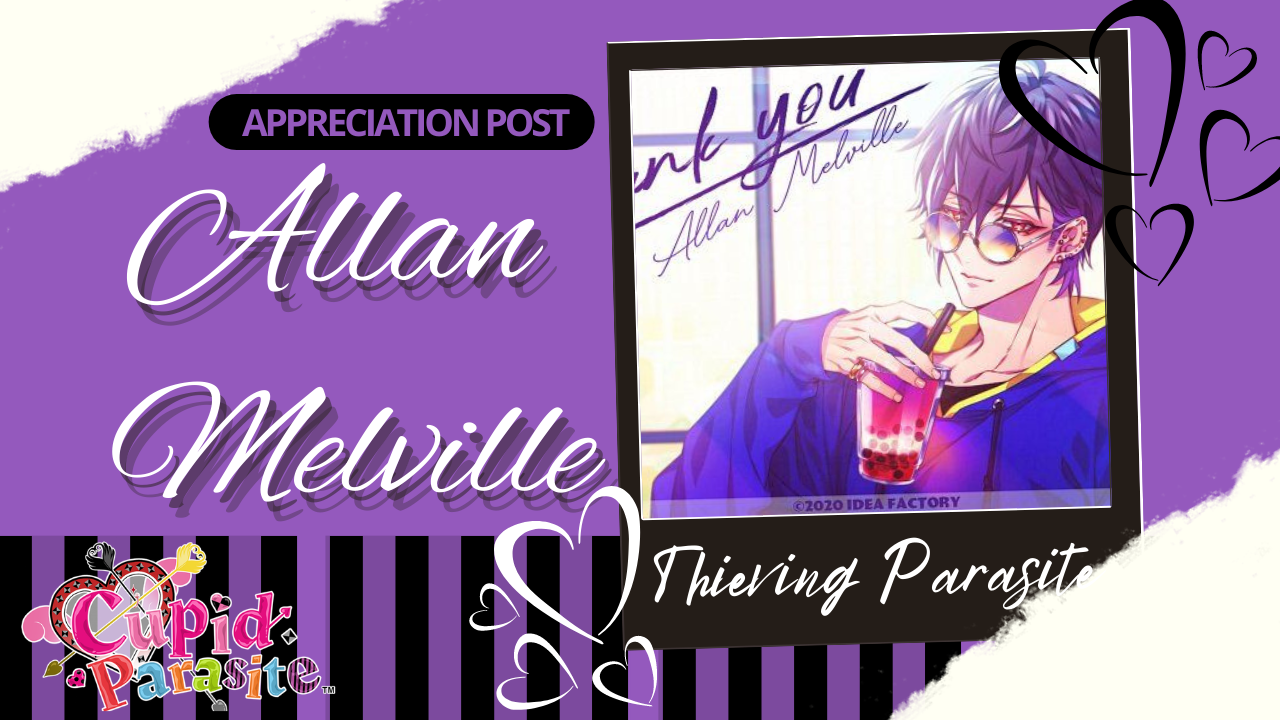 I’m finally back with another Cupid Parasite Appreciation Post featuring our beloved pillow salesman, Allan Melville. I have also written up a couple other CupiPara appreciation posts if you want to take a peek at that.

If you don’t want to read them, then onwards!

Note: This post will, of course, contain spoilers so be warned.

Why I think this man deserves the world:

To be honest, I’m not too familiar with Makoto Furukawa’s work outside of one particular anime that everyone and their mama knows: One Punch Man.

I honestly couldn’t believe Saitama could have such a suave (read: sexy) voice but here we are. Again, the range a seiyuu can have is no joke. It truly makes my head spin. Granted, it has been years since I watched One Punch Man (which is a high recommend, by the way), so I could have just forgotten how handsome of a voice Saitama had, but I digress.

As Allan, he does a wonderful job and definitely affects your senses as you play. So have fun, ladies and gents and other folks.

The way Allan is presented in the common route of the game is like a 180 of what he’s like in his own route. I was a bit surprised but also not too shocked since I knew we would learn more about why he is the way he is one on his route.

Still, it was painfully obvious he had his secrets especially after you go on his date during the common route. He asks Lynette at one point if they had met before and while Lynette takes it as that old classic pick-up line, the way he sounded sincere for once made me pause.

Even when he tries to scare Lynette to be more wary of a demon like him, he is stifling some kind of pain and sadness that we only understand as we complete his route. And boy, is his story something.

3. His Backstory with Lynette is truly a Tear-Jerker

This is about to become heavy spoiler territory so if you hadn’t clicked off by now, then you should if you really don’t want to be spoiled. Though I guess I don’t have to write that if you’re still reading up to this point.

Anyways, while playing Allan’s route that his true identity is that of a fallen angel. Centuries before the main events of the game, Allan was an angel in Heaven along with Lynette. They were literally each other’s other half and spent their days wordlessly enjoying each other’s company in what could really be described as pure happiness. Wordlessly, I say, because apparently angels don’t or can’t talk. Still, that didn’t dampen their time together.

Then, one day that happiness shattered when the doors to heaven opened and the gods, Jupiter and Mercury came to take away a couple angels. You see, lesser gods like Cupid and Nix are replaceable. It’s quite the reveal. We learn that our Lynette is the 78th Cupid in existence and was originally picked to be Nyx, but due to the high turnover of Nyxs, Jupiter convinced Mercury to pick Lynette as the new Cupid.

When the time came to take her, however, Allan put up some resistance. Of course, he didn’t want Lynette to be taken from him. Alas, Mercury saw it as an act against the gods and tore one of Allan’s wings before casting him from heaven. Harsh, I know and I don’t forgive Mercury for that at all.

Unfortunately, as soon as Lynette left heaven, she forgot all about her memories of the place and Allan and graciously accepted her role as Cupid believing that that’s all she knew.

But Allan didn’t forget and despite becoming an incubus casted down to the Underworld, he spent centuries trying to find a way to save Lynette from disappearing as Cupid and find a way to go up to her in Celestia.

Until, she came down to the human world and became a bridal advisor. Thus, Allan Melville, the Thieving Parasite was born. Let me clarify, he became the Thieving Parasite because of Lynette because he knew that if she fall in love with a human, she’d become human herself and be saved. Which explains all the times he would push Lynette to try to date one of the others.

Anyways, this section is too long so moving on! If you want more details, play the game (I beg you).

I wanted to go for a more light-hearted point as the last one was a bit heavy. As a bubble tea connoisseur myself, I like guys who indulge in some sweet sweet bubble tea. Or sour actually. Poor Allan can’t taste human food like the rest of us since as an incubus he only needs the dreams of humans to survive.

It’s pretty unfortunate but provides some puzzling and funny moments as you realize quickly that Allan believes bubble tea is sour because humans make a funny pinched face as they slurp up the bubble tea. I mean, he’s not entirely wrong. Sometimes, you do kinda have to pucker up your face like your tasting a sour lemon to get to those tapioca pearls.

And what’s more funny is that even though Lynette figures this out, she still doesn’t correct him by the end of his route. Personally, I don’t mind as I find it just cute.

5. I’m Not Going to Lie, I’d Like to Experience His Dreams Just Once

Let’s be real, this is how we all feel towards otome games. Don’t lie to yourself.

Anyway, I have no idea who would pop up in my dreams as my “ideal” as I still don’t know my type, but the way the game describes the dreams sounds like an experience I’d love to have once in my life. Only if it’s Allan. I don’t think I’d trust any other incubus. If succubi could invade a woman’s dreams, then Claris wouldn’t be a bad choice either.

6. He Does His Best for Lynette Despite Feeling Unworthy

This man really did his best to save Lynette from her unfortunate fate as Cupid. He basically even forces her to reincarnate as a human with a regular family, a regular life, and regular memories. In her reincarnation, she doesn’t remember she’s Cupid, but unfortunately, she could still become Cupid again since her divine artifacts, her bow and arrows, are still technically with her.

Still, Lynette remains in danger from other demons, so Allan decides to protect her from the moment she’s reborn. Of course, this leads to a face to face meeting with her which eventually leads to them getting back together and Lynette regaining her memories as Cupid.

Even then, Allan doesn’t allow himself to fully accept her love since he’s a demon now and feels tainted compared to Lynette. Thankfully, all’s well that ends well…

7. Lynette Becomes a Lil Demon Herself

And in the end, Lynette becomes a demon herself. Although, perhaps because she is just a fledgling, but the only thing that changed about her was that she grew a tail. She also still retains her matchmaking powers as she can still see the compatibility between two people.

It’s pretty adorable that Lynette and Allan ends up working together at Pillow Luxuria as a couple of demons in love helping humanity find their own love and dreams.

And that is all! Thank you for reading this stupidly long post about Allan Melville from Cupid Parasite. Well, I suppose the ones who really love this man probably didn’t mind reading so much about their one true love in CupiPara.

But surprise surprise, the next CupiPara appreciation post will seem like blasphemy after writing up about our dear Allan. I do hope you read that one, too!