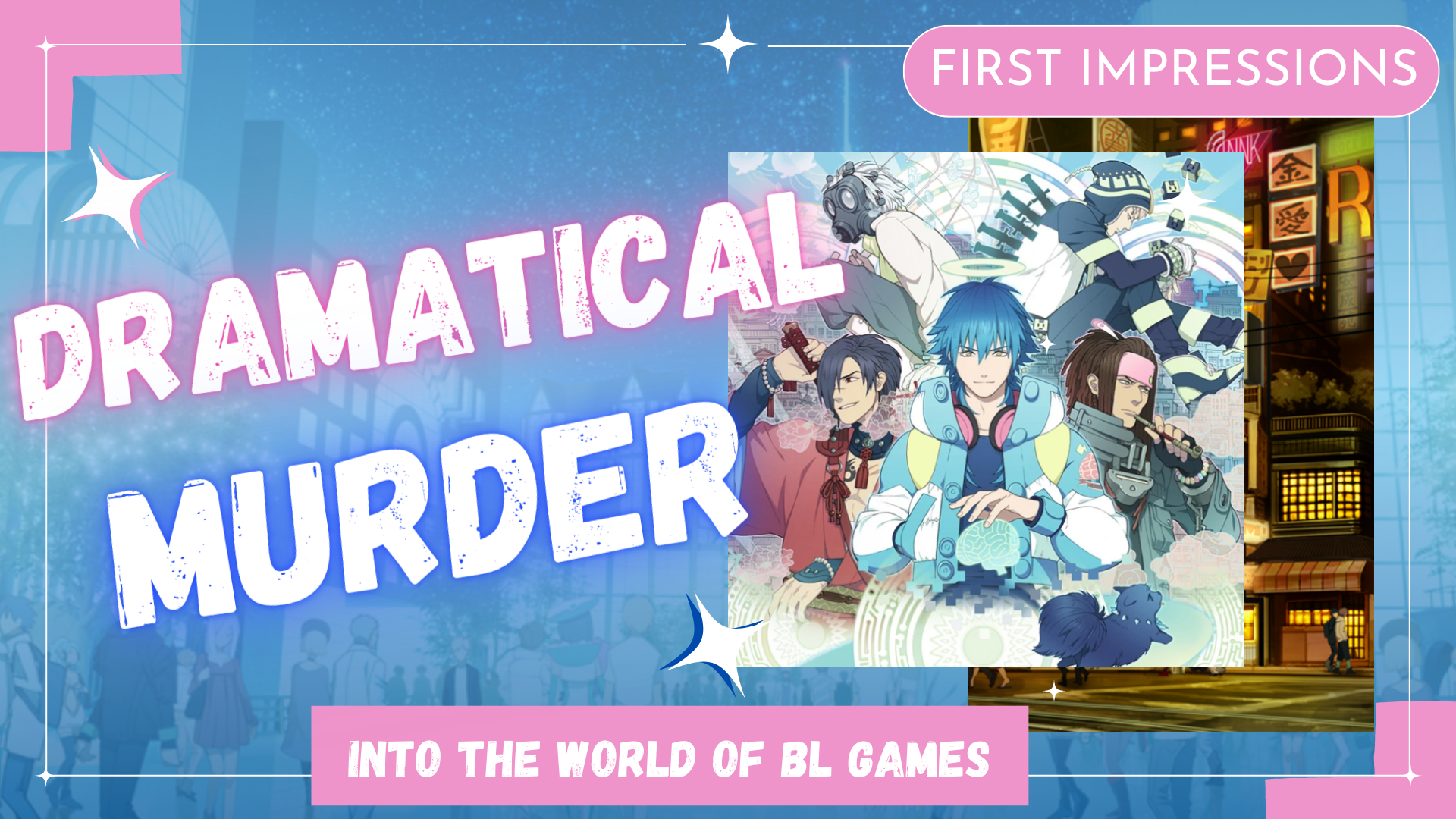 I’m back with a slightly different post than usual. Recently, I got the game, DRAMAtical Murder, off of Steam just out of curiosity. I had heard about it here and there over the years but never thought to really play it until recently now that I’m playing a lot of otome games. I wanted to try something different and so you have my playing a BL game. How’d that go?

Anyway, this post will only cover my initial impressions of the game up until the end of the common route. I am positively absolutely blind to DRAMAtical Murder story and mechanics.

Thus, if I’m leaving out details or if I’m getting the story wrong, please remember I’m still in the middle of playing the game! That message was to all my DRAMAtical Murder veterans because this game has been out for 10 years (whew).

Midorijima. Situated to the south of Japan, this beautiful island was once a place where people lived in harmony with nature. Then the Toue Corporation took over, driving off most of the island’s residents and forcing those who would not leave to live in the shadow of Platinum Jail, a walled-off megaresort where the wealthy wallow in luxury.

Aoba is a young man living with his grandmother in the Old Residential District, the last refuge of Midorijima’s people. While his peers join gangs and fight for dominance of the streets or immerse themselves in the virtual reality game Rhyme, Aoba works part-time at a junk shop and hopes only that his peaceful life will last.

But strange things are happening on Midorijima, and Aoba will soon have to fight… or lose everything that he holds dear.

I had written a summary of the story but realized that I’m really bad at it. Anyways, the Steam description is pretty much spot on without providing detailed descriptions or spoilers. I’ll expand a bit on the Steam story description so light spoilers ahead. Skip to next section if you want.

On Midorijima, organized groups called Rib (gangs), are disappearing one after another including the gang led by Aoba’s best friend, Mizuki. Not to mention Aoba is mysteriously ganked into a Rhyme game and forced to fight against a dude with a bunny head who does come back for revenge after Aoba somehow defeats him.

Wanting to figure out the mystery of all these strange happenings, Aoba is forced to team up with a few other misfits (read: love interests) and find out the secrets of Platinum Jail while finding out more about himself and his dangerous ability, Scrap which allows him to jump into the minds of others. Looking forward to how this all mess is going to turn out.

I jut wanted to pause before jumping into the characters to share a bit of the art because my goodness, I love the art style of this game. The character designs and even the backgrounds are just lovely. For a 10 year old game, it feels like it came out just this year.

In addition, since this game features gangs, each one has a unique logo. Whoever came up with the designs – I salute you.

Characters and My First Impressions of Them

I really like Aoba. That’s it. that’s all I’ll say.

Okay, I kid but he is definitely up there in favorite (otome non-otome) protagonists. Surprisingly, despite his nonchalant, please-let-me-live-my-life-goddamnit attitude, I find Aoba rather pure in a way. He also holds a lot of patience and understanding towards the others even if it’s not exactly clear from the jump. He also intrigues me greatly because there is definitely more to him than meets the eye. I feel as if he has another persona that I haven’t quite got to meet yet in the common route. I honestly want to see him too.

Oh, and of course, I have to say I like his design a lot including his hair (a bit of a sensitive topic, I know). I’ll admire it from afar (no touching!).

Also, Aoba has an adorable Allmate called Ren (CV: Higeuchi Waruta) who is apparently a Japanese Spitz. By the way, an Allmate is sort of an AI-type device that usually takes on the appearance of animals hence why so many tend to be pets. Yet, Ren also has a human appearance as seen when Aoba is forced into a Rhyme game.

I mean, I wouldn’t be mad if there was a Ren route, but is that technically zoophilia? But he’s not really an animal but more machine? AI? I think? So it’s more mechanophilia? Oh, this is complicated – let’s just move on.

A womanizer who indulges too much in the ladies’ affections but apparently a very good hairstylist – that was my initial impression of Koujaku here. It’s not that I thought badly of him though. Actually, it’s more like the ladies come to him so maybe I can’t blame him too much for wanting to please them especially since most, if not, all are his customers.

Anyway, he’s actually a pretty cool dude. He clearly cares for Aoba a lot. For instance, when he steps in to deter one of his fans from touching Aoba’s hair. If you didn’t know, Aoba’s hair is crazy sensitive to touch – almost as if it’s alive. Apparently even cutting it brings intense pain to Aoba.

Besides that when Aoba ends up in trouble or ends up intermingling with some miscreants (read: love interests), he really does act as best boy even if he does have a bit of a hot-temper especially when it comes to Noiz. Speaking of Noiz…

This dude comes across as a bit annoying at first. When I find out he was the one who dragged Aoba into the Rhyme fight, I got instantly wary of him. With right reason because he ends up being a bit of a pain in the butt. He definitely has an ego that won’t listen easily to others…especially Koujaku.

Anyways, Noiz is basically a hacker who is also a Rhymer. He is even part of a Rhyme gang and tries to recruit Aoba into it. And in the same scene he kisses him as if it’s nothing. It was pretty wild to me since Noiz literally meant nothing by it – almost as if he was just shaking his hand.

Noiz is still a huge mystery to me. I can’t tell what that guy is thinking.

Boy, this man intimidates me. I cannot for the life of me imagine how his route is going to go.

Also, the way we first meet him is after Aoba’s granny is kidnapped, Aoba is knocked out and dragged to his gang’s hideout and nearly raped by his men. So the verdict is still out on Mink. Yes, you read that right. It doesn’t happen and I’m happy Aoba is okay, but I still wonder what that was about.

Well, besides that, Mink is definitely the strong but silent type who takes 0 mess from anyone. He is also the one who figures out Aoba’s power before Aoba himself does and offers to help Aoba find his granny. Yeah, this is another guy I can’t figure out. I…I’m not sure how I’ll feel doing his route honestly.

This weirdo. I am horribly confused by this man but I think I’ll really like him. I mean, I already do with his weird quirks and personality but he also seems like a huge handful. Like, when he first appears, he falls from the sky and lands flat in front of the junk shop Aoba works at. It’s quite the scene.

Oh, and he calls Aoba “Master,” for some reason which is kind of cute but concerning since we have no idea why he does so. This man was also acting as if he had no idea people used umbrellas when it rains either when he pulls one out of nowhere.

Clear is a truly a special boy. Currently, I believe I’m on his route since I’m now stuck in Platinum Jail with this eccentric and have received my first CG of him…cooking breakfast…in the kitchen…naked with only an apron on. I think it’s safe to say I’m most likely on his route. Hey, I’m playing this blind and my choices are blind so it’s just by chance I stuck myself with the most peculiar one.

This should be fun. (Side note: He looks so cute under that gas mask though!)

I bought DRAMAtical Murder when my budget is already tight especially after I had a weekend out with friends. So I was a quite worried I wasted $20 on something less than stellar. Yet, I placed my trust in the “overwhelmingly positive” reviews on Steam and lo and behold, I ended up really liking the game so far.

This is my very first BL “otome” game so I was already highly anticipating playing something of a different caliber. So far, for those curious, I don’t see too much difference between this game and the usual otome games. I mean, male love interest – check, nerve-wrecking choices – check, trauma to unwound and solve – check, beautiful protagonist – check a hundred times over, lovely CGs – check, secret locked route – check, etc. The only main difference I see is that our protagonist is a man.

From the characters to the story, I’m already quite invested and hope I can actually get through the game instead of it sitting in my backlog for months. I’m on my first route, Clear’s, and I may end up writing up a post on his route or I may just wait until I finish the game. We’ll just have to see.

I’m not great with predictions so I’ll keep it brief:

Okay, that’s enough for predictions. I could do more but I know it’ll just end up becoming sillier and nonsensical. This post is long enough. But I hope some come true.

So, that’s it for me. I hope I will be back with another post on DRAMAtical Murder once I finished Clear’s route or the game. Thank you for reading and I wish you all a good day or night. And wishing myself luck in surviving this game – oh boy, I’ll need it.