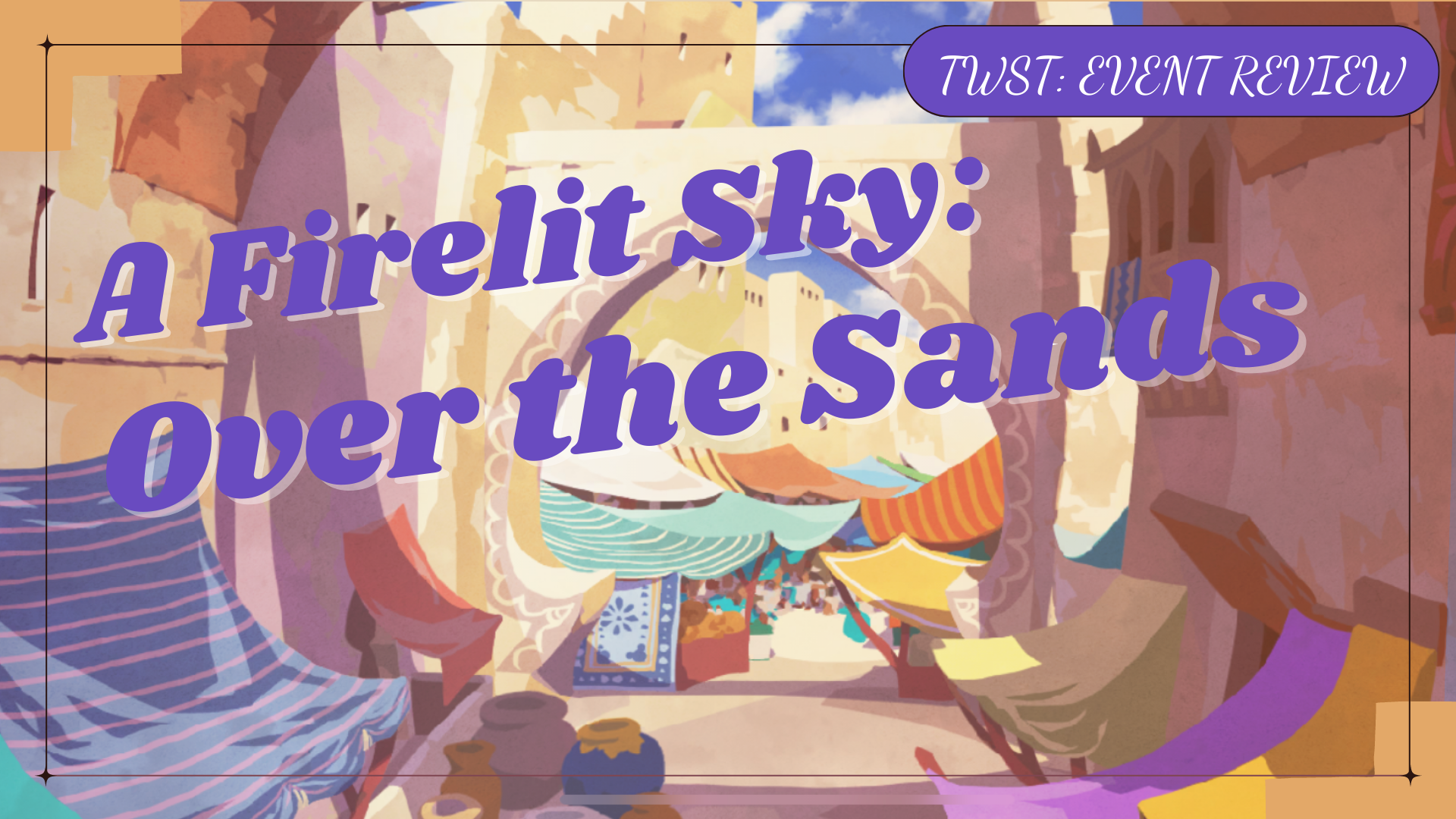 Hello all! I’m back to begin 2023 with NOT an otome post, but a post on Twisted Wonderland’s latest event, A Firelit Sky: Over the Sands. This event actually ended a few days before Christmas but I wanted to take a bit of a break the last couple of weeks before the new year so please excuse the belatedness of this post.

Still, it’s not a bad time to write this as this event was Scarabia-centric with Jamil at its center being the SSR of the event. Kalim is kind of there as since the two acted a bit like tour guides during the event as some of the students visited the Scalding Sands, their homeland.

And currently, the newest SSR is Kalim’s New Year card which I just got and it only took me all my keys and gems because he didn’t come home until pity 🙃. But it’s worth it since Kalim is my favorite character in TWST.

Now, enough rambling, onto actually talking about the event!

Every year the Scalding Sands holds a major fireworks festival based on the story of Aladdin (the movie Scarabia and Scalding Sands are based on). Kalim’s family, the Al-asim’s, being as big and influential as they are, are central to helping make the festival be organized and run smoothly. Of course, this is with the help of Jamil who ends up serving as a tour guide to a select few students of Night Raven College thanks to Kalim’s overzealous nature of wanting to invite his friends along to the event.

The lucky students that were able to go included: Trey, Cater, Malleus and of course, Grim and you – the MC. Despite the added extra work for poor Jamil, he takes it in stride and does his best to accommodate his guests and act the professional (until his adorable little sister comes along and ruins in image extravagantly well). During their stay, the students and you learn more about the Scalding Sands and Silk City, their hometown and the central city of the Scalding Sands while indulging in what the city has to offer through food, spices, and silky clothes.

The event ends with the students enjoying a brilliant fireworks display as Jamil actually admits that despite the strenuous day and tension he felt throughout the day that being with friends like this was pretty good.

This event banner was pretty straightforward as it featured the usual SSR (Jamil) along with a SR (Malleus). Cater’s card was given as you completed the chapter events. I didn’t pull on this banner since I knew that Kalim’s SSR card was coming along soon and while I love Jamil too, Kalim is my favorite among favorites so I had to make an exception for him. I mean, I do have Jamil’s dorm card so let me have this Kalim, my first Kalim SSR, please and thank you.

The event was pretty short and sweet which I liked. As someone who loves the Scarabia dorm and the two boys, this event was great to learn more about them and their homeland and I highly recommend looking this event up if you missed it and love Scarabia, too. People have posted the whole event chapters on YouTube and I’m sure there are Tumblrs out there that have put up the event in summary as well.

Speaking of Jamil, his younger sister, Najma, is introduced to us in this event and I loved her! She was a bit on the sassier side but still pretty chill and gave us some gems in the form of telling us some sweet stories of Jamil from his childhood.

And Jamil’s reaction was priceless along with Malleus quip that did not help in the slightest but was funny all the same.

Honestly, imagining Jamil as a child doing all that is so hilarious to me considering how he’s usually so poised (when he’s not having a mental breakdown over Kalim’s spontaneous actions). Not to mention, Kalim also shares a little bit about Jamil back in the day. When they were kids, Kalim would often want to play with Jamil but because the Al-Asim “house” is so big, it was often hard to find him so Kalim ended up using the security monitors to find him. Understandable, but a little concerning.

And yes, Kalim’s family truly is loaded. In Silk City, you can basically see his family’s estate from any point in the city even if you’re rather far away. It looks gorgeous but my God, in the words of Cater it’s really just like “an amusement park.”

Honestly, I would like to live there. It isn’t just because of how glamorous it is, but because despite their wealth and influence over Silk City (because let me tell you, it was largely due to the Al-Asim’s ancestors that the city became what it is today), the family themselves seem rather chill and friendly. I mean, if Kalim is anything to go by then you’d think the rest of the family is pretty similar. We actually do learn a bit about Kalim’s father in this event as well. Apparently, his father is a key player in the economy and government of Silk City and often hosts quite a few powerful and influential figures at the Al-Asim palace. He is also the type of man to let his son, Kalim, step away from doing official duties to hang out with his friends so a plus in my book. Actually, I do believe Kalim said he finished his work early so his father let him free, but from the sound of it in general, his family definitely spoils him (I mean, if you live in the lap of luxury, it’s hard not to be). But he’s spoiled in a good way…right? (I may be a bit biased.)

Anyway, I think with that, I will end my little thought dump here. Due to the short length of the event, I don’t have a lot to say but I really enjoyed this event and loved learning about the Scarabia boys and their homeland. As said before, if you enjoy any of what I said then you’d like this event.

Good luck to those pulling for Kalim’s New Year card and/or his dorm card (which is also up) and see you next time!

I couldn’t leave without sharing these absolute gems from Jamil. Okay, bye for real now.