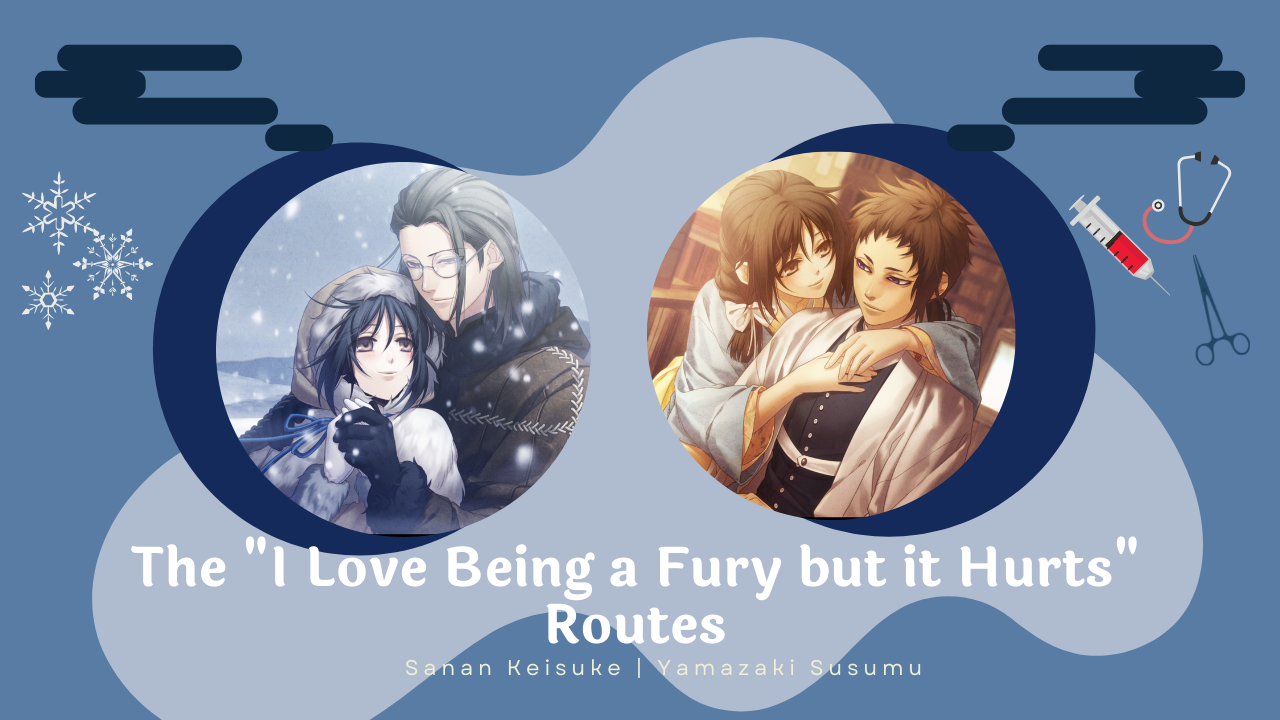 These two characters were apparently present in the original game, but didn’t have routes until the remastered dropped on Steam. I got to say, one route was more or less what I expected while the other was more enjoyable than I thought it would be.

Okay, so I don’t mind Sanan (sort, it’s a long story that I will expand on when we reached Heisuke’s route), but I didn’t feel too much for him as a husbando. I wanted to give him a chance especially considering how I knew Kyoto Winds only scratched the surface of characters like him whose route was only recently introduced but it still fell kind of short for me.

But on the story lore front, it was pretty interesting. You will learn more about the ochimizu or Water of Life from Sanan’s route than perhaps any other. It makes sense considering he is the one who is fervently researching the elixir to the point that it can go to some extremes including working with Kodo.

Yes, that’s a thing that happens in his route and yes, he betrays Chizuru by handing her over to Kodo AFTER he apparently kills Heisuke who tried to save Chizuru from Kodo and Kaoru. The poor girl ends up in house arrest at Shirakawa castle (remember that name because it’s a setting that pops up in other routes) where her father wants to use her to spread the Fury curse to every man, woman, and child in Japan, no, the world.

Honestly, even though I do wonder what Chizuru sees in Sanan as a love interest (what can I say? He’s not my type), I will commend him for the double feint strategy that he used to bring down Kodo and Kaoru once and for all. He fooled us all with his two timing strategy in keeping his friends close but his enemies closer. Let me explain.

See, ultimately, Sanan’s priority his saving himself and the other Furies from their imminent destruction. We learn that the price of using their Fury powers is the degeneration of their life force which basically means they kill themselves a little each time they activate their Fury powers whether it be to battle against other Furies or to heal their injuries.

In order to find a solution to this issue, Sanan leaves the Shinsengumi with his Furies because he felt being there would not only stilt the progress of his research but also make them a forgotten group who melts away into the shadows of the Shinsengumi. It’s quite sad in a way and I understand that what he did, even if you don’t condone all of his actions, was in self-preservation.

Anyways, in the final showdown between Kodo, Kaoru versus Chizuru, Sanan, Heisuke (who didn’t actually die but faked his death courtesy of Sanan!), and Sen and Kimigiku who also came to help, Kodo is killed by Kaoru who in turned is killed by Heisuke. There is a bit of redemption when it comes to Kodo in the end as he managed to stop Kaoru from killing Chizuru but I still dislike the man too much too care for that.

Before he dies, Kodo does mention there is a cure to keep the Furies but it is located in the West where Furies called “vampires” live and it’s their blood that holds the key. This sets up the epilogue where we see Chizuru and Sanan travelling in a snowy winter wonderland on their way West.

All in all, it was a pretty cute route despite what I said earlier but I didn’t develop any sort of romantic attraction to Sanan. I tried but he’s just really not my type, I suppose. But boy, he is quite coy because the way he plays with Chizuru’s heart is pretty endearing and amusing to see.

Oh, Yamazaki. In my Kyoto Winds post, I liked Yamazaki as well but was pretty lukewarm to him on the romantic front. Yet, in Edo Blossoms, I felt like his route helped improve his image for me greatly and while he is tied greatly to the Shinsengumi, his conclusion is more sweeter than the others who were close to the brigade.

Yamazaki is also one of the newly turned Furies who seems to embrace it as before he felt rather helpless and weak compared to the other warriors in the Shinsengumi. Being part of The Watch, the Shinsengumi’s intelligence and spy corps, he is more trained in fading away into the background to be their shadow. He is also trained as a medic which is an important detail for later.

This route is really about investigating the whereabouts of Kodo and his Fury army before they take over all of Edo. The Shinsengumi story feels secondary to emphasizing the Kodo chase and Chizuru and Yamazaki’s growing love for each other. The ultimate climax takes place at Shirakawa castle where Kodo and his boys have holed themselves up.

It’s really interesting because in the end Chizuru tries to kill her father by her own hands after Yamazaki used up a good deal of energy taking down all these Furies. Yet, her noble act is interrupted by Kazama who appears out of nowhere to do the deed. Kind of anti-climatic but there you go.

Another interesting note is that after all that, Yamazaki reports back to Hijikata that he will be leaving the Shinsengumi because he wants to become a doctor and live in relative peace with Chizuru. Thus, they spend the rest of their lives in peaceful ignorance as the two enjoy their lives not even really knowing what became of the Shinsengumi (maybe for the best?).

This route really did prove to be cuter than I thought and they way the two romanced each other was entertaining to see. At the end of Kyoto Winds, I liked Yamazaki but felt no spark of love, friendship maybe, but not love. But after this game, I gotta admit, he’s cool.