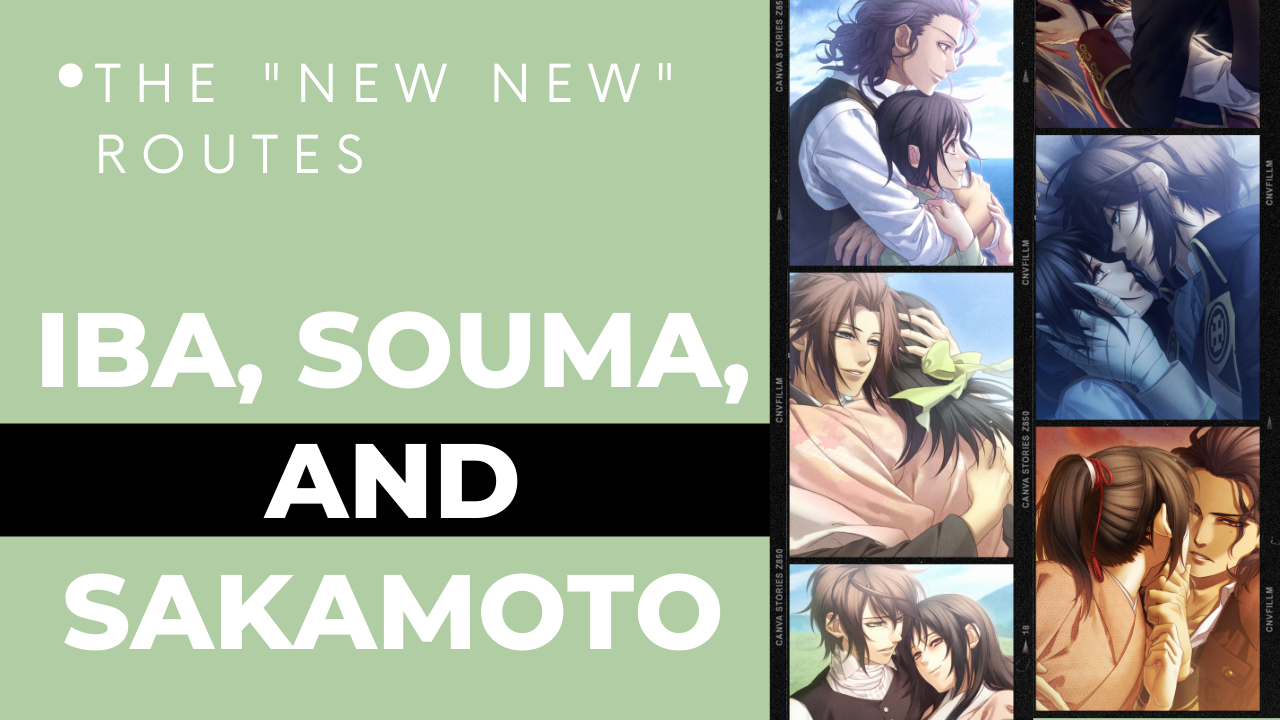 I started Edo Blossoms with the characters that were introduced in the remastered edition. I know OG fans may not care for them as much as the original 6 characters who had routes but I honestly can say that you should give these guys a chance, too. They can and will try to take your heart away from the original guys. You don’t believe me, but just try their routes anyway. Please, they deserve some love, too.

Anyways, of course I started with Iba. He was my first route in Kyoto Winds so I was really looking forward to do his story again considering his was kind of wild and emotional towards the end.

And well, our poor baby Iba here is having a rough time with his demon arm that he attached on himself to fight against Takeda in the first game. As a human, the arm is consuming him slowly as it makes him a tad bit more aggressive and more lustful towards Chizuru much to his horror (the demon arm demands a mate, what can I say?).

On top of that, Iba can’t help the Shinsengumi who are standing on their last legs as they fight against the impending doom that is the falling bakufu and the rising Imperial forces due to his vow to not interfere with human relations since he has the power of a demon now. But it’s frustrating and takes its an emotional and mental toll on Iba, but thankfully Chizuru comes up with a solution.

I will leave the backstory there, if you want to know more then play his route. I did enjoy his route again and was anticipating it fondly from when I played his route first in Kyoto Winds. Again, I would warn not to do the routes in the order I played them especially if you just jumped to Edo Blossoms, then the next two routes as well are not ones to start with.

I wanted to do all the “outsider” routes, meaning, the new routes introduced in the remastered before doing the good ole original routes. So while I liked Iba’s route and thought it was cute and touching at times (especially since the romance kicks in gear in Edo!), I felt like a few of the original guys were more for me. But Iba still cute though – moody and all (and he gets quite moody in this route for good reason).

Sakamoto, this dude, I feel especially as if I couldn’t quite get behind his route this time. I mean, I’m not saying it’s bad but I realized that Mr. Tosa isn’t quite for me. And the fact that he’s voiced by Daisuke Ono, who is kind of a fairy, yes, a fairy in the seiyuu world (his versatile voice, his age…how old is he??). I’m feeling pretty bad that Sakamoto wasn’t one of my faves especially considering that Mr. Ono plays some characters I just love.

But, it was still interesting playing a route that went quite a different way than the rest of the routes since Sakamoto is the true outsider of the new routes introduced. He has no ties to the Shinsengumi like Iba and is his own wanderer. However, I would say out of all the men here, he is the one that will probably give you the most romantic moments since he’s such a flirt. He is quite the wild one and you will often express exasperation on how to deal with such a rambunctious man but he’s cute in his own way. Give him a chance, too.

His story is more focused on finding his old pal, Nakaoka, who is now helping Kodo by being in charge of his own little Fury brigade that is wrecking havoc on the streets of Edo. Like, for real, the poor people of Edo are being murdered and mutilated out on these streets by these Furies who are in need of blood and no one seems to be bothered to keep them in check. Kodo doesn’t care especially since he seems hellbent on turning the whole of Japan into his Fury army – more on that later.

In the end, Sakamoto ends up having to face off against his friend who dies, turning to ash right in his arms. Even if you don’t feel much for Nakaoka, it’s hard not to feel bad for Sakamoto, but thankfully the route wraps up in a happy ending with Chizuru and Sakamoto going out to see the world. It’s pretty nice especially knowing that Sakamoto is dead in any other route that you play. I’m a sucker for happy endings, what can I say?

Oh, the cinnamon roll of the group. The true tortured cinnamon role who I feel is in anguish through most of his route. Seriously, most of his CGs was him and/or Chizuru in some sort of mental strife and I won’t lie, this route was emotionally tough especially if you love the Shinsengumi.

He definitely grows in this route though as you’ll see in the end because despite the fall of the Shinsengumi, he survives to carry on the legacy (can’t quite say the same of the real Souma but that’s another story for another day). Out of all the routes mentioned thus far, Souma’s route is the one that follows what happens within the Shinsengumi the most and so if you wanted to do an “outsider” route, his is the place to start if you want a more fuller story.

However, my lord, as I said before his route is perhaps the saddest. The fact is, prepare yourself to say goodbye to each Shinsengumi member as you progress through his route. A lot of the men will pop up, only to sacrifice themselves to help Chizuru and Souma get away from some imminent danger or obstacle.

Whether it be Harada, who was a dead man walking anyway with his fatal wound to Okita who was also dying from his tuberculosis or even Heisuke who, despite his Fury powers, falls in battle – in Souma’s route you will bare witness firsthand to the fall of the Shinsengumi. I already knew the real Shinsengumi fell apart in 1869 only 6 years after they officially formed, but still, did the developers have to put that scene near the end with a dying Hijikata passing on the leadership of the Shinsengumi to Souma? Yes, it was necessary for the route, but not for my feels.

Anyway, I found it interesting that while Souma grows as a person, as a warrior he more or less stays the same in terms of strength. Some people may disagree, but I don’t mind that actually. It was said that Souma tried and tried his best to train hard to become strong for Chizuru but he still would never have beaten Kazama and even Miki may have been a stretch if Miki hadn’t backed down. Not everyone is meant to have such character growth and I respect the fact that Souma had limitations for what he could do.

Granted, his story probably called for it, but it would be a tad redundant if everyone successfully got strong to beat the baddie. Plus, I even felt sorry for Miki in the end, too. He wasn’t twistedly evil to the core like Takeda, but a man grieving for his assassinated brother and stewing in hatred for the perpetrators (all of whom had died by the time he confronted Souma for the last time). He was tired of even living but being a Fury makes it hard to just die.

Interesting path, with a slightly nonconventional take on the ending. I give it a good rating for just being different honestly.