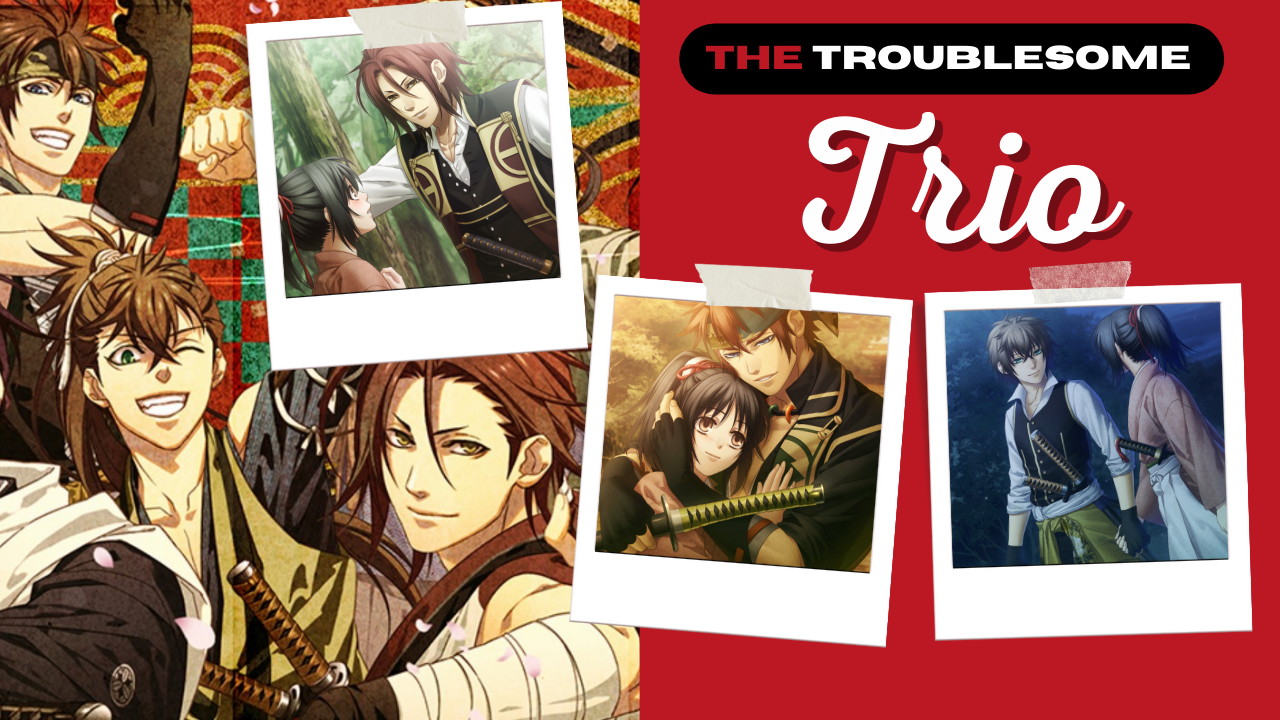 I got so triggered doing this route. Not because of Heisuke. My man Heisuke was great, a charm.

No, it was this man:

See, Sanan here used a kiss to force Fury blood down Sen’s throat. Apparently, feeding Fury blood to a Demon like Sen can cause them to be just like Furies and not only that, since it was Sanan’s blood, Sen can eventually fall under his control. Pretty twisted stuff. Real sick stuff.

I know some of y’all out there love Sanan, but this crossed the line (doesn’t help I’m more biased towards Sen anyway). And yes, I say this a someone who played Sanan’s route before Heisuke’s so I understand what Sanan’s deal is, but I don’t have to condone it. This is when I remembered that apparently in the original game, Sanan acted as a main antagonist in some routes which explains everything this route was.

But what about Heisuke? He’s just as loveable as ever in this route and because he is determined to help take down Sanan and his ever-increasing army of Furies where he is taking every man, woman, and child, Heisuke is really up there on my favorites list.

Heisuke is one of the “oldest” Furies of the Shinsengumi so while he has grown accustomed to the lifestyle, he doesn’t relish in it as Sanan does. Those two are good juxtapositions of each other. Though Heisuke does grow feelings for Chizuru, he feels that one day he may lose it and go out of control like some of his Fury comrades or become like Sanan who is…self-explanatory. He deems himself dead already and a monster.

Yet, Chizuru is finally able to convince him otherwise and conquering his negativity and low self-worth, Heisuke is able to confess his feelings for her before going to take Sanan on (and Sen cause at this point, she’s losing control of herself. I cry.)

Thankfully, alls well that ends well. Sanan, that creep, is vanquished. Sen regains her senses and Heisuke and Chizuru are allowed to live in peace after learning about a spring that can help ease Heisuke’s Fury side. Huzzah!

My boy here wasted no time in kissing Chizuru in the FIRST chapter AND it was basically the beginning. Yet, it was because Chizuru was having a bit of a meltdown after trying to leave the Shinsengumi because she felt like a burden to them for like the umpteenth time. Harada caught her and kisses her because its apparently one of the only ways to calm a woman…the player.

Anyways, what Chizuru was also upset about was Sanan being pushy gaslighter and trying to coerce her to help in his Fury research. Do I sound a bit harsh towards Sanan? Did you not read what I said about him under Heisuke’s section above??

Anyways, moving back to Harada, he is a good guy. Period. He is the only Shinsengumi man to remain human at the end of Kyoto Winds, so you don’t have to worry about feeding him some blood or fear he may go on a Fury rampage. Due to this, the arc sort of lies in Chizuru, who is far more conscious of her identity as a Demon and continues to struggle to accept the humanity in her. She wants to love Harada, but is she, a Demon, worthy of that?

It doesn’t help that this man is a natural-born flirt. It’s too easy misreading his genuine affection for Chizuru as just simple teasing flirtations until he comes out right and says he loves her and Chizuru is still just like: Who?

Anyways, I stan these two. Despite being such a flirt, Harada never came across as anything short of a good guy who cares about Chizuru regardless of what kind of blood runs through her veins. As someone who also struggles with identity issues in a different way, it’s sweet seeing the unconditional acceptance.

I really feel like Nagakura is underrated and I’m saying this as someone who doesn’t even simp him like that. I liked his route quite a bit and it was worth getting that final CG above of him without his signature headband. Let’s gives this muscular man some credit, no?

Nagakura’s main arc throughout his route his accepting the fact that he’s a Fury. At the end of Kyoto Winds, he was sort of forced to drink the Water of Life thanks to a dying Inoue. Nagakura himself was on the verge of death, too, but someone had to stay alive to protect Chizuru.

Nagakura’s turmoil of becoming a Fury reaches a climax when Amagiri shows up to take Chizuru away from him. The ensuing fight pushes Nagakura to lose himself again to his Fury side. Thankfully, Amagiri beats him up so hard, he snaps out of it but becomes a depressed mess realizing he had failed again at properly protecting Chizuru. Honestly, a bit sad seeing the once lively Nagakura becoming a hermit in the mountains (I kid you not).

Anyways, between watching him struggle with Fury acceptance, be prepared to see Chizuru being treated as a younger sibling for most of the route. To me, it wasn’t too bad but poor girl. Nagakura is definitely one of the more blockheaded ones so when he finally confesses his feelings, he is quite the amusing mess.

And of course, after a final showdown with Amagiri where Nagakura proves himself to be worthy of protecting and loving Chizuru, Fury or not, the two lovebirds live happily ever after.

My man’s route was shorter than the others though. They really did him dirty, huh?