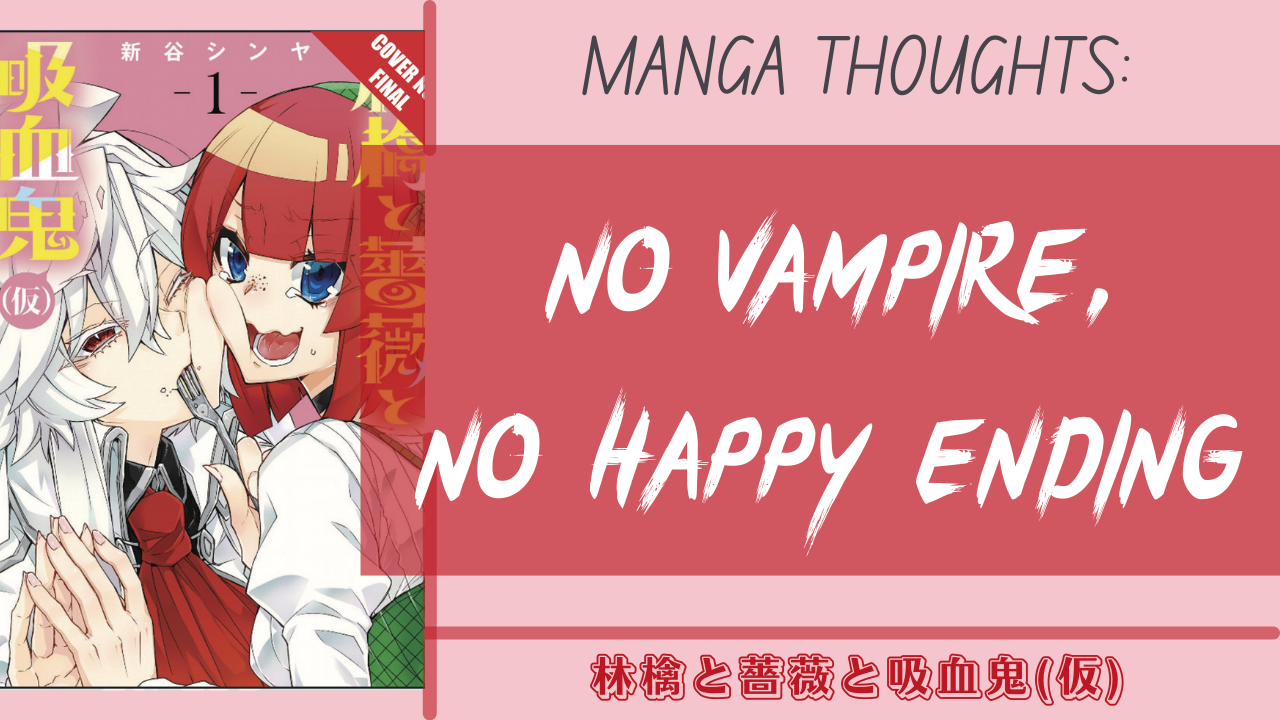 MangaLeave a Comment on [Manga Thoughts] No Vampire, No Happy Ending

I’m back with a short little review of a short and sweet manga called, No Vampire, No Happy Ending. Very funny, but a bit on the lewd side. Come, read, and be introduced to a heroine who is obsessed with finding a happy ever after with her dream vampire…or not.

Arika is what you could charitably call a vampire “enthusiast.” When she stumbles across the beautiful and mysterious vampire Divo however, her excitement quickly turns to disappointment as she discovers he’s not exactly like the seductive, manipulative villains in her stories. His looks win first place, but his head’s a space case.

Armed with her extensive knowledge of vampire lore, Arika downgrades Divo to a beta vampire and begins their long, long… long journey to educate him in the ways of the undead.

10/10 accurate summary because boy, Divo sure is something. He really is not like other vampires I’ve encountered in fiction for sure. Actually, Arika is also a special case that is worth mentioning, too.

If you want a visual summary, TOKYOPOP released a YouTube trailer for it.

The heroine of our story and a vampire fanatic enthusiast since she was a young lass. Arika passionately searches for the existence of vampires while insisting they’re not all bad. She lives in a town of non-believers so you can be sure she’s had a tough time. She has written a 14 volume romance series between a vampire and a self-inserted heroine.

Divo is an amnesiac vampire who Arika finds at the old abandoned castle in town. He is certainly handsome, but he is a bit on the slower side when it comes to using his brain. Divo defies the usual logic when it comes to vampires and his seemingly lack of self-awareness over how a vampire should be, drives Arika to craft him into her ideal vampire.

Ike is Arika’s younger brother. He is the one who actually found Divo first since he went up to the abandoned castle to play. He looks tiny and pretty young, but he is actually quite wise at times. Probably because he is the straightman of the series.

The owner of her own cafe which specializes in pies. She tolerates her granddaughter’s vampire-related antics. On the contrary, she relishes in it and plays a more supportive role than most guardians would.

These girls come a bit later in the second volume of the manga but they are important so I’ll put them here. These ladies are revealed to be the other vampires in town, but what is their role in the story? Read it to find out!

These two are the vampire hunters that come in a few chapters in. They are seeking out vampires in Arika’s little town and end up setting their sights on Divo. Interestingly enough, it is revealed that Sai is a dhampir or a half-vampire who was taken in by Novalis after he was separated from his mother.

To be honest, the relationship between the two is really questionable (too put it lightly) but at least it’s called out in the manga.

No Vampire, No Happy Ending was a really good read in my opinion! The comedy is quite solid and the overall vibe of the manga is pretty light-hearted despite some deeper topics popping up a bit here and there. Even considering that, the manga never felt like a heavy read.

Since the story focuses heavily on Arika and Divo’s relationship, I will quickly go over how I feel about them.

Arika is a special brand of heroine. She doesn’t shy away from declaring her love for vampires and is actually quite scary when it comes down to fulfilling her dreams of having a romantic relationship with a vampire.

Admittedly, she doesn’t seem like the most morally upright heroine who is conscious of others. Indeed, in the beginning it seems as if she is taking advantage of Divo to fulfill her vampire fantasy (though he does consent). Due to this, in the beginning she may come across as a bit abrasive and selfish to some, but personally perhaps due to the comedic nature of the manga, I didn’t really think that way.

It also helps that it is explained why Arika feels so strongly towards vampires as she believes they get an unfair reputation for being the baddies and wants people to understand them better.

(Read all manga panels from left to right, please!)

She truly embodies all of us fangirls (and fanboys!) who believed the villain was just misunderstood or they just needed love to turn over a new leaf. Don’t deny it, you’ve all been there.

I’m not going to lie, I find Divo quite adorable even if he is an airhead. He was apparently residing in the old abandoned castle rumored to be inhabited by a vampire long ago before he was found by Ike and Arika. Is it the amnesia that has made him to be this way? Who knows, you gotta read it.

But Divo is certainly the mystery. He can eat garlic just fine, he can see himself in the mirror, he can be near moving water, and he can even sunbath to his heart’s content. There is also the matter of his body…

[Content Warning: Nudity. Close Your Eyes and Scroll if Uncomfortable!]

So yeah, who knows what Divo is exactly. He’s a “beta vampire” (Arika’s words, not mine) who loves pie a bit too much, is a bit androgynous, and agrees to help Arika fulfill her dream of romancing a vampire. Divo also is earnest at becoming Arika’s ideal vampire especially if it helps recover his memories.

Truly, looking at a fantastical couple like this makes me as a reader a bit worried on how things will turn out.

Anyways, that’s all for the review! I really hope you pick up this manga and enjoy it as much as I did. I mean, if not for the plot, at least pick up for the art and…