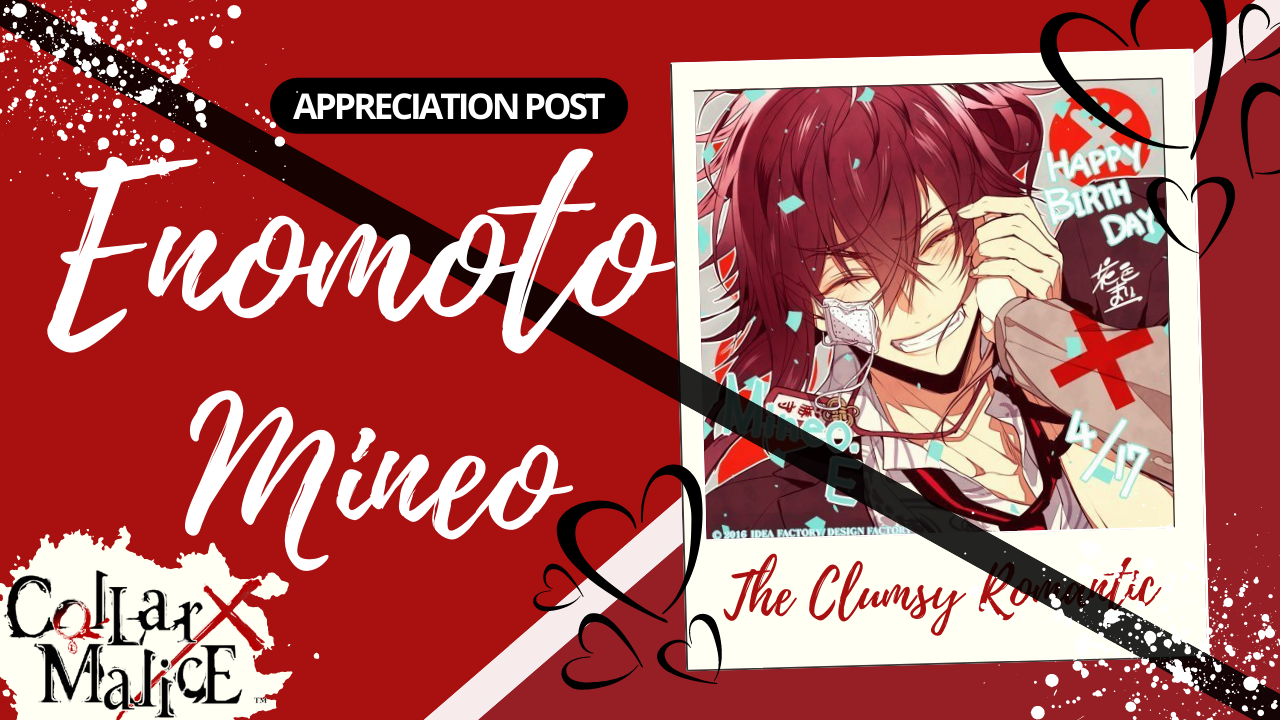 I’ve never done an appreciation post so, how do I do this? Do I list out all the reasons I love Enomoto or do I “gently persuade” you all on why you should and will love this man?

As of September 9th, I have returned to update this post to say I have finished typing up a series of appreciation posts on all the love interests of CxM. Click down below to be taken to the others if you wish:

Anyways, I’ll try to keep this short since I know you all have busy lives.

I just finished his route and somehow achieved his best ending blind! I felt such a sense of achievement but more so knowing I had completed such a cute and comedic route. It’s Collar x Malice, so it’s a more darker and grittier game than some other otomes out there, but it balances itself out well with the more light-hearted moments and so far, Enomoto’s route was the treasure trove of gold for those kind of moments.

My man is literally out here forcing himself to eat carrots, poisonous things those are, just because he is a man of his word. Enomoto, please, sir, don’t do this to yourself.

When I initially saw Enomoto, I liked how he looked out of all the romantic interests but boy, oh boy, I was not expecting a face like that to have such a boisterous and eccentric personality. But most importantly, because of his awkward earnest attempts to be seen as a man and senpai Ichika and the others can rely on, Enomoto just comes across as stupidly adorable. I’m sure he’d take that as a compliment (not).

Moments that helped me fall for this man:

Yes, I made a short video of this because to fully appreciate his drunkenness, you have to listen to this man. Listen to how he laughs. He sounds so cute to me, but he also sounds like a toddler high on drugs at times. Poor man is also crying in the beginning cause he thinks the world is going to end and so no more ramen for him.

Please, I want to hug him.

2. Confessing to Ichika the Right Way

Okay, it’s not just him, but the others I’m sure confess well too. But, Enomoto is special as he took off his hairband and eyepatch to properly confess (like a true man). When this CG popped up, he sort of hit different. Either way, I love him with or without the eyepatch (but okay, the eyepatch makes him look a tad cooler).

It’s clear this man is a romantic at heart. He’s just so pure at it that he believes even Shiraishi’s love advice. Oh dear.

If you look at the Collar x Malice Dictionary there is an entry that reads: “Enomoto’s favorite book is ‘100 Heart-jerking Love Confessions.’ On page 32, there’s a section called ‘Killer Lines that Shoot Straight for Her Heart.’ It’s best to forget that you’ve ever seen this.”

4. Him just being a Hot Mess

Between being a drunk and sleepy boy (I will ashamed both types are my weaknesses in otome), Enomoto often times is a bit of a mess as a person. He…truly is “adulting” as you young’uns say.

I’m not sure I need to say more especially if you watched either of the videos in this post. Yet, I will add that he is very relatable (at least for me) when it comes to the social game. He would be me in a romantic relationship. I can already see it.

5. His love for History

What can I say? I’m a history girl, too. Also, seriously look up Date Masamune. He’s pretty interesting.

6. Facing Ahead to the Future After Running Away for So Long

Enomoto has made some mistakes and has lagged behind the others due to his own personal feelings of responsibility and broken trust that arose as he looked into the April and May case.

A personal friend and senior who he had whole-heartedly looked up to had ended up a victim of Adonis. Not only that, but learning some hard truths about his friend made Enomoto look inward at himself and his own sense of justice. He was at a standstill. He wanted to pursue the truth, but the possibility of finding out more harsh realities scared him.

It was an interesting journey through his character throughout his route and I’m glad he was able to move forward in the end.

And that’s all that we ask for.

And that is all! If you’re not convinced to stan this man after this then it’s your loss. On a side note, as my 2nd route after Okazaki’s, who knows if one of the other 3 will steal my heart harder than Enomoto? I guess we’ll see.

Also, can we take a moment to also appreciate Enomoto’s seiyuu, Saito Souma? By that I mean, look at these gorgeous photos:

I’m not going to lie, I really thought this was a woman when I first saw these pictures (specifically the top right one). Browsing Pinterest has never been more fruitful.

Are you persuaded yet???