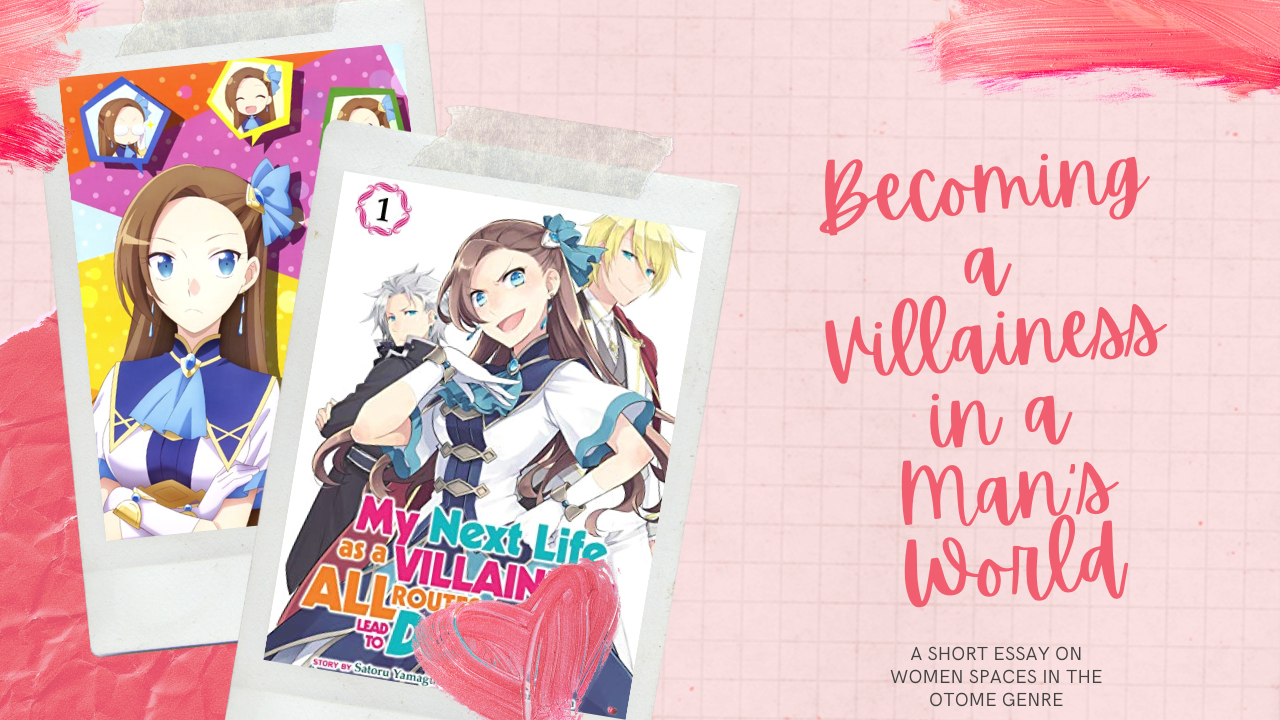 Academic, Opinions, Otome GamesLeave a Comment on Becoming a Villainess in a Man’s World

Note: This piece was originally written in one of my graduate courses last month as a short little final project. I thought it was a good fit for the blog so I decided to publish it here since the subject of otome games, manga, and anime are venues I hope to study and research more in the future. Plus, it’s just fun! I won’t lie when I say I have indulged in this genre for about the last year or so, so it was a given to explore this more from an academic angle. I hope this short little article gives food for thought and I hope to publish more about it in the future.

I have previously done research on how Japanese women craft personal spaces for themselves through cosplay, sex work, and otome games in order to present themselves as subversive to society’s expectations while unknowingly playing right into society’s hands. This topic still interests me as I still believe it is a pertinent topic of discussion especially in a world that is growing more and more disillusioning. In my previous paper, I brought up just how these personal spaces were forms of escapism that only offered temporary rest from the harsh realities these women face every day. In this short essay, I want to expand on these previous assertions by exploring another potential avenue women are carving out spaces for themselves: the otome isekai genre in manga. Aa focal point, I will discuss one of the most popular manga of this genre, My Next Life as a Villainess: All Routes Lead to Doom! as a typical example of what one can find in the world of otome isekai manga and explore how its themes and characters can serve to be a reflection of another idealized space for women.

In particular, a typical otome isekai story involves a female protagonist (male protagonists are sparse) who usually befalls some sort of tragic incident in this world and is transmigrated into another world where she is usually some sort of princess, duchess, or heiress from some influential European/Western family. Alas, she soon discovers that she is not only trapped inside a game, novel, or manga that she had probably just played or read recently, but she is the villainess who is doomed to a terrible ending either in a horrendous fall of social status leading to exile or, more typically, death. The otome isekai genre is fairly recent as most manga and light novels from this genre have only emerged within the past 5 years and its popularity only seems to be growing. Despite the overused themes, settings, and tropes appearing repeatedly from manga to manga, this does not seem to stop fans from enjoying the genre.

Specifically speaking,  My Next Life as a Villainess: All Routes Lead to Doom, is not much different. The female protagonist was originally an ordinary 17-year-old otaku living in Japan before she finds herself in the otome game, “Fortune Lover” as the main villainess, Katarina Claes at age 8. Fortunately, she was a big fan of the game and knew exactly what to do in order to avoid her fate of being exiled or killed. She does her best to be a good person and make sure to avoiding acting or behaving in a way that could trigger a “death flag.” However, in doing so, Katarina, unbeknownst to her, gains the love and adoration of all the love interests in the game including a couple of the other female rivals. Katarina’s situation appears to almost be a utopic paradise for any fan of the otome isekai genre. Series like My Next Life as a Villainess is the new trend arising, not just in the Japanese media industry, but in Korea and China as well.

However, what is it about the otome isekai genre that gives it its popularity? Naturally, those who read these books or manga tend to be young teenaged or young women. I noticed as I read through a few of these that many of the manga found in this genre feature young teenaged protagonists who almost always are isekaied into a world where they become the villainess. Sometimes they become side characters or even the heroine, but these instances are not too common with the latter being rather rare. Perhaps, as we have discussed in class, specifically in pertaining to gyaru girls in Sharon Kinsella’s piece, a lot of women who do not fit the molds of society tend to be seen as the bad guys, the instigators, the villainesses in media and by society. Usually, it is men who are the perpetrators of bringing down these women and constantly remind them of their subpar status in a society that caters to the deliberate misconstruing of one’s individuality and sense of self. Women can’t be women in the capacity they want to, so instead they turn to fantastical worlds that center around characters who actively shape their world, or in Katarina Claes’s case, the world bends to serve her due to her doing her best to change her fate which she successfully does beyond what she could have imagined.

I daresay that one of the draws to this genre and the reason the same story is told over and over again is due to the projection of seeing the ideal, if not desirable self in these otome ladies. It could just be idle entertainment, but I do believe there is a subconscious pull that most readers have when reading such stories. I can only harken back to Hasegawa Kazumi’s essay, Falling in Love with History: Japanese Girls’ Otome Sexuality and Queering Historical Imagination, who explored how Japanese girls embraced romancing games and created their own narratives and imagined spaces as they saw fit through the otome game, Hakuoki. The following quote from her essay connects well in describing the role shoujo manga as a whole has in creating spaces for women: “Researchers unanimously claim that the act of reading, writing, and sharing the works of shoujo manga among girls and women greatly contributed to create a progressive and/or experimental space where various boundaries of sexual desires and sexuality are contested or reinscribed.”[1] Of course, this quote applies to the otome isekai genre as it is a subset of shoujo manga. However, what if these so-called progressive and experimental spaces for women are created by men?

When we speak of men invading a space assumed to be created by women for women, we can turn back again to My Next Life as a Villainess, as an example of that as the series’ writer, Yamaguchi Satoru, is assumed to be a man. In my research, I saw a general trend where quite a few of these otome isekai anime and manga tend to be written by men, although; admittedly it is hard to tell sometimes as many mangaka use aliases that do not give any indication of gender. Still, this is another facet that would be interesting to explore more in the future.

Ultimately, I find the increase of otome isekai manga being published to be a venue for further research in being another space of escapism and desire for women. Unfortunately, unlike otome games and isekai anime, there appears to be virtually no proper academic research centered around the otome isekai genre though that is a given considering the infancy of the genre. Until then, I plan to continue to be an active observer and participant in a growing trend that is a reflection of women who are made to be villainesses by a society who just barely allows them to carve a space of happiness and fulfilled ideals in a growing disillusioning world.

[1] Kazumi Hasegawa. Falling in Love with History: Japanese Girls’ Otome Sexuality and Queering Historical Imagination,” in Playing with the Past: Digital Games and the Simulation of History, ed. Elliot Andrew and Kapell Matthew (Bloomsbury Publishing, 2013), 138.