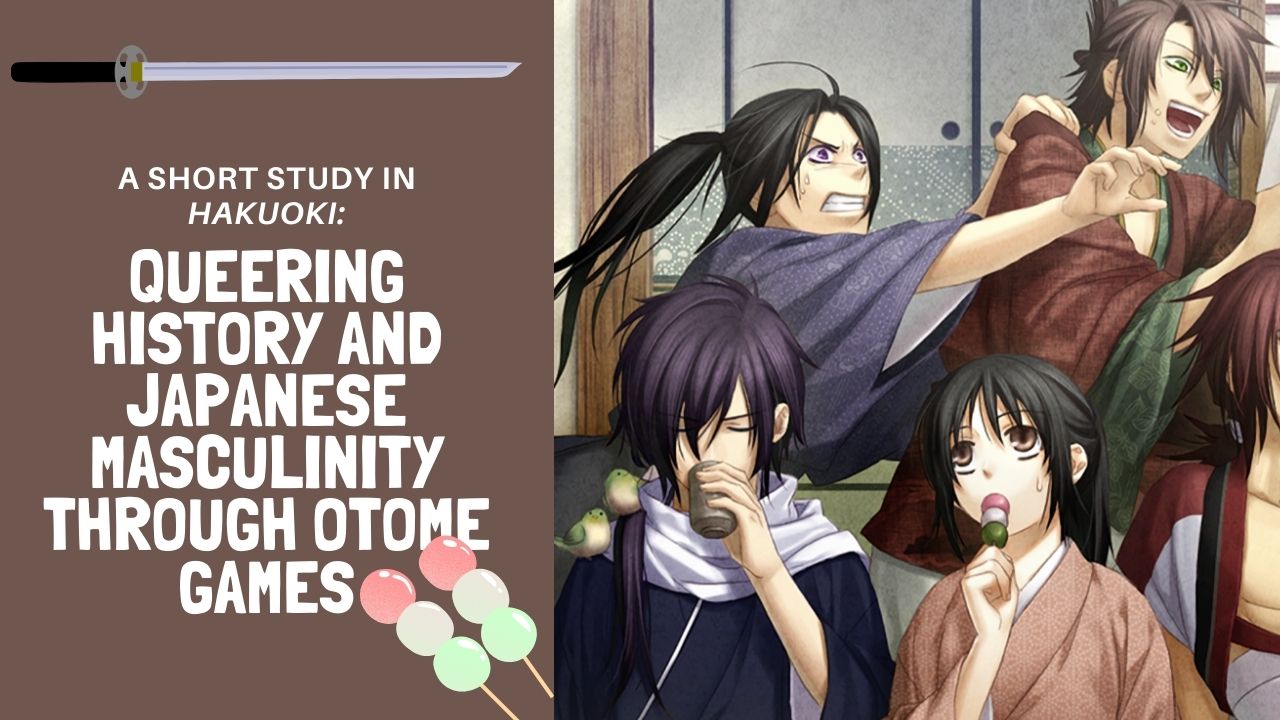 Note: This is another piece I wrote during my grad studies and thus has a more formal tone to it. This short piece is a brief exploration of women creating their own alternative histories and pleasure seeking through the popular otome game, Hakuoki.

While searching for articles on Japanese cosplay, I happen to stumble across a chapter in an anthology titled, Falling in Love with History: Japanese Girls’ Otome Sexuality and Queering Historical Imagination, by a Hasegawa Kazumi. This chapter was found within a book titled, Playing with the Past: Digital Games and the Simulation of History, which features a collection of works from different researchers who study how games and history work together to shape the way gamers interact and engage with history. Specifically, Kazumi’s piece explores Japanese girl culture through the popular otome game, Hakuoki, and explains how Japanese girls embracing the romancing in games such as this one can allow them to interact with history and create imaginative spaces and alternative narratives despite the inherent nationalistic masculinity found in the game.

Firstly, I must explain what an otome game is to the uninitiated. Otome games are virtual dating sim-like games targeted towards young teens and women where they usually play a protagonist of similar age and gender who usually has the choice of several romantic prospects in the form of pretty, hot, cute, and/or sexy young men (sometimes women). Otome games have been around since the 1990s but have exploded in popularity not just in Japan, but here in the West as well. Although, more specifically, Kazumi argues that Japanese culture allows one an opportunity to explore otome pleasure, sexuality, and sensitivity and that through historical otome games like Hakuoki, they are able to interact with history to imagine a space in the past and produce alternative narratives for the past, present and future.

Additionally, it is important to also explain just what is Hakuoki? The full title of the game, Hakuoki: Shinsengumi Kitan or in English, The Strange Ballad of the Shinsengumi, is a Playstation 2 game produced by Idea Factory back in 2008 (it is also now available as a remaster on PC through Steam as well). It uses personages from the real life Shinsengumi, a bakufu police force that was active for a short time in the 1860s. Historical figures such as Shinsengumi vice-captain, Hijikata Toshizo, and famous captain of the first squadron, Okita Souji, make appearances in the game as love interests among others for the protagonist, Yukimura Chizuru. It is interesting to note that the Shinsengumi, despite their short-lived nature, has been reproduced and represented in various forms of Japanese media over the years to the point of romanticization and reverence.

In reality, it appears that they have become the quintessential form of Japanese masculinity in the form of the samurai. The Shinsengumi was formed during a time when Japan was beginning to open its doors to the West and thus anti-bakufu forces began to revolt against the foreigners. This is where the Shinsengumi came in. Essentially being the police force for the Tokugawa bakufu, their loyalty and devotion to their country has become an iconic testament to nationalistic masculinity within the Japanese imagination. As Kazumi puts it, “The members of the Shinsengumi are iconic and romanticized figures because their stories illustrate the prototypical legends of Japanese tragic heros; some of whom died in an attempt to hold on to the old (pre-modern) and ‘traditional’ Japanese values represented in the codes of the samurai” (Kazumi 143).  She also admits that due to this, “Hakuoki reproduces the traditional nationalistic and masculine story, and gender roles that were illustrated in the story may not be radically subversive” (Kazumi 144). A sentiment that I agree with due to Kazumi’s arguments, that the protagonist, Yukimura, is just a silent protagonist that fills the role of just a lover and as the last survivor of her clan, a woman who needs to reproduce offspring to revive her clan.

However, this does not mean the women who play this game and insert themselves as Yukimura are reaffirming these gender roles. Instead, they are allowed to explore their pleasure and sexuality in these games the way they want to. Even outside of the game, fan meetings and cosplay events allow these women to cross traditional forms of gender and sexuality as many cosplay not typically as Yukimura, but as the Shinsengumi members. In this way, these fans also take enjoyment in reenacting scenes from the game with other fans and as Kazumi would say, they are “queering history.” It may appear these otome fans are reinforcing a nationalistic narrative by engaging and taking pleasure in games like Hakuoki when in fact they are creating a space for themselves that allows them to interact with the past in the way they see fit while also sculpting their present and future.

Above is a comparison of a scene from Hakuoki and a cosplay reenactment of the same scene with both women and men.

After reading such an interesting and compelling essay, I decided to look into the game myself and at the time of writing, I have completed the Steam remastered version of Kyoto Winds. Please look forward to a simple review and present thoughts on the game in the near future.