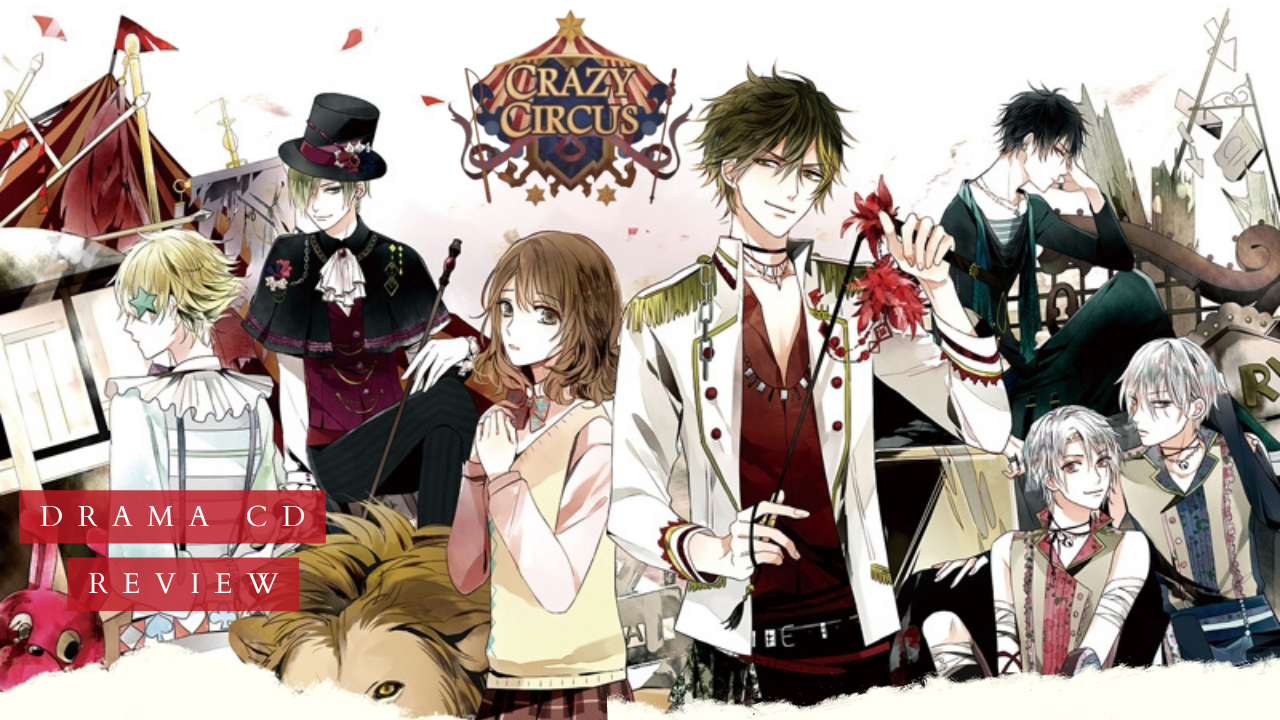 Ready for a fun-filled crazy circus adventure with really hot but slightly insane men? No, this isn’t Radiant Tale (though look forward to that next year!), but a drama series where you will encounter colorful characters with a decent mix of romance and mystery.

My first ever drama CD post, so bare with me on this one as I figure out how to format this.

You’re an ordinary second year high school student named Takizawa Rina who stumbles across a circus, “Alec Circus Troupe.” When she discovers the secret of the circus, the manager, an Fred Arnell, forces her to stay as a new member of the circus even though she actually forgot what the secret was.

Yes, I know, but it gets weirder. Every guy in the troupe has an unique ability (or really, curse honestly) that is explored in each volume. How does that play out and affect you? Well, that has yet to be seen~

Minor spoils ahead as I delve further into this crazy circus.

The Men of the Troupe

I present you the leader of the circus and the animal trainer of the troupe.

Alec is the first man you will encounter at the circus and being of the same age, you should get along with him, right? Well, thanks to Fred, you first meet Alec by ending up in a cage with his lion, Galt, and try not to get mauled to death during a show. Thankfully, Galt takes quite a liking to you much to Alec’s confusion.

Despite not wanting you there, Alec takes you under his wing after forcing Fred to do so, and you have to put up with his brash and rather rude personality. Honestly thought this guy was a tsundere at first. He ends up becoming softer and sweeter without losing his brusque personality. Alec even begins to fear you leaving the circus as his feelings for you grow.

But then, you learn that Alec has had dreams of you for the past 10 years – way before you met. And each dream ends with him killing you.

Kei is an acrobatic skilled in the usual acts like the trampoline and the trapeze. He usually performs with his twin brother, Kii, but Kii is MIA in this volume as he can’t perform for some reason.

Not one to smile and with a cold personality to boot, it’s a bit hard to properly read Kei. Not to mention, he actually finds you a bit disgusting when he realizes he can’t read your mind.

I actually liked Kei quite a bit though. Sakurai is one of the more recent seiyuus whose voice is really really starting to grow on me a lot! I thought he was a good match for Kei.

With that said, Kei is arguably the least crazy of the lot. If you’re here for the craziness, then Kei may not exactly be your cup of tea but he has his own cute and interesting moments. And with the way Alec’s volume ended, perhaps it’s nice they threw us a more chill one before you dive into the insanity again.

Ahh, Kii. Kii, Kii, Kii. He is the exact opposite of his twin brother, Kei. Very bright and a bit too talkative, Kii may be a turn off for some or endearing to others.

Similar to his brother, Kii is also an acrobat. It turns out, he had recently injured himself so he wasn’t able to perform with Kei like he usually does.

Upon first meeting Kii, he nicknames you, “Myu-chan” for no apparent reason and happily butts his way into your new life at the circus. He is a bit of an exhaustive personality but I still liked him.

Anyway, let’s get to the heart of the matter – Kii suffers dying multiple times. He takes accident prone to the max and each time he dies, he is sent back one month into the past. Poor Kii is so used to it that he depressingly thinks little of his life. Thankfully, with the arrival of you, his muse (hence the name “Myu-chan”), he thinks things can change as you work to save him from this death loop his trapped in.

But can you really save him?

Despite his more mature and adult feel, Gaku here is actually the youngest out of the boys and a year younger than you. I believe he is just a helper at the circus since he is never really assigned a specific role.

From the first moment that you meet Gaku, he warns you to leave the circus and apparently wants nothing to do with you.

Yet, he was also kind enough to carry you back to your room after you passed out for reason not made clear (or I forgot~) in the beginning of his volume. When he does that, he talks a bit to himself making it clear that he knows you from somewhere.

Even though at first his cold and distant behavior may be due to just having that personality, you constantly have dreams where he acts really nice, loving and caring over you. He even promises to protect you as well. When you bring up the dreams to Gaku in reality though, he denies being nice and deliberately continues his kuudere act. Which may have worked if in reality, Gaku also helps you here and there.

See, in his past lives, he always meets and ends up falling in love with you. Sadly, you never marry him and move on to someone else. Jealous and obsessed, he ends up killing your husband in each life.

But finally in this one life, you love him and only him, so you don’t need to worry about that, right?

My boy Sena here is a pierrot (or clown) of the circus. He is hands down the sweetest boy of the series and so soft that it hurts.

His craziness is next to zero, really. His personality is a bit too clumsy and scatterbrained to be like our yanderes up there. Instead, you will find him gifting you beautiful presents through a cat because he is too bashful to hand it to you directly – the cutie. He is also always in makeup due to becoming easily embarrassed by people complimenting his beautiful face. He’s precious.

Sena was saved by Fred and thus owes a lot to him. He goes to Fred when in trouble and we learn through dreams that Sena always has to wear his gloves and can only take them off around Fred among other things.

It is a peculiar request, but you soon learn that the reason is because Sena can erase a person’s memories by simply making direct contact (not the kind of skinship I want). It turns out that Sena is the one who erased your memories and thus why you can’t remember the secret of the circus.

Once he realizes it was him who forced you into this unfortunate fate, he aims to punish himself by suppressing his growing feelings for you and erasing his own memories of you. Thanks to the power of love, the memories come back but for how long?

Oh, this guy. Let me preface by saying that this man is present in all the volumes of the CD series. And he is suspicious in every one. Granted, he is the one who forced you to stay at the circus.

I can’t say much about Fred or his story without giving too much away. I can’t spoil everything now, can I? With that said, you can tell that Fred’s volume explains part of the craziness that’s been happening since volume 1. You find out what the secret of the circus was and why Fred was so adamant about keeping you there.

I also didn’t go over this in more detail, but I mentioned a few times already how you dream about the boys (all of them actually in their respective volumes). These dreams usually consists of looking into the boys’ past or their private thoughts. It gives you more background and the characters and why they are the way they are.

But why do you have these dreams? Amazingly, Fred seems to be keenly aware you have such dreams and wants to help you in his own suspiciously sweet way (nearly forgot to mention he is very fond of you even from the start).

I highly recommend to listen until the end for all to be revealed!

Okay, that’s all well and good, but where to listen to this wonderful series? Good question. If you want to go the legal and supportive way, then you can always buy the CDs online on legitimate sites. Yet, the easiest way is Soundcloud. Just type in the title in the search bar and playlists holding every volume should pop up (thank you Soundcloud people, true GOATS).

Sadly, if you don’t know Japanese well and want subtitles/translations, there isn’t much out there. Fear not however, cause there are some places you can enjoy a comfy translation!

I actually found out about this series through the YouTube channel of a Rua Sasayaki. They have translated only Alec and Kei’s volumes however. It seems they are recently starting on Kii’s volume as well, but at the time of writing there is only one part up.

A persona named risukadarlin on Tumblr has also provided some translations for Crazy Circus. Again, not a lot as they have only translated Alec, Kei, and Fred’s volumes from what I have seen, but it is something.

Another Tumblr you could try is the one titled: {drama cds are drugs}. The owner of that site reviewed all the volumes in more depth than I did here and provided nice summaries of what happens each volume.

And that’s about it, folks! This post turned out to be longer than I thought. That aside, I hope you will give this series a try because I personally loved the circus theme to it and each character with their own uniqueness and…craziness. The seiyuu cast for this was pretty wild too – at least for me as I’m familiar with every seiyuu in this series. That’s always a nice bonus!

I hope to come back with more drama CD posts, but having the time for them is the issue. Oh well.