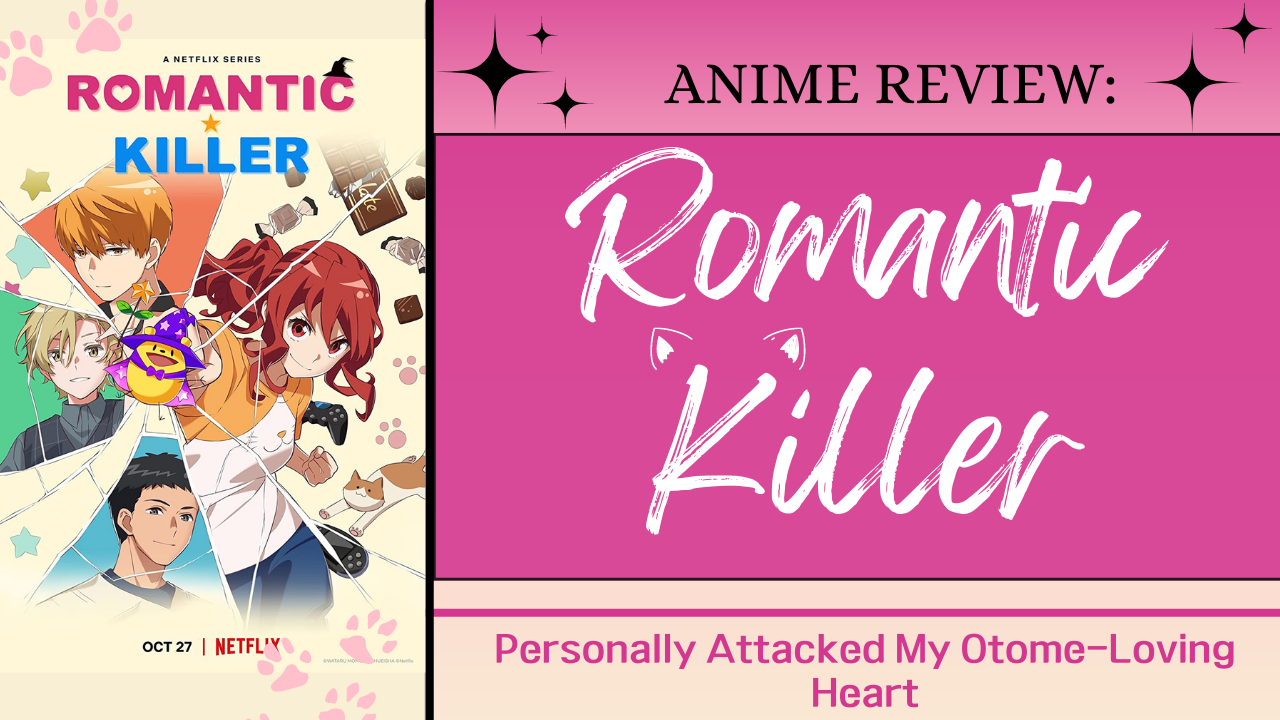 Anime, Opinions, ReviewsLeave a Comment on Romantic Killer: An Anime for Otome Lovers

Romantic Killer is an anime that just dropped on Netflix a few days ago and I had the pleasure of binging most of it the first day it came out. And I can whole-heartedly say that if you love the otome genre, you’ll feel personally attacked by this anime.

When gamer Anzu gets transported to a world of hot guys, it’s like she’s in a dream…someone else’s dream!

High schooler Anzu Hoshino has a great life. Every day she plays video games, pigs out on snacks, and pets her beloved cat. But this blissful existence is turned into a confusing mess when a magical creature transports her to an altered reality bereft of her favorite things. Now she’s stuck with hot guys instead! How can she possibly survive in such an awful world?!

As the summary states, meet our heroine, Hoshino Anzu, a girl I can honestly relate to. No, really, here I am pigging out on candy (M&Ms to be specific) but to be fair, it is Halloween as I write this. Happy Halloween~!

But I digress. Anzu isn’t actually transported from her world though. The wording of the summary above is a bit misleading as there is no isekaiing in this anime. The altered reality is right because by the power of that “magical creature” named Riri, Anzu is now stuck trying to fight off the allure of real life ikemen. She’s a gamer girl through and through, so how can reality ever beat the wonderful fantasy brought about by games?

However, despite our heroine’s determination to 2D > 3D her way through life, fate has other plans…or really Riri does.

Enter Kazuki Tsukasa. Our bonafide ikemen who is the first unknowing target Riri unleashes on Anzu and there is more to come.

Really, she is our “anti-heroine” of the series. Anzu is your typical high school girl who loves gaming, chocolate, and her beloved cat Momohiki. But one day, that is all taken from her in order for her to find romance – a thing she’s been shunning all her life. Will she succeed in avoiding all the flags of romance or end up falling for one of the ikemen?

Riri is the bane of Anzu’s existence and the reason she is living the dream of most girls into otome and shoujo manga. They are always found with a smile on their face surely scheming away at what classic (read: cliché) otome/shoujo trope they can throw at Anzu.

The first ikemen who falls victim to Riri’s matchmaking antics. A rather stoic and cool-headed guy, Tsukasa goes to the same high school as Anzu. He holds a little more to him than the usual cold and closed-off ikemen love interest but you be the judge.

The second ikemen to enter the scene. Junta is the childhood friend of Anzu that Riri apparently whipped into existence for the sake of having that particular shoujo trope. Ethics aside, Junta is too nice that it hurts and whether shy, so his one-sided love of Anzu that he has had since childhood has gone unsaid.

And last but not least, we have the ouji-ikemen, Koganei Hijiri. Hijiri is the rich boy of the lot. After an accident with Anzu left him rejected for the first time ever from a girl, he seeks out the ways of the commoner, starting with working part-time with Anzu at the local conbini (convenience store).

There are other minor characters like Anzu’s friend, Saki (CV: Iwami Manaka) and Tsukasa’s friend, Makoto (CV: Shimono Hiro) who appears to have a crush on Junta honestly. Actually, Saki has a whole episode, episode 10, dedicated to her where they explore her background and how she became friends with Anzu. It complements nicely with the last couple episodes of the series, but I can’t spoil anything so watch for yourself please.

Also, Tsuda Kenjiro is in this as Hijiri’s chauffer, Tsuchiya, and even though he was a minor character, he was in it enough for me to be happy and that’s all that matters.

The Anime’s Strong and Weak Points

Overall, I believe the anime was a pretty solid watch and as I stated in my opening that I would recommend you to watch this especially if you love romance and otome. Now, the anime does poke fun at and makes light of some of the tropes and cliches presented in the genres but overall it’s refreshing and funny to see for the most part.

But here’s a summary table to clearly show the strengths and weaknesses of the anime since my writing is a mess.

And that’s all, folks! I personally loved this anime and definitely already labeled it a comfort show to watch in the future when I need a pick me up. Not everyone may agree with me, but that’s okay. There are plenty of similar anime out there that explores the otome isekai genre. I’ll definitely have to continue may journey through that genre from here.

Please stay tuned for more posts like this and more!