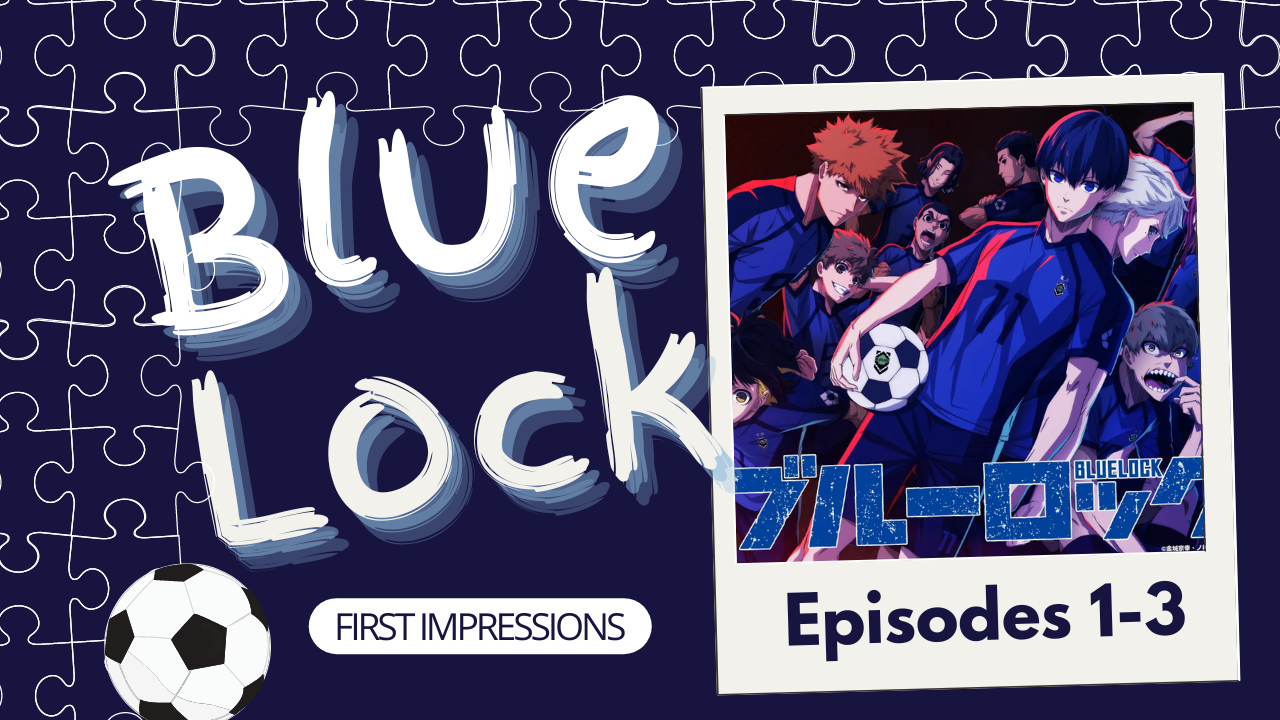 Slightly different from my usual otome posts, I’m switching gears a bit to talk about Blue Lock, a new soccer anime that has come out this season. Since there are only 3 episodes out at the current time of writing, this should be a quick one.

Though if you do want an otome first impressions post, I did one on the Brothers Conflict otome game turned anime here.

Note: Of course, there will be spoilers (this includes images) so proceed at your own risk.

First, I’ll start with the story. Mind you, I want to preface by saying that I am completely blind to Blue Lock, so forgive me for the sparse details here and there (especially about the characters).

Yoichi Isagi is a virtually unknown high school soccer player who dreams of glory and fame in being to greatest soccer player in Japan, no, the world. Yet, after a devastating lost in a qualifier to reach nationals, Isagi feels lost and upset over his future in soccer. That is, until he is recruited by the JFU (Japanese Football Union) along with 300 other players into their new program, Blue Lock. Blue Lock is an experimental program presided over by Jinpachi Ego, an enigmatic soccer expert, who aims to create the best egotistical striker the world has ever seen. Only 1 will be chosen out of the 300. Will it be Isagi or one of the other 300 players? Only time will tell.

This section will only cover the main characters of the first 3 episodes. For those who are fans of voice actors or seiyuus, I’ll list them out below their character as well.

So far I don’t have any favorites but that may be because everyone seems pretty interesting to me, especially those on team Z (who we’ll get to later). Of course, I couldn’t add everyone despite there being more standout characters in the first 3 episodes so apologies if I missed out on your favorite.

Honorable mention to Igarashi here. This boy is either hated, disliked, or people care so little for his presence that he’s just a speck on the screen for them. Does…anyone like him?

I just wanted to make a quick section on the animation because some of the shots from this anime are something else. The intensity of some of the expressions, the eyes focused selfishly on a goal of theirs only, the absolute rage when confronted with the ugly truth – all of that captured beautifully in this animation. It’s in these moments where it seems like the animation shines even brighter.

Visuals from episodes 1-2 below.

This being the introduction episodes starts off with us witnessing the intense last few minutes of the qualifying match between Isagi’s school and a rival school who has their own star shooter, Ryousuke Kira. As mentioned in the story, Isagi’s team loses which sets in motion Isagi’s desire to improve to become the best striker using the Blue Lock program even if it’s pretty crazy.

No, I kid you not. The first thing these kids have to do is a sort of tag game where one has to basically shoot the ball the others to pass being “it” to them. The last one with the ball is kicked out of the program and will never play for the Japanese national team. Harsh, I know, but Blue Lock is basically Battle Royale. My brother even likened it to Squid Game (oh dear).

It’s here that we get a glimpse at the personalities of the other guys Isagi is stuck with. There are a total of 12 to a room (there’s rooms A-Z, and our guy is stuck in Z). With the tag game, it goes down to 11 after Isagi mercilessly kicks the ball into Ryousuke Kira’s face in the last few seconds of the game. And boy, did Kira not take that well (see animation section).

This episode started off with a brief little recap of Kira being smashed in the face with Isagi’s brutal soccer shot. He is eliminated and thus leaves in a rage. Isagi, sort of at a loss himself as to why he shot the ball at Kira turns to the one who passed him the ball in the first place, Meguru Bachira.

Bachira is…something else entirely. When we first see him in the anime, he is soundly asleep on the floor of the room seemingly without a care of what was going on. Yet, he wakes up and expertly dodges being tagged with style and even takes the ball from Isagi who was “it” and passes it back to him later to score a hit on Kira’s face.

I found him a rather eccentric fellow but I like him. Seems like we can call him Isagi’s first friend in the room of 11, I guess? The two bond a bit together this episode by working out together on the field. This is where Bachira opens up about the monster inside of him that says things to him when he plays soccer as if that isn’t a bit creepy and/or concerning. But whatever helps him play soccer well, right?

Their bonding time is interrupted by the announcements of their physical test results and the impending first match against the next room, team X.

To keep a long story short, team Z’s match goes pretty badly. First of all, they waste little time fighting amongst themselves because everyone wants to be the one to take a shot at the goal. Not without reason as the one who is the top scorer of the game gets to move on to the next selection and avoids elimination. Thus, the infighting begins between what I’d say are the top hotheads of the group, Rensuke Kunigami and Jingo Raichi.

The worst fire-blooded duo who are honestly a perfect match for each other really. I already know there are some of y’all out there shipping these two. Wouldn’t be surprised if they were the most popular ship of the series. But I digress.

The other team is a mess as well as everyone selfishly wants to be the shining star until one of them, Shouei Barou, breaks free from the huddle around the ball, runs with it and scores without breaking much of a sweat. From there, it’s only up for team X while team Z suffers goal after goal against them until they’re 0-5.

It looks pretty helpless until Bachira comes up with a plan to work together with Isagi to score a goal to at least bring some hope and unity in the team despite only a few minutes left in the game.

It’s amazing because the plan works with Isagi aiming to shoot the ball into the goal until Barou comes up out of nowhere to block him. Here, Isagi could’ve went and tried to shoot himself, or pass the ball onto Raichi or Kunigami. Isagi aims to shoot…until he doesn’t and somehow finds himself passing to Kunigami who ends up taking the shot and successfully scoring team Z’s one and only goal of the game.

And this leads to Isagi once again questioning if he has the drive to become the best shooter/striker in the soccer world. Even Barou straight up tells him he has no talent to be one. As Isagi stood there shell-shocked over his subconscious decision to pass over shooting, I couldn’t help but feel sorry for the guy.

I’m definitely going to continue watching Blue Lock. I was really surprised by how the whole anime went down as I expected it to be more in line with other sports anime like Kuroko’s Basketball. Yet, this feels more like a Hunger Games situation where the very concept of soccer as you know it is turned on its head. As Ego mentioned, what you know about soccer has to start back at 0 because watching Blue Lock is definitely not going to be the typical soccer experience you’re going to be used to.

Now, I don’t know much about soccer. Most I do is watch the World Cup which is coincidentally this year next month and maybe the Champions League and Premier League when I want. But I do like watching soccer over any other sport and I was happy to hear that a proper soccer anime was going to be made (and it has some of my favorite seiyuus? Nice).

(Side note: While writing this last part up, I found another soccer anime, Ao Ashi, that just finished up airing in September. May look into that as well!)

Even though Blue Lock was a bit different from what I was expecting, the spirit of soccer is still there. I also really am interested to see Isagi’s journey through Blue Lock along with the others as well. It’ll hopefully be satisfying to see the growth and character development not just in Isagi but the rest of the ensemble cast where I already see favorites in Bachira, Kunigami, Raichi and even in characters we know less about like Sae Itoshi (a manga favorite although some fans are upset over his Japanese VA possibly ruining the character due to a recent scandal).

All in all, a pretty solid start to what I can see will be a strong addition to sports anime. Let’s just continue to observe if it’ll continue to live up to it’s name going forward.