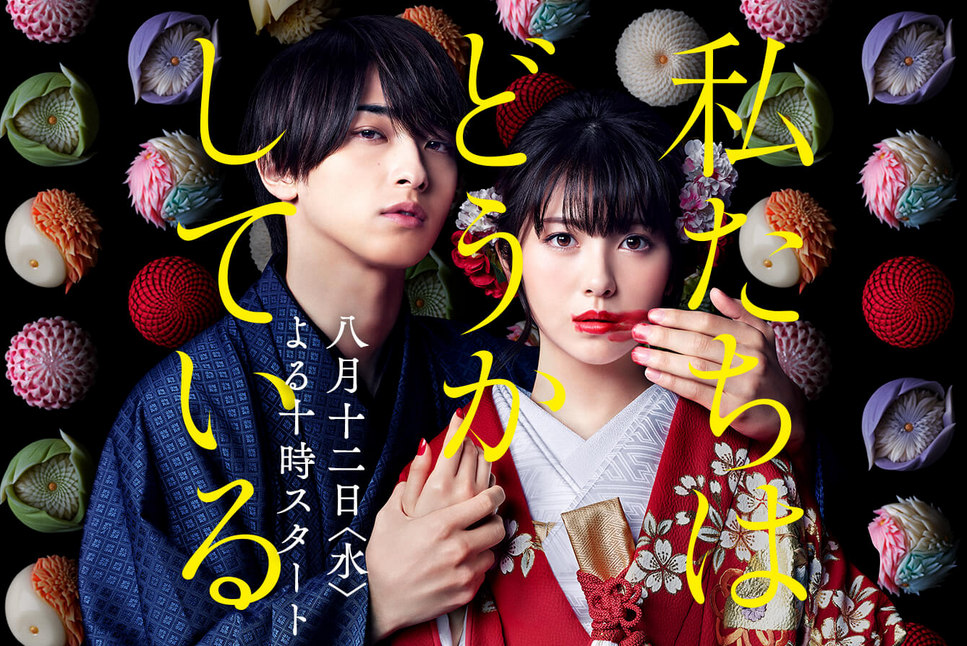 Watashitachi wa Douka Shiteiru or Cursed in Love is a bittersweet drama centered on two traditional Japanese sweets makers and the tragedy that has tied them together since childhood.

So I just watched this drama a couple or so weeks ago and as one of the first posts to inaugurate this blog, I decided to write up a quick blurb about it. I swear to do better in the future if I continue to do drama reviews but I’m still not too well-versed in the field so bare with me.

If dramas aren’t really your thing than I recommend my anime review posts here and here. Or if you do like dramas, why not check out some of my K-drama reviews on my K-pop blog here and here.

Cursed in Love focuses on a young traditional Japanese sweets maker named Hanaoka Nao. When she was a child, her mother, who was also a sweets maker, moved into the prestigious well-known traditional Japanese sweets confectionary, Kougetsuan. There, the 6 year old Nao meets the 6 year old Takatsuki Tsubaki. Tsubaki is the kind and adorable young heir to Kougetsuan and the two become fast friends.

All was well until that fateful day when someone murders Tsubaki’s father. Tsubaki was the first to discover the body and the criminal. Shockingly, he accuses Nao’s mother of the crime. From there, their worlds diverge. Nao’s mother is arrested and later dies in prison. Meanwhile Nao grows up following her passion of making traditional sweets.

The drama is one of romance but is full of mystery and suspense as Nao must find out the truth of her mother’s crime. Even if it means marrying the one she hates the most – Takatsuki Tsubaki. The two cross paths once again and it is within that fated meeting that he springs an unexpected question: Will you marry me?

That’s enough summary, now onto the review. I don’t plan to spoil anything major in this review because I actually do recommend watching this drama. It’s only 8 episodes long. Each episodes clock in at about an hour each. Although, the last episode is basically a movie at an hour and 40 minutes.

Yes, this drama is based on a manga that I just happened to stumble across in a Barnes and Noble. I picked the 2nd volume cover because it best exemplifies the feelings they have for each other in the beginning of the drama. Nao is so determined to find out if her mother is the true killer of Tsubaki’s father, that she even goes as far as considering the marriage proposal from an arrogant Tsubaki.

I picked the 2nd volume cover because it best exemplifies the feelings they have for each other in the beginning of the drama. Specifically, Nao is determined to find out if her mother is indeed the true killer of Tsubaki’s father even going as far as accepting the marriage proposal an arrogant Tsubaki puts forth.

Well, she accepts and is back at Kougetsuan, the scene of the crime. Yet, now she has to act like she’s going to wed Tsubaki, who doesn’t appear to remember her. As a child, he called her Sakura instead of Nao since the Kanji that makes up her name can be read either way. But that doesn’t mean he’s forgotten about the girl he used to call Sakura.

Nao wasn’t that bad of a female protagonist considering the genre we’re talking about here. Granted, this is the FIRST Japanese romance drama I’ve watched so I could be wrong but I’ve watched my fair share of K-dramas and read enough shoujo manga to make some sort of judgement. Though this manga is categorized as “josei” (=targeted towards older women), so keep that in mind.

Anyways, I didn’t find her too weak and was a bit surprised at her unwavering resolve to see things through to the end. Even when Tsubaki asked her if she was really Sakura, she denied it. Even when they started getting close and she could see her lies hurting Tsubaki, she still kept quiet and continued on with her little spy mission.

Nao was literally in a den of wolves where the only good person turned out to be Tsubaki funnily enough (the bumbling fools in the kitchen staff don’t count). I didn’t have too much of a problem with her nor did I get too annoyed by Nao’s actions and most didn’t seem to contrived.

Look, I’m writing this like 2-3 weeks later so I could be forgetting some details but overall for a character, I’d give Nao a high mark. She has her faults but she could’ve been worse.

I couldn’t really find a proper colored photo of just Tsubaki so I just made do.

For Tsubaki, his character was actually quite surprising to me. I thought he was going to be the typical arrogant jerk who abuses the poor weak female protagonist. While the girl turns out to be a masochist because she somehow excuses his terrible behavior and falls in love with him regardless.

I mean, with all the sudden hand grabbing and the fact that he kabedons her at one point, he almost falls into that trope. But, Tsubaki turns out to be a rather nice guy.

If you consider who he grew up around then it’s a wonder he grow up with some consideration for others. His mother is the typical evil soon to be mother in law.  She is desperate at any cost to protect her precious Kougetsuan. Then we have his grandfather who hates him enough to leave him behind to die on some railroad tracks. Yes, this happened. He was a child when it happened, but the sentiment is still there.

Though he can be rather rough with his intentions, he shows a genuine care for Nao and sincere hurt when he finds out that she truly is Sakura. It’s good to note here, that Tsubaki hated Sakura, too, for reasons I won’t get too into as it’s a bit of a spoiler. But in the beginning of the manga, he did say if she appeared in front of him, he’d make her disappear.

Yet, when Nao is revealed to be Sakura, he seems more hurt by the fact she kept it a secret from him. I thought he was going to be more upset that the person he hates the most has been under his nose the whole time. Even when the reasons to doubt her piled on more and more, Tsubaki seemed to be in denial. He genuinely started to fall in love with the Nao he knew.

The above stills are from episode 5 which I think is a good episode to watch to understand what I mean. The episode literally starts with him saying he believes her after asking Nao if she is Sakura which she denies, of course.

In short, his character is also pretty solid and shows adequate growth as the drama goes on. Definitely not as toxic as he may seem at first. The promotional poster for the drama did no favors to his character or did it?

This woman. She’s the true antagonist of the drama and at first seems like the one dimensional evil mother-in-law to be, but there’s more to her than meets the eye. Hell, they even give her a spin-off to really hammer home her background and I guess give her a more solid character story.

I only discovered this was a thing while I was writing this post up, so I haven’t seen it yet but I’ll probably get around to it – if I can find it on a good site. Apparently, it may be on Japanese Hulu which means…gotta arm that VPN.

There are other pertinent characters like Tsubaki’s grandfather, and the mysterious man who gives Nao the catalyst which fills her with the determination to find out the truth about he mother, but I think the three above deserve their own little spotlight.

Also, I couldn’t find any good photos of the grandfather and I didn’t feel like scour the drama for good images, but I’d say he is of equal importance as the Okami up there.

Okay, so what did I actually think about the story and is it a good drama to watch? I would say so. The story is pretty engaging and even though it can be a bit too convenient sometimes, things end up alright in the end. The ending is kinda cheesy – I mean, they name drop the title with lovey dovey eyes but it’s the end, so I’ll give it a pass, I guess.

Additionally, I would say another reason to watch this besides the story is those Japanese sweets.

My God, even when I read the manga, those sweets didn’t move my stomach as much as the drama did. I was a bit bemused when I first picked up the manga and saw that it was centered around something as arbitrary as wagashi or traditional Japanese sweets. Yet, it was amazingly interesting seeing the process and aesthetic-looking end result. I mean, look at those sweets!

Ah, if you don’t know what wagashi is exactly, let me pull up the old Wikipedia entry which says:

Wagashi are traditional Japanese confections that are often served with green tea, especially the types made of mochi, anko (azuki bean paste) and fruits. Wagashi are typically made from plant-based ingredients.

So yeah, that’s it. Terrible review, I know, but I’ll try to create a more structured review format for the sake of clarity and organization. I’m just hoping to create more of these in the future for this little blog of mine.

Thank you for reading and I hope that if you do give this drama (or manga) a chance, then I hope you enjoy it.

To end with, here’s Tsubaki’s actor, Yokohama Ryusei, uh, rubbing himself up against a defenseless kitty: