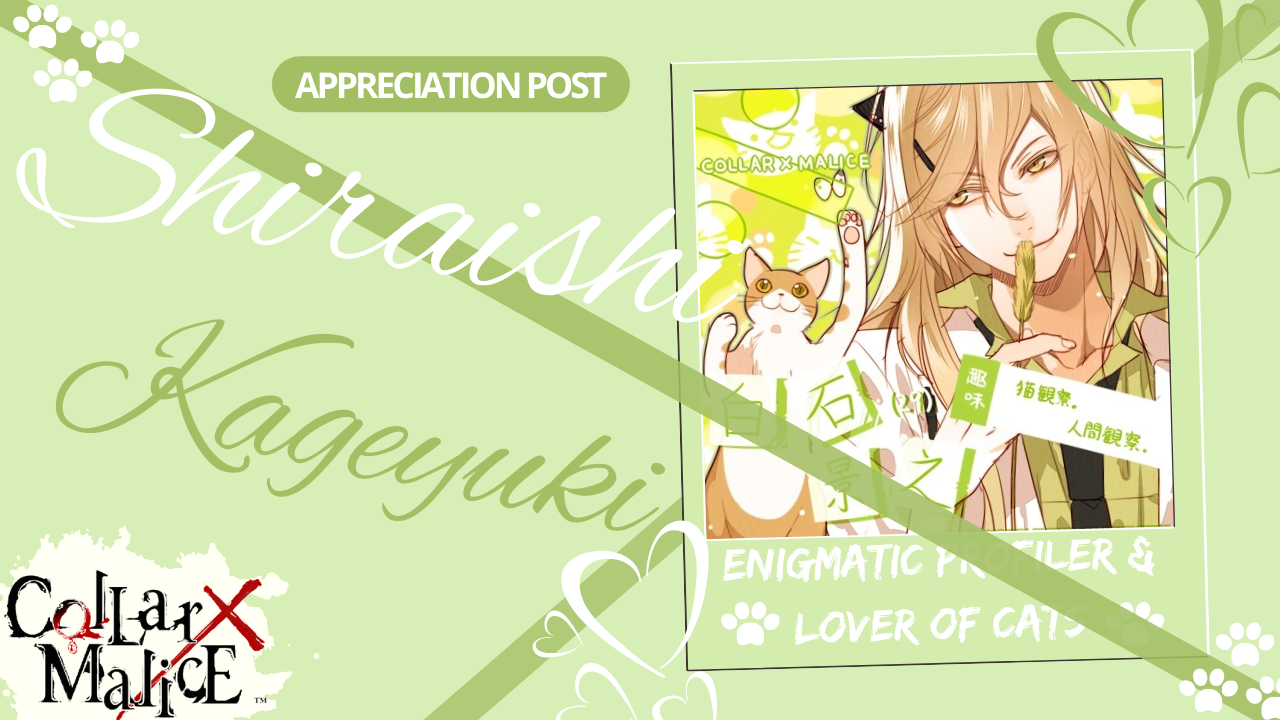 Oh lord, where should I even start with this man? I honestly believed he would be my worst route, yes, even worse than Sasazuka. And of course, I had to do these two back to back. Honestly, I did feel the most stress doing Shiraishi’s route because playing blind is not for the light of heart.

But, I’m happy to say that through all the brain work, emotions, and stress, I really did enjoy his route, but boy, it was a trip.

If you want to check out my other Collar x Malice appreciation posts, just click on the name you’re interested in below:

So let me start off by saying that this man has kind of ruined his characters for me. I discovered this man’s YouTube channel early last year and have been a pretty regular viewer since. You know how they say that learning about the voice behind the character can break immersion? That’s kind of what happens for me with Kimura’s characters. In a good way, mind you.

It’s just too funny hearing his voice in these characters after watching him play games like Resident Evil, Among Us, Genshin, Ib (of all things, love that game), and etc. But of course, the amazing thing about seiyuus is that their vocal performance can make you forget the actor/actress behind the character. Kimura is certainly one of them.

Also, side note, but this dude is in soooo many otomes. Literally, the first 3 otome games that I bought for my Switch (CxM, Piofiore, Cupid Parasite) has him in it as one of the love interests. Heck, even an otome I’m playing on a PSP emulator, Snow Bound Land has him in it, too! Like, Jesus man…chill out (lol).

That sounds very broad to just say I liked his personality but, I really liked his whole personality…like everything. Don’t get me wrong, in the beginning he is mildly annoying with some of his philosophies and the way he handles people inconsiderately, but he improves.

On the other hand, you also have to take the time to understand why he says or does the things he does. Shiraishi is surprisingly innocent in ways. See, thing is, the man’s upbringing was a very sheltered and rough one. He didn’t even have a name. They just referred to him by a number. Due to the fact that the ones who raised him were Adonis, of all things, no wonder he turned out the way he did.

Thus, he isn’t used to people in the way a normal person would be. Still, once you learn about his past and have a few talks with Yanagi who expands on Shiraishi’s attitude and personality, at least you come to understand and even accept Shiraishi as he is.

That’s it. That’s all I have to say. I’m a sucker for seeing love interests as kids because they’re always inevitably so adorable. Shiraishi is no different. Just look at him. How did such an adorable boy become such a cynical and snarky man is…well, actually believable considering Adonis had a hand in his upbringing.

This one is also self-explanatory. Not only does he love playing and hanging out with stray cats, he also wears cat motifs like the little badge on his jacket and the cat hair clips. It’s cute.

It is kind of sad though that he only uses numbers to name the cats similar to how he was named under Adonis. Still, maybe that’s easier to remember?

5. His Duality is Something

Okay, this could technically go under personality but I just thought of specifically pointing this out. Namely, I thought of a couple CGs where on one hand he looks so devious and on the other hand, he looks so innocently gleeful that it rocks my heart a bit.

Not to mention that because Ichika makes an earnest effort to understand him, he really does begin to open up and do things he normally wouldn’t do. Like doing his best to make her dinner and even behaving himself for her when confronting persons of interests. Yes, some of it was a ploy on his part as an Adonis member, but a lot of it was genuine.

This is was the only route where Ichika becomes really close to Mukai and Sakuragawa, the two lovely ladies of Collar x Malice. I really loved the two of these women and wished they popped up a bit more in each route (though Sakuragawa kind does). Shiraishi’s route was made a bit lighter by the Shiraishi Bashing Coalition scenes and I appreciated that whole-heartedly.

I hope to see more of Mukai and Sakuragawa in Unlimited, please and thank you.

From Ichika being kidnapped by Shiraishi to their confrontation with Zero and finally afterwards with Ichika falling into a coma for months, to say it end was anything but a rollercoaster is a lie.

Even after she wakes up, there is still obstacles to get over and poor Shiraishi has to do his best to overcome them mostly himself. And this is the end, remember? At the time, I was pretty dumbfounded on what was happening and was asking my Twitch chat if that was really the good/best ending. It was just a bit surreal hearing the ending music when so much felt wrong and there still seemed to be plenty of story to be had (lol).

Well, anyways, long story short, everything was alright by the end. A true Christmas miracle indeed.

(And let’s not talk about his tragic ending. That was…even more of a punch in the gut than I was ready for.)

And that’s all, folks! I swear, after I finished Shiraishi’s route, I had to recuperate for a week before I started Yanagi’s route since I knew Mr. Serial Smoker was going to give me another rollercoaster ride, too. I’m serious, these last two routes will give you the biggest grief of the game.

So, I must say, prepare your feels before you start Shiraishi’s route. Love him. Hate him. His route will be a memorable one for you, I promise.