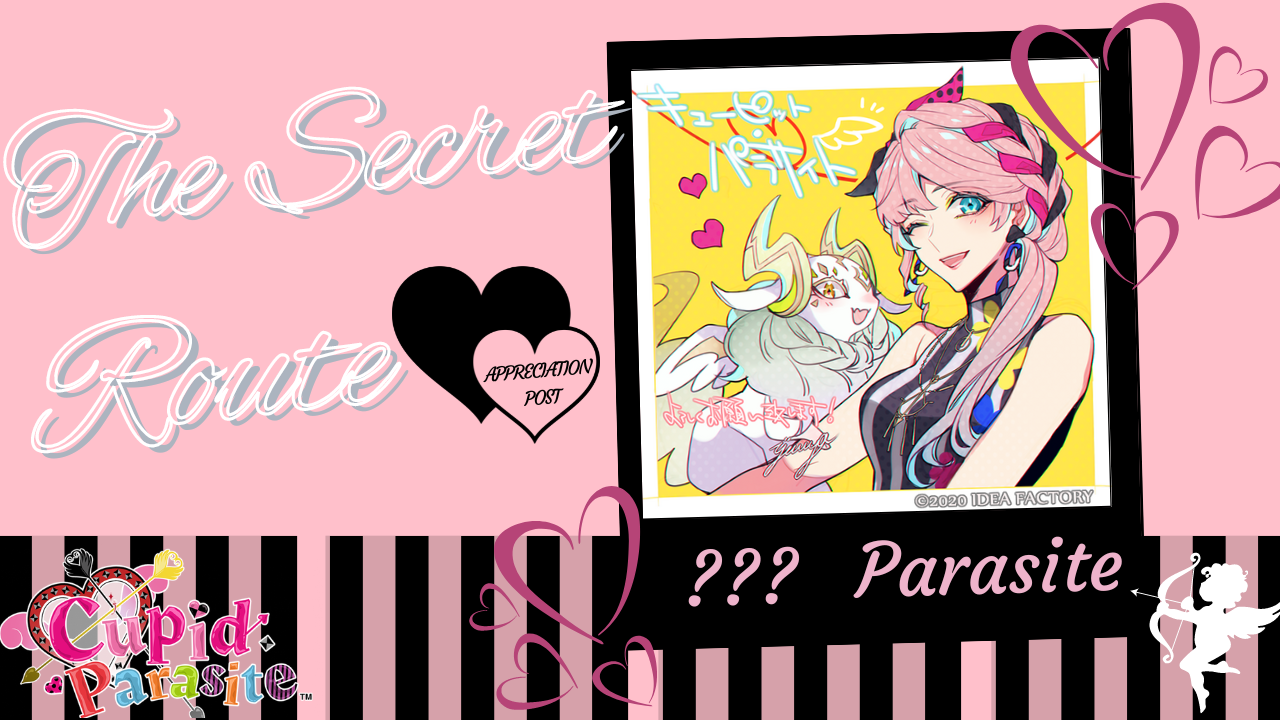 My first appreciation post honoring a secret route in an otome game. Sadly, I can’t just say his name right from the start as I don’t want someone accidentally being spoiled as they browse my blog or when I post this on social media like Twitter or Pinterest.

But for those who don’t mind being spoiled or already know who CupiPara’s secret route is, please read on!

Basic info on the secret route:

I have done two other Cupid Parasite appreciation:

I realize Allan is in sharp contrast to our dear secret route here, but I can appreciate both, okay? I’m probably a minority but I don’t care! Anyways onwards to the meat of the post.

Why this man also deserves all the love:

And somehow Okamoto pops up again in one of these posts. If you didn’t know, I wrote up an appreciation post on Piofiore’s Yang, who is also voiced by Okamoto. Coincidence? Well, if this happens a third time than I have to accept that I really like this man’s characters.

Still, Peter and Yang don’t completely sound alike (though sometimes they do especially when Peter has to act as Jupiter. The low cadence to his voice and some inflections on the words sound like Yang to me). Also, it’s just baffling to think two completely different characters are voiced by the same person.

At first, when I saw Chii, I’m not going to lie his design caught me off guard. I mean, compared to Daifuku from Olympia Soiree who is conventionally cute, we have Chii is like a mini beastly ram-like creature. BUT his appearance grew on me and when one Twitch viewer of mine dared to slander him, I banned him! Okay, not really, but I didn’t stand for the Chii slander in chat either. Chii’s been through a lot, okay?

Anyways, appearance aside, I really loved Chii’s personality, too. I personally thought that Chii was just a divine beast tied to Jupiter. Why? Because in Ryuki’s route, he causes a storm that knocked out the power in Los York to the extent that the trains stopped! I still wasn’t sure if that was just a divine beast’s powers or Jupiter himself.

Still, can’t believe the Lord Jupiter himself started a storm that knocked out power across the whole city over some dog food (I’m not joking).

This man was really out here eating dog food like a pig. I love him.

I also wanted to add that he didn’t become Chii for the hell of it. He even admits he doesn’t particularly like that form. However, it was easier and more mobile to be around Lynette to make sure she stays protected. Also, it helped him escape Celestia, so there’s that.

3. He is Sensitive, oh so Sensitive

Peter becomes known as the Sensitive Parasite in his route since this man is scared of women, acts extremely jumpy over files dropping to the ground, sticks chopsticks into paper shredders, made a complete mess of Lynette’s house after being scared over some bugs, and a whole lot more I can’t get into.

To be honest, I found him kind of relatable as a jumpy person myself. I mean, he is basically just a socially awkward jumpy mess who barely understands how to get through life like a lot of us here. That’s why I felt a bit more connected to him than the other love interests.

4. He Acknowledges His Weaknesses but still Tries His Best

This point connects to the last point. Peter isn’t sensitive just for the sake of it. Have you heard of the story about the Kronos, the titan who devoured Jupiter’s siblings? Jupiter was only saved when Rhea, his mother, tricked Kronos in swallowing a rock (a rock, really?) instead. In turn, Jupiter was sent to live on earth with nymphs and constantly aware that he was still in danger 24/7 due to his father still being alive.

Mind you, don’t underestimate a titan’s power now. Not to mention Jupiter was still a kiddo (I think?). Regardless, being constantly told to stay ever vigilant with the added pressure that you were the one destined to save your siblings must have taken quite the psychological toll on Jupiter.

Not to mention, afterwards he was always in Zeus’s, his twin brother’s shadow. Zeus, who truly had all the qualities of being the god of gods if only it wasn’t for his vanity in being the one true god to rule over humanity. When the other gods and goddesses sealed Zeus away, Jupiter was the one put in charge even if he didn’t necessarily feel the desire to or feel equipped to take such a job.

Honestly, I do feel quite bad for Jupiter. Still, despite not really liking being the god of gods to the point of even questioning why gods existence in the first place, he still does his best to rule over the Dii Consentes as best as he can…even stretching some rules in the process.

5. He also Wants to Save Lynette

In his route, it is revealed that Jupiter also wants to save Lynette from disappearing as Cupid. Back in Allan’s route, after learning how Lynette became Cupid, it’s easy to become upset and grew to hate Jupiter. It doesn’t help that Jupiter casts lightning bolt after bolt at a defiant Allan who was trying to prevent Jupiter taking Lynette away from him…again. I know I was disgruntled towards Jupiter, if not a bit disappointed.

Still, both men (demon? God?), thought they were doing what they thought best for Lynette. They just had different approaches.

At least they end up working together in the end in Jupiter’s route:

But let’s go back to Jupiter’s plan. In order to save Lynette was to make her part of the Dii Consentes, unlike Allan who wanted Lynette to become human. The goddess of marriage, Juno, has been missing for over a decade and Jupiter has recently sense that she’ll never return. Thus, he believes Lynette would be the best replacement. It’s revealed that Jupiter has been observing Lynette since she was an angel in heaven and grew to like her from watching her life in heaven (this is why he saves her from being Nyx – fatal occupation).

If it had been up to him, she would’ve stayed an angel with Allan, but apparently Mercury’s word in this matter is even above Jupiter’s. Crazy, I know. No wonder Jupiter felt disillusioned as a god.

But our man here thinks up a solution of sending Lynette down to the human realm to not only learn more about humans and love in order to become Juno, but also to protect her from an unknown deadly force bent on destroying the both of them.

When I tell you I was surprised to find how passionate this man was in love-making, you’d wonder if I forgot the genre of this game. I just felt like the game made it a point to emphasize how Jupiter was unlike how he is presented in the myths – as a voracious womanizer.

Well, once he is shot by Cupid’s bow and falls in love with Lynette, that side of Jupiter is shown to definitely exist. The voracious part, not the womanizer part. The constant kisses and nuzzling is one thing, but as soon as Lynette turned her head, exposing her neck, Peter wasted no time nibbling away at her neck.

Like, my goodness, they even dedicate a whole CG to his love bite (above). At least, after that one moment of passion, Peter asks if he can bite her like the gentleman that he is.

7. Lowest CG Count of the Routes but Still Quality CGs

Speaking of CGs, Peter has the lowest amount of CGs for a love interest but I loved each one. I don’t have much else to say here besides it was definitely a case of quality over quantity and I’m not upset about it one bit.

8. No Choices on His Route? No Stress.

I was so confused when I was going through my CupiPara walkthrough and saw them acknowledge the secret route but not add a guide for it. Then I quickly realized once I started playing that there are no choices during his route! Hallelujah!

Hey, some people may find that boring, but for me who sweats buckets over one wrong choice, I found that liberating. I could enjoy Peter’s route stress-free and without having to go back and painstakingly collect missing CGs either. Nice.

I only finished this man’s route a couple weeks or so ago and I’ve already replayed the start to his route. I haven’t finished and I do skip a bit here and there, but can you blame me when I just heard the same things not too long ago?

I have yet to replay a route in any otome game I’ve played so far. Not even with Collar x Malice. Although, I’m not going to lie, those Trigger Modes that game has can be a bit off-putting if you’re not feeling up to it.

Plus, Cupid Parasite is just easier to replay since it has a more relaxed and carefree vibe. A big comfort game you’d play with some milk and cookies wrapped up in a nice warm blanket. Unless, you’re playing one of the more spicier parts, than the nice cold milk might not be enough. Have some water by your side, too, yeah?

10. He Certainly Made Me Feel Things…

I sort of feel embarrassed to admit this since this was certainly a first (sorta), but some feelings I had during Peter’s route were confusing to me. For instance, the first time Lynette and Peter properly make out, I started to feel a bit numb myself. What does this mean, guys? It was a cute and somewhat hot moment, of course, but moments like that had happened before in the game and I never felt the way I did until that point. Not even with Allan and he’s the demon incubus.

Well, whatever. I just know that I find my man, Peter, to be an awkward cutie I can get behind. And that’s all that matters.

And that is the end! I hope you liked reading on this lovely Parasite. If you couldn’t tell, yes, he is my favorite of the lot and I’m unashamed in admitting so. I do like the other guys, of course, but I guess I’m a bit more soft on Peter. Weird, I know. But I also feel as if secret routes need more love, so this is just a little something I can do, you know?

Anyways, stay tuned for more appreciation posts across otome games. I wonder who’ll be next?